A question came up: Has contemporary science fiction become too self-absorbed, or does it still have the capacity to cross over to a mass audience? If so, who are the authors and books that have managed to do so? And who do the folks in our Roundtable discussion group think are likely candidate to break out of the genre and find a large non-genre readership in the future–and why?

I confess I read so little of this, but I do read a lot of historical fiction, and it seems to me in just the last year there’s been some kind of sea change, so much of this stuff looks old and worn and second-hand to me. I just read a book of Catherynne Valente’s, Deathless, that felt fresh and vigorous, and as they used to say about the death of the novel, just wait until a live one comes along.

I oversee the publication of a line of leatherbound “classics” for my publishing house. Recently, we were granted the rights to reprint The Foundation Trilogy. That book needed no introduction to my editorial board, most of whom are not well-read in science fiction; they were familiar with the title and Isaac Asimov’s name. The names of Robert Heinlein, Frank Herbert, and Philip K. Dick (thanks in no small part to the stream of movie adaptations and the two Library of America compilations) were also immediately recognized, and William Gibson got a nod when his name was conjoined with “cyberpunk.” But though there are many science fiction authors whose work I enjoy and admire, it occurred to me that many do not have the kind of name recognition that suggests they are breaking out beyond the genre to a wider readership.

It seems to me that the breakout success of Paolo Bacigalupi’s The Windup Girl points towards a paradigm for reviving SF: topicality, self-contained neat ideas, appealing characters. Maybe a little optimism about the future too wouldn’t hurt!

I think it’s interesting that while science fiction books are generally shunned by the larger, mainstream audience, relegated to the genre ghetto, the same people that would say, “oh, I don’t read that stuff” will line up to buy tickets to a summer blockbuster — and when was the last time that a hugely popular, every multi-plex in the country sort of hit, did NOT involve an alien or a superhero or a wizard or a vampire?

Why are our tropes so widely accepted except in print?

(Yes, it’s a sweeping generalization, but…) 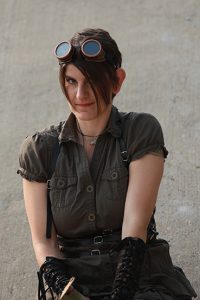