Over the weekend, I re-read Heinlein’s Citizen of the Galaxy.

I use the word “re-read” loosely, however; I am certain that I read it as a teenager but have no memory of the plot, characters or themes. This may be the first post in a series about the RAH books I read during those years – which would be all of the ones published before 1983ish – but can’t remember all that well. Because the biggest thing that I’d forgotten about Heinlein is how fiendishly enjoyable his books are, even if you have some qualms about some of the issues they bring up.
Citizen of the Galaxy is one of RAH’s classic juveniles: boy meets older mentor who is something of a genius, mentor dies, boy becomes man of honor after Thrilling Adventures. While the plot is predictable, the texture of the adventures make it worth the read.
Others have mentioned how seamless Heinlein’s worlds are but I’m always gobsmacked by them, even now. You know that the writer was only showing the iceberg’s tip of what he knew about any of his imagined outposts — like Jubbulpore or the Free Traders’ Sisu — but what he chose to show was exactly what you needed to know. All of the needful stuff is condensed into the man’s clear prose, which is never enamored with its own cleverness. In other hands, such concision could be a dull read but this reportorial approach works in Heinlein’s hands.
I’d also forgotten how academically-based a lot of his cultures are. Citizen has the subtext of an anthropology primer while it tells a fast-paced coming-of-age story that captures the scope and imagination of space opera. The ending – which falls just as Thorby, the boy in question, launches himself in a new direction – seems to imply that Heinlein was going to revisit Thorby’s continued quest in another work. Does anyone know if that was intended? Or begun? And have you re-read any Heinlein lately?
(A note, however, on editions. Unless you are a big fan of reading a book that doesn’t appear to have been proofread, avoid the U.S. Pocket Books publication. I suppose I should be happy that the book is still in print but wish that Pocket had forked out the extra cash for a decent proofreader.) 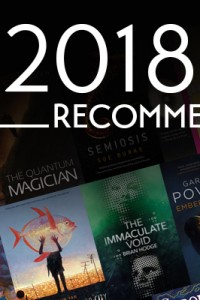 40 thoughts on “Because it was there”

Patricia A. McKillip was born in Salem OR. She went to San Jose State University in California, receiving a BA in 1971 and an MA in English in 1972. Her first publications were short children’s books The Throne of the Erril of Sherill and The House on Parchment Street (both 1973). Her first longer novel, The Forgotten Beasts of Eld (1974), won a World Fantasy Award. Other SF/fantasy novels include