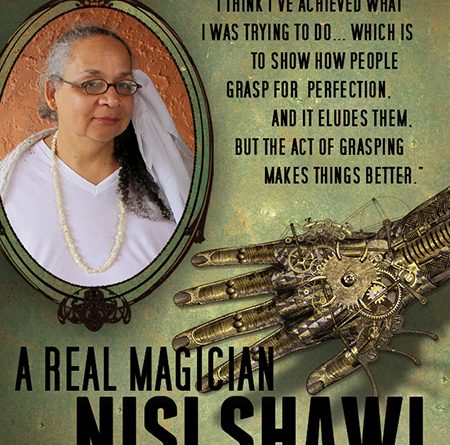 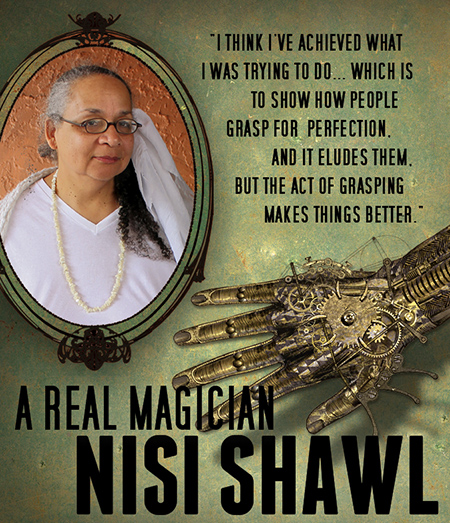 Denise Angela Shawl was born November 2, 1955 in Kalamazoo MI, where she grew up. (Her cousin Delores came up with the nickname ‘‘Nisi.’’) At 17 she moved to Ann Arbor, where she attended the University of Michigan. After leaving the university she worked various jobs, including as a bookseller, au pair, cook, janitor, and artist’s model (she was the model for one of Rick Lieder’s illustrations for the 1990 Arkham House edition of Bruce Sterling’s Crystal Express). She moved to Seattle in 1996. She has worked on publicity for Clarion West, and currently serves on their board. She helped found the Carl Brandon Society.

Her first published story was ‘‘I Was a Teenage Genetic Engineer’’ in Semiotext(e) SF (1989), but she began publishing steadily in the ‘90s, after attending Clarion West in 1992. Notable stories include Gaylactic Spectrum Award finalists ‘‘Shiomah’s Land’’ (2001) and ‘‘The Tawny Bitch’’ (2003); Carl Brandon Award finalists ‘‘Wallamelon’’ (2005) and ‘‘Black Betty’’ (2013); and World Fantasy Award nominated novella ‘‘Good Boy’’ (2008). Collection Filter House (2008) was also a World Fantasy finalist, and won the James Tiptree, Jr. Memorial Award. She was guest of honor at feminist SF convention WisCon in 2011 and in conjunction with the convention, Aqueduct Press published her story and essay collection Something More and More.

Her first book was nonfiction Writing the Other: Bridging Cultural Differences for Successful Fiction, co-written with Cynthia Ward, and she has taught many classes and workshops on that subject (and others). She edited The WisCon Chronicles 5: Writing and Racial Identity (2010) and Bloodchildren: Stories by the Octavia E. Butler Scholars (2013), and co-edited Strange Matings: Science Fiction, Feminism, African American Voices, and Octavia E. Butler with Rebecca J. Holden (2013) and Stories for Chip: A Tribute to Samuel R. Delany with Bill Campbell (2015). She has also published numerous essays and book reviews, and has been a reviewer for The Seattle Times since 1999.

‘‘When you’re writing things from a historical viewpoint, you don’t want anachronisms. What you have to watch out for is assuming that one kind of historical viewpoint takes precedence over another. You’ll hear people say, ‘Lovecraft was a racist, but that was just his time.’ No it wasn’t. My grandfather was alive then. There is the axis of time and historicity, but there are plenty of other axes: gender, class, and so on. All those things go into an accurate portrayal of someone’s viewpoint. There’s a problem I ran into with a short story called ‘Vulcanization’, which is from the point of view of King Leopold, whom I deliberately excluded as a viewpoint character from my novel Everfair because he was such a wanker. He was a complete jerk, but I did write a short story from his point of view. It was a horror story. The anthology I wrote it for didn’t want it because I used the ‘N’ word in the second line. That’s how Leopold would have described black people! I was trying to be true to his viewpoint, and this editor couldn’t handle it. They said that because I’d written the story in close third-person, people would conflate the character using that term with the author using it – that they would think I was using the ‘N’ word. So I sold the story to Nightmare, because they were like, ‘This is what he would have said.’ The line proves that Leopold is a jerk, and it’s serving a purpose.

‘‘I got the idea for Everfair after I was forced to be on a panel at the World Fantasy Convention in 2009. There was one panel open, and it was on steampunk, and I decided to go at the last moment. Filter House, my short story collection, was up for a World Fantasy Award, and a short story from the book was nominated as well. I had two nominations, so I had to go. The convention said, ‘You can be on a panel about steampunk.’ I had not read much of any steampunk, and I didn’t like it – steampunk stunk. I stepped back and thought, ‘Why do I dislike steampunk so much?’ It had everything I loved. I love reading Victorian literature. I love that sense of a different place, milieu, different mores, and I’m somewhat kinky for hard machinery, for steam and gears. So why shouldn’t I like steampunk? I realized it was because steampunk so frequently validated colonialism and imperialism. I set about looking for examples of steampunk that didn’t do that, and didn’t find very much. This was in 2009. I had not heard of the work of Diana Pho, or any of the other people who were questioning that imperialist slant. I found two or three stories, so I said, ‘I’m going to do this, obviously.’ That was when I got up in front of a room of hundreds of people and said, ‘I’m going to write a steampunk novel set in the Belgian Congo.’ Michael Swanwick rolled his eyes at me. I said, ‘I will make you beg to read it.’ So then I had to do it.

‘‘I was reading about Fordlandia, Henry Ford’s capitalist utopia in South America. It was a rubber plantation, with rubber manufacturing facilities. I thought, ‘What if someone did that with the goal of creating a socialist utopia?’ I remembered the Fabian Socialists in Britain had started the London School of Economics, so maybe they had the money, and they could have bought some of Leopold’s land in the Congo. He was only in it for the money anyway. That’s where the idea came from.

‘‘I did tons of research. Heaven knows, I could have done more. It would have been really great to visit the area. It’s hard to write about cultures that have been decimated. Millions of people died in those areas. So much of what I would have liked to portray has been lost. I’m waiting to hear from people whose ancestors are survivors of Leopold’s horror, and I’m sure they’ll tell me things I got wrong. I did have some help. One of my favorite resources was called African Reflections, basically a hardcover catalog of an exhibit at a museum. The exhibit constituted these everyday objects from the area that I was writing about, the Eastern Congo and central Africa, from the time I was writing about, or slightly advanced, from 1910 on. I was able to look at these photographs, and the essays that accompanied them were very insightful. Of course I read some of the racist, bigoted, prejudiced anthropological texts as well, and tried to skew those slightly, and take into account the bias.

‘‘I think I’ve achieved what I was trying to do – although Michael Swanwick hasn’t begged to read it yet – which is to show how people grasp for perfection, and it eludes them, but the act of grasping makes things better. That’s what I was trying to get with the story of the country itself. That’s what’s going on with the country, and that’s what’s going on with the love story – nothing will be perfect, because we’re humans, but we’ll try, and we’ll be better for it.

‘‘I conceived of the novel as a standalone, but I have been asked to write a sequel. The sequel will be very different. I have ideas for it. Because I cover so much territory in Everfair – it spans 30 years – I’m not going to do that again. Eleven viewpoint characters! What was I thinking? I can tell you what I was thinking: people need their own voices. Now I’m going to try this out with a short story. What happens next in history is the tension between petroleum and renewable energy sources. I think that’s the next battle in the global sense of things, and it’s one that Everfair would be caught up in.

‘‘My editor for Everfair is Liz Gorinsky, and she’s excellent. One of my characters, Rima, is sort of a mashup of Zora Neale Hurston and Josephine Baker. She’s from Florida, and she talks about kissing someone’s kitchen. I tried to put the phrase in context. Liz questioned it: ‘What’s a kitchen? This is part of a building. Why is someone kissing a kitchen?’ I explained what it means, and she said, ‘Oh, maybe you want to make it clearer to other readers.’ I said, ‘It’s okay with me if people are confused. I’m more excited that other people will be thrilled to see it included.’ It was more important to me in that particular instance that someone would say, ‘Oh, I know that,’ than that a few people would say, ‘What?’ It’s okay if some people are a little lost if others are deeply found.

‘‘When people asked me when I was young what I wanted to be, I’d say I wanted to be a magician. Pull rabbits out of hats? No, a real magician. I was writing early, too. I’ve memorized the first poem I wrote, which goes, ‘It’s spring / the crows are singing / and old ladies are wearing new hats.’ That was in second grade, so I was maybe seven years old. When I started actually being conscious of writing prose for a purpose was in ninth grade, when I wrote a dystopian romance novelette, science fiction set after some unspecified end of the world where people went around to different engineering sites, and were basically being reverential about bridges and highway construction, because they didn’t have those things anymore, so they were in awe of them.

‘‘I read science fiction as soon as I could read.”

Read the complete interview in the October 2016 issue of Locus Magazine. Interview design and author photo by Francesca Myman.

Comments from the 2016 Locus Poll and Survey