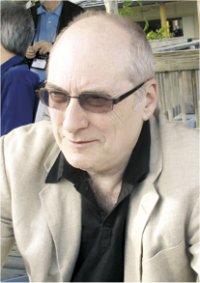 John Clute was born in Toronto, and grew up there and in Vancouver, Winnipeg, and Montreal. He attend New York University, where he earned a BA, wrote columns and reviews for several years, then moved to London in 1968, where he has lived ever since.

His first important SF criticism appeared in New Worlds in the late ’60s, and in the ’70s and ’80s his work began to appear regularly in publications including F&SF, Omni, the Washington Post, the Times Literary Supplement, the New York Times, The New York Review of Science Fiction, the Los Angeles Times, the Observer, and others. He is now one of the field’s most respected critics. His reviews and criticism have been collected in Strokes: Essays and Reviews 1966-1986, Look at the Evidence: Essays and Reviews (1995), Scores (2003), and Canary Fever: Reviews (2009). He explored apocalyptic impulses in The Book of the End Times (1999), and The Darkening Garden: A Short Lexicon of Horror appeared in 2006.

Though best known as a critic, Clute is also a poet and fiction writer. His first professional publication was long “SF-tinged” poem “Carcajou Lament” (1959) in Triquarterly, and his first SF story was “A Man Must Die” in New Worlds (1966). First novel The Disinheriting Party (1977) was not SF, but 2001 novel Appleseed was an ambitious literary space opera.

In 1960 he was associate editor of the short-lived magazine Collage, where he published work by Harlan Ellison and R.A. Lafferty. He helped found Interzone in 1982, and co-edited five Interzone anthologies (1985-91). He served as reviews editor of Foundation from 1980-90, co-edited Tesseracts 8 (1999) with Candas Jane Dorsey, and edited a collection of Robert E. Howard tales, Heroes in the Wind (2009).

Clute’s numerous honors include a Pilgrim Award from SFRA (1994), an Eaton Grand Master award with Peter Nicholls (1995), and an IAFA distinguished scholarship award (1999). He married Judith Clute in 1964, and the two were the subject of Polder: A Festshcrift for John Clute and Judith Clute (2006), edited by Farah Mendlesohn. They both live in London, though both spend much time abroad. Clute’s partner, Elizabeth Hand, lives in Maine.

“For two or three years now, I’ve been using the term Fantastika, because I don’t like ‘the Fantastic,’ partly because, for Anglophones, the term tends to exclude science fiction. In some European languages, fantastika designates science fiction and all the other literatures that SF shares significant characteristics with, so I’m just pulling that usage over to English. It does strike me that it is much more useful and enjoyable to think of how one models science fiction and defines it, in the same intellectual space as one’s modeling of fantasy and horror. To make that tripartite modeling — which is obviously Procrustean, with regard to all the texts that have been created since maybe 1750 or 1760, when (in my view) Fantastika begins — does allow a lot of clarity. Some might call excessive clarity a poison chalice, but as far as the Encyclopedia of Science Fiction is concerned, this work makes it possible to begin to really speculate about the next century.

“As far as I’m concerned, all the literatures of the fantastic are related — perhaps in a parodic, perhaps in a dancing-dervish fashion — to the planet itself. They are planetary fictions. When I think of horror over the last 60 years since the end of World War II, it strikes me that the central function is not the traditional recovery that fantasy is involved in exemplifying and that so much literature necessarily gives us to believe is possible, but that the central function of horror is coping with amnesia. That the world we have been moving into is a world that has progressively evacuated most of the meanings that allow people to make sense of their lives. That the dissolution of the boundaries between privacy and the rest of the world is part of the same reduction of the capacity of memory to make sense, the capacity of our cultures not to create what I’ve called in a couple of pieces ‘cenotaphic fiction.’ Much of the world that has been created since World War II is a set of cenotaphs, monuments to that which is not there: vacancies, absences.”

“We’re now about halfway through the writing of the third edition of the online Science Fiction Encyclopedia. That’s what I like to say, but the book is such a complex entity and it grows in so many different ways as you do it that to say ‘halfway’ just means we hit a million new words, we hit ten thousand entries, we hit this, we hit that, and we’re halfway through the alphabet in terms of how many words are left in all the other comparable reference books I was looking at. So when I say ‘halfway through,’ it’s very rough. And with a bit of blitzing, maybe two years of 24-hour-a-day work, we’ll finish it off in jig time!”

“I don’t mean to imply I think completion is possible. We can finish a version, but we can’t complete the enterprise. Pragmatic decisions are being made constantly, and the progress through the alphabet is slow but constant towards the end. Given the online structure of the Encyclopedia, which allows us to put down a default version when we get it done, we are able to globally update the entire Encyclopedia — not in Wikipedia fashion, harum-scarum, but in a regularized monthly fashion. I’d like to have a beta version up in about a year, one which would have maybe two-thirds of the book and most of the major authors, going through and picking up some of the harder tasks so I don’t have nightmares about them

“One of the next projects on my list is Robert Silverberg, a lot of work so I want to get him out of the way. And Marty Greenberg, for instance, who has well over a thousand titles. When I was staying with my mother in Toronto about a year ago, he was not the part of the alphabet I was working on but I thought, ‘OK, I’ve got all these notes; why not just spend a few hours every day doing Marty Greenberg?’ Hours which would otherwise have been wasted on wine, and other kinds of intoxicating forms of life, were spent listing Marty Greenberg, and I felt so good at the end of that! Page after page after page, but it’s done.”

This review and more like it in the September 2009 issue of Locus. 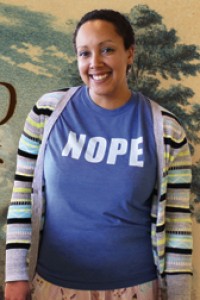