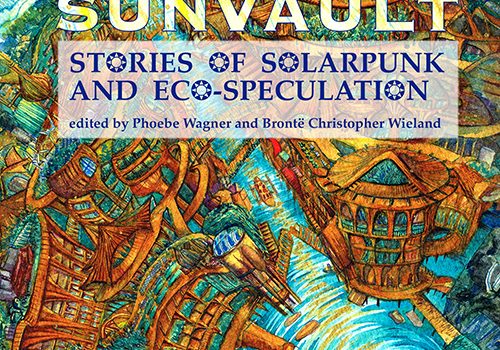 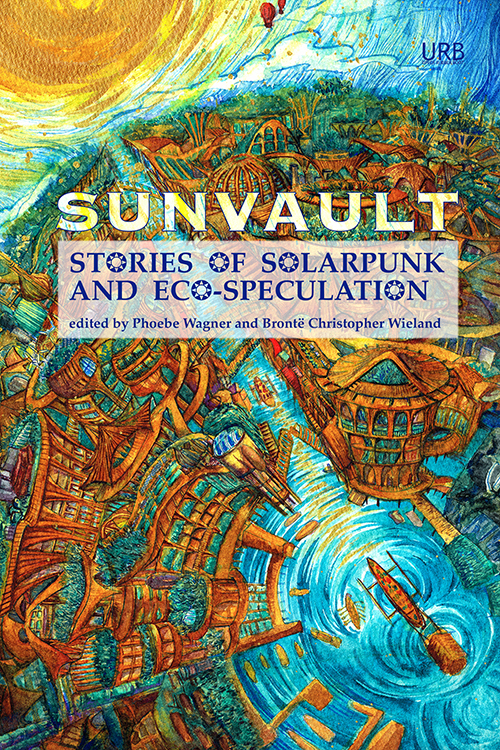 Falling into the futurology/climate change category we discussed last month, like David Brin & Stephen W. Potts’s Chasing Shadows, is Sunvault: Stories of Solarpunk and Eco- Speculation, edited by Phoebe Wagner & Brontë Christopher Wieland. It’s a bit unclear precisely what ‘‘solarpunk’’ is, or what distinguishes it from all the other sub-categorizations in our genre, and I’ll leave that for more astute critics to figure out (assuming that we ever hear anything about solarpunk again; remember the few months a couple of decades back, before it was exiled to the graveyard of dead genre sub-classifications, when everybody was briefly talking about ‘‘cowpunk’’?). The anthology’s introduction describes solarpunk as ‘‘a new movement in SF that examines the possibility of a future in which currently emerging movements in society and culture such as the green movement, the Black Lives Matter movement, and certain aspects of Occupy Wall Street coalesce to create a more optimistic future in a more just world.’’ This sounds good – I myself have been calling for less despair and nihilism in SF and more stories set in ‘‘a more optimistic future in a more just world’’ – but some of the authors here don’t seem to have gotten the message, since the anthology doesn’t deliver material like that frequently, but instead mostly features bleak stories where all the battles have been fought and lost.

The best story here is Lavie Tidhar’s ‘‘The Road to the Sea’’, an autumnal but mutedly lyrical look at a society struggling to survive and put itself back together after most of the world as we know it has been destroyed by catastrophic climate change. Also good is ‘‘A Catalogue of Sunlight at the End of the World,’’ by A.C. Wise, another autumnal story about the people, mostly older folk, who choose to remain behind on an Earth with a rapidly shrinking habitable zone, while their children set off in generation ships to seek refuge out among the stars. It’s quietly moving in many ways, but hardly ‘‘optimistic.’’ Jess Barber’s ‘‘You and Me and the Deep Dark Sea’’ and Tyler Young’s ‘‘Last Chance’’ are also poignant, but rather bleak, the Barber showing the population of a small seaside community learning the hard lesson of working together to survive in the face of ongoing catastrophic climate change, and the Tyler, until the twist ending, set in an Earth rendered completely uninhabitable, with the only humans surviving in deep-buried underground cities. The story here that seems to do the best job of conforming to the self-described tenets of solarpunk is Nisi Shawl’s ‘‘The Color of Money’’, which takes place in the alternate-world setting of her recent novel Everfair, and deals with political maneuverings to keep natural resources out of the hands of rapacious large nations.

So, a number of strong stories and some good reading here, but there’s no real reason why the majority of the stories couldn’t have been published in an ecological/climate change anthology rather than a specifically solarpunk one. It’s interesting to see what the next solarpunk anthology, if there is one, is like. Sunvault also features a large number of poems and illustrations, and strong reprints by Daniel José Older and Nick Wood.