The 42nd International Conference on the Fantastic in the Arts (ICFA 43) returned as an in-person event this year, held in sometimes sunny, sometimes overcast, but always muggy Or­lando FL on March 16-20, 2022, at the Orlando Airport Marriott Hotel. The theme was “Fantastic Communities”. Nisi Shawl was the guest of honor, and Farah Mendlesohn was guest scholar. Academics, writers, publishers, editors, artists, students, independent scholars, and more gathered for the conference; registration was smoothly managed, with 339 checked in on site including volunteers, according to registrar Em­ily Midkiff. It was a smaller group than the last few years, but still a healthy showing for ICFA, and not a surprise since we are just getting back to face-to-face events. The gator of ICFAs past has apparently relocated and so was not in attendance.

It was clear from the atmosphere and conversations that people were happy to be back in person and able to mingle again. Programming was well attended and varied. There were 111 events on the program, from readings by authors and poets, to paper presentations, to creative panels, etc. Topics were often related to the theme, though the span of ideas discussed was broad and discussions covered literature, TV and movies, gaming, and social and historical aspects of fantasy and community. Papers covered themes like “Nation, Representation, and Community”, “Space, Place, and Community in The Gothic”, and “Legend Tripping, Legend Telling, Legend Taking: Folklore as Explo­ration”. Programming highlights included GOH Nisi Shawl’s keynote “The Bird in the Bush: Semipermeable Selfhood”, hosted by Eileen Gunn; Farah Mendlesohn’s talk, “Science Fiction Communities in the Rainbow Age” hosted by Rick Wilber; and panels on science fiction, discussions of race and identity, utopias and distopias, rage and hor­ror. The BIPOC Caucus generously added to the programming selec­tion with panels, readings, and more, including The Counter Space, an “abstract ideal, an international and transracial think tank;” Coffee with Creatives, a panel reading; and Brave Space programming, an approach to “racial desegregation and interethnic sensitivity.” There were also two inaugural Safe Spaces and the BIPOC Caucus’s inaugu­ral food event, which was a Saturday meet & greet brown bag lunch after guest of honor Nisi Shawl’s talk about “Depicting Your Truth.”

Always a popular event, the Flash Play Festival, coordinated, di­rected, and hosted by Carrie Cole with co-host Jim Kelly, included five short plays that all had to incorporate one of three common props and include the line, “Time has lost all meaning.” They were A Garden of Domestic Tranquility by Ellen Klages, Robots are Nonbinary by Scout Storey, The Lost Profession of Dr. Magister by Jeanne Beck­with, Get Real by Jim Kelly, and Adrift by David Shipko.

Saturday’s awards banquet was well attended and the food was ex­cellent – ICFA raised the culinary bar a few years ago, and it contin­ues to live up to its reputation. IAFA president Dale Knickerbocker opened the evening with a land acknowledgement of the Seminole and Timucua peoples and a thank you to organizers and judges.

The first award was a tribute to Brian Attebery, who has been the editor of the IAFA journal JFA for 16 years and is stepping down. He received a plaque in recognition of his time as editor. Iuliia Ibragimova won the David G. Hartwell Emerging Scholar Award, which gives a $250 stipend “to the graduate student submitting the most outstanding paper.” Szilvia Gellai won the Jamie Bishop Memorial Award “for a critical essay on the fantastic written in a language other than English.”

Farah Mendelsohn received the IAFA Distinguished Scholarship Award “recognizing distinguished contributions to the scholarship and criticism of the fantastic,” also the Robert A. Collins Service Award, a “special award presented to an officer, board member, or division head for outstanding service to the organization.” Jim Casey also received a Robert A. Collins Service Award.

Winners of the Lord Ruthven Awards include The Transmedia Vampire: Essays on Technological Convergence and the Undead by Simon Bacon (McFarland) and A History of the Vampire in Popular Culture: Love at First Bite by Violet Fenn (Pen and Sword), tied in the Vampire Non-Fiction category; The Night Library of Sternendach: A Vampire Opera in Verse by Jessica Lévai (Lanternfish) in the Fiction category; Elizabeth Miller “for her foundational contributions to vampire, specifically Dracula, studies” in the Special Recognition category; and Midnight Mass in the Media category. Gary K. Wolfe presented the Crawford Award to Midnight Doorways: Fables from Pakistan by Usman T. Malik (Kitab) for best first fantasy book.

The awards banquet closed by welcoming Pawl Frelik as the new IAFA pres­ident. First VP Valorie Ebert also noted with gratitude Bill Clemente’s years of service as IAFA treasurer; he is stepping down this year, and the board wel­comes Sean Nixon as the new treasurer. A farewell reception by the pool closed the events for the weekend.

Rather than attempt a hybrid conference in the spring, the IAFA decided to have a second, fully virtual online conference in October. The next in-person ICFA is planned for March 2023 at the Airport Marriott in Orlando FL, with the theme TBA. 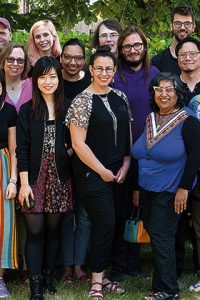