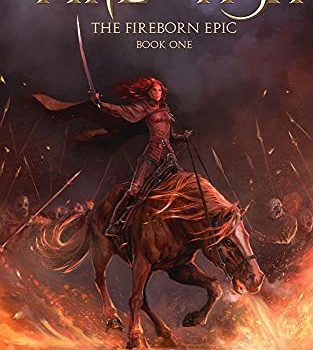 Young-adult fantasy novel, first in the Fireborn Epic series. An exiled princess longs to ride one of the magical steeds warriors use.

Standalone decopunk SF novel set in an alternate Roaring Twenties Chicago where a shell-shocked soldier must develop his latent telepathy to save himself from old enemies.

Fantasy novel, the second in the Rook & Rose trilogy. A con artist, a vigilante, and a crime lord fight to free their city from a dark and ancient magic.

Fantasy novel, second in the Chronicles of Stratus series. Stratus starts to remember he’s a dragon trapped in a man’s body — and he wants revenge.

Members of a peaceful commune uncover dark secrets when they investigate the disappearances of two outsiders: PI Travis Wren, who has a knack for finding people, and his target Maggie St. James, author of macabre children’s books.

Young-adult science fiction novel. Black teen caught up in gang violence in South London can slip into a space outside time and glimpse the future, and uses the power to save himself and the girl he loves. Soon to be a Netflix movie.

Goedjen, Tara: No Beauties or Monsters

Urban fantasy novel, 12th and final in the Alex Verus series. Anne, Alex’s lover, is being controlled by a deadly creature, and is preparing to create an army of mages.

SF novel, the third in the Nova Vita Protocol space opera trilogy about a family of space smugglers caught in the middle of a war.

Young-adult post-apocalyptic SF novel, the first in a series. Ara, the only female to survive a plague, tries to follow her father’s plan to end the plague, until a crew of men catch her. Originally published on Wattpad 2016-17.

Williamson, Michael Z.: That Was Now, This Is Then

Military SF novel, second in the Temporal Displacement series begun in A Long Time Until Now. A U.S. convoy in Afghanistan finds itself thrown back to Earth’s Paleolithic age, along with many other displaced groups from other times.

February 5, 2014 admin Comments Off on New and Notable Books, February

The Locus Roundtable blog is live!

Welcome to the launch of the Locus Roundtable blog. We dedicated some time at the end of last year to work with our intrepid web editor, Mark R. Kelly, making plans to add to and streamline our online space; the most notable changes include the news feed on the homepage and this latest addition, a team blog covering topics of SFnal interest. Our starting line-up of contributors includes various reviewers,