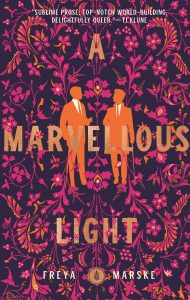 In Freya Marske’s debut, A Marvellous Light, Edwardian London is mostly familiar: those with titles, like young baronet Robert “Robin” Blyth, are awarded positions based less on qualifications than on family connections, and Robin knows his career in His Majesty’s civil service – middling as it is – is the result of, simply, inheriting a minor hereditary title. In this England, the gentry have power, but so do the magicians. Magic exists, and it’s everywhere, if you know where to look – if you know it exists.

At the start of A Marvellous Light, Sir Robin does not know anything about magic, nor why he’s been appointed liaison to the Office of Special Domestic Affairs. All he knows is that his immediate predecessor, Reginald “Reggie” Gatling, mysteri­ously disappeared, and Robin is his replacement. He hasn’t even been told of the job’s duties; that is, until he meets his position’s counterpart, Edwin Courcey, the liaison to the British Magical Assembly.

Robin is self-assured, athletic. Edwin is icy, intellectual. They immediately dislike one another. Edwin respected Reggie, and is concerned by his disappearance. More pointedly, Edwin is enraged that a “gentry-party-guy” like Robin is now his responsibility to train, or “unbushel” in the basic ways of magic. For Robin to do his job as liaison – hopefully, temporarily – he has to be shown the rules and the (very British) clandestine bureaucracy that governs it. After all, the mission of the Office of Special Domestic Affairs is to help cover-up magical happenings seen by the general public.

At the end of his first day on the job, Robin is brutally attacked by a group of magicians and cursed with a powerful, painful runic spell. Between Reg­gie’s disappearance, Edwin’s love of a mystery, and Sir Robin’s magical outsider status, the two men are forced into an alliance and travel to the Courcey family estate to research in its enormous library.

Once at the Courcey home, Marske slows the novel’s pace. We spend a lot of pages cringing at the dysfunctional Courcey brood – Edwin’s sisters and brothers and various friends and well-wishers are vacuous, facetious, and cruel. Edwin was born with the smallest amount of magic in the family, and is treated by all, except his chronically-ill mother, as a joke. In magical families, ability is the equivalent of money in Robin’s world: not earned, but inherited, and meant to be wasted on entertainment or prestige. Marske thoroughly draws this comparison between the magical world and the “mundane” gentry. We learn a lot about magic and politics, but not much about what is going on with Reginald’s disappear­ance, Robin’s curse, or why either are important (aside from the fact that Robin’s pain grows worse as the curse, literally, spreads). It’s heavy handed, hammering home the old adage of power and cor­ruption, but winds up serving a critical purpose – to build common ground so the two men can fall in love.

After accidentally discovering Edwin’s gay erotica in the library, Robin, himself a gay man, finds himself attracted to Edwin. Edwin, though initially disgusted by his easy machismo, becomes interested in Robin – who, as it turns out, may have some untrained magical ability himself.

Until this point, A Marvellous Light unfolds in a controlled, leisurely way, but here it accelerates, and we get all the plot, all at once. The men learn of a sinister scheme by a shadowy cabal (Reggie’s murderers, and the source of the runic curse) to locate long-thought-legendary magical objects. Robin and Edwin set out to find these objects before these evil magicians, and protect England from their malevo­lent plans, which tosses the reader into a maelstrom of danger and intrigue, near-death tussles, shifting alliances, and a magician-eating hedge maze. The action, though exciting, becomes harder to follow or care about.

Marske builds a good mystery, but what we want to know about, what keeps the pages turning, is the evolving relationship between Robin and Edwin. The men’s love affair consumes most of the emotional space from the middle of the novel onward. It’s passionate, it’s way hot, and it doesn’t leave much room for anything else.

Will they get together? Will they stay together? Outside the romance genre, it’s rare to see this level of attention and sensuous fervor given to a love affair. Though it reduces the impact of the action, it isn’t disappointing, and, in this reader’s opinion, cushions the ending, which, if I didn’t love Robin and Edwin’s love so much, and, if I didn’t know A Marvellous Light was the first in a series, would have let me down.

In this case, to find that the setting, carefully con­structed to suggest nothing was as it seemed, actually was, indeed, exactly as it seemed, and was way less important than the couple’s triumph. There’s time to get the back to the action. Bask in their happiness.