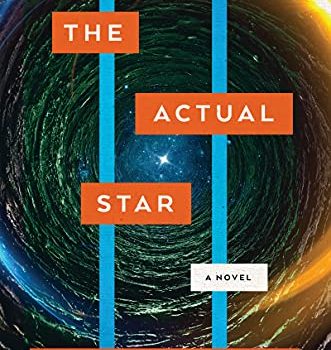 Middle-grade fantasy/mystery novel about a girl who relies on her knife, but needs her wits when magical dolls give her three tasks.

An animal behaviorist, his young chimp who speaks sign language, and enthusiastic undergraduate Aimee end up in an interspecies love triangle.

Historical horror novel about a mysterious presence in 17th-century Connecticut that helps a widowed woman save her farm, opposed by dark spirits, powerful men, and Puritanical attitudes. Includes illustrations by the author.

Byrne reinforces the idea that, despite the tendency for history to be forgotten or become folklore, we always remain connected to our ancestors, even if we are not conscious of it. This sentiment is beautifully rendered in the final quarter of the book, as the three timelines converge in ways both figurative and literal, providing a moving end to a terrific novel.

Magical realism novella told through various documents and accounts of the history of a city’s Black section, a deteriorating community fed on by a demon.

Doyle, Marissa: What Lies Beneath

Young-adult fantasy romance novel. Teen Emma Verlaine is stuck on an island off Cape Cod during WWI in 1917, but finds solace in watching the seals that keep following her, and hanging out with local boy Malcolm.

Grassman, Preston, ed.: Out of the Ruins

YA fantasy novel. Teen vampire girls team up to exact revenge on the ex-boyfriend who turned them all.

Young-adult horror novel. Foster siblings with magic abilities witness something unspeakable, and then start to disappear one by one.

Young-adult high fantasy novel, the first in a series about a kingdom divided by corruption, the prince desperately holding it together, and the girl who will risk everything to bring it crashing down.

SF thriller about Dare to Know, an enigmatic company that has developed the technology to predict anyone’s death down to the second.

Kristoff, Jay: Empire of the Vampire

Dark fantasy/vampire horror novel, the first in the Nevernight Chronicle series about a world where the sun hasn’t risen for decades, and vampires will soon take over — unless Gabriel can find the Holy Grail.

Lem, Stanislaw: The Truth and Other Stories

Urban fantasy novel. 15th in the October Daye series. Toby is scheduled to get married to her long-time suitor, Tybalt, San Francisco’s King of Cats, but plots may interfere.

For every birth, one parent must die. Which parent that will be is chosen by the child when they turn 18.

Whiteley, Aliya: From the Neck Up and Other Stories

Collection of 16 stories, covering subjects like future of farming in a new Ice Age, or the artist bringing life to glass; the many-eyed monsters we carry and the secret cities inside our bodies; the alien invasion through our language to the Chantress and her twists on the fairy tale.

Near-future SF novel of environmental disaster. Khristen’s boarding school in the desertified American West shuts down, and she ends up in a remote hotel inhabited by odd characters.

Fantasy novel/parable of a peasants’ revolt involving fishermen, shopkeepers, lapsed nuns, anarchist bats, and an itinerant camel, while the legend of a coming giant wave threatens the entire city.

In this episode from Brazil, our guests are: Fábio Fernandes is an SFF writer and translator living in São Paulo, Brazil. He’s got several stories published in online venues in the US, the UK, New Zealand, Portugal, Romenia, and Brazil. He also contributed to Steampunk Reloaded, Southern Weirdo: Reconstruction, and The Apex Book of World SF Vol. 2. Co-edited (with Djibril al-Ayad) We See a Different Frontier, an upcoming anthology