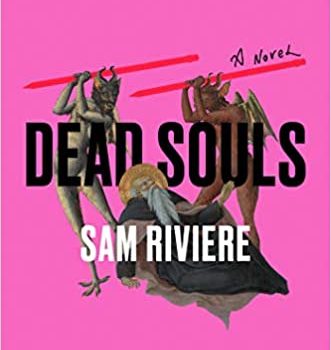 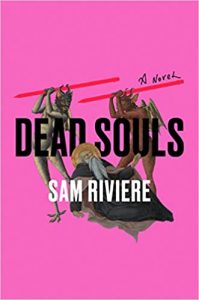 You’d be forgiven for thinking that Sam Riviere loathes poetry. His shaggy dog tale of a second novel, Dead Souls, is, amongst other things, an evisceration of the poetry industrial complex: the poems, their au­thors, and the publishers. Riviere is, of course, famously a poet who runs an independent press (If a Leaf Falls Press) and has published numer­ous collections, including three from Faber & Faber. For all the barbs and deep cuts, Dead Souls is as much a piss-take of Riviere’s career (a decade back, he was viewed as part of a “brat pack” of emerging British poets) as it is a hilarious satire on the controversies that have surrounded “the poetry establishment” over recent years. This includes the schism between spoken word and page poetry and claims that social media has cheapened the craft and created a cult of “personality poets.”

Dead Souls takes place at a literary festival in London, or more precisely a Travelodge bar near Waterloo Bridge where the conference at­tendees have gathered to get royally plastered. It’s there that our unnamed narrator, the editor of a mid-range literary journal, encounters Solo­mon Wiese, a once-acclaimed poet now spurned by London’s literary community. Wiese is the casualty of a publishing industry facing a crisis of originality. As our narrator explains, “belief in the established standards and practices of the industry had begun rapidly to wane,” with literary agents and editors no longer willing “to vouch for their own judgements.” This “fissure of doubt” leads to a series of terrible publishing choices, culminating in two of the larger firms releasing books that they claim to be new but are, in fact, reprints. With the public’s faith “eroded to such a point… that even poetry becomes preferable to them,” the publishing companies (specifically their PR departments) develop a programme, the “quantitative analysis and com­parison system” or QACS, that makes “previous plagiarism detection services resemble child’s play.” This leads us back to Wiese. With poetry now a viable and even popular literary genre, his work – which borrows heavily from other poets – is deemed by QACS to be “unacceptably derivative.” As such, he is “grey-listed” by the literary community. But that’s only the begin­ning of Wiese’s extraordinary story. Throughout the night and a good chunk of the following day, he recounts in meticulous detail how he rebuilt his career as a spoken word poet and how it again all came crashing down. It’s an impos­sibly strange tale involving data pirates, reading sickness, fake accounts on social media, and the cultural wastelands of the English countryside.

Reminiscent of Thomas Bernhard and, more recently, the works of Lucy Ellman and Mike McCormack, Dead Souls is presented as a sin­gle, unbroken paragraph. The long and winding, multi-clause sentences that dominate the narra­tive give it an air of self-importance, reflective of the unnamed narrator’s sardonic attitude to the conference, the attendees, and the industry they all – including the narrator – represent. There’s this particularly mordant section where he discusses the distinction between altruism and performative activism when editors (such as he) publish political poetry by marginalised and oppressed poets:

Everywhere one looked there were ad­vantaged idiots with nothing but the best intentions, in other words the appropria­tors of worthy causes, who whatever their aspirations always ended up controlling the agenda in the most clueless way imaginable, dominating the discussion and transforming it into a dialogue fit only for idiots and poseurs.

This acerbic take on the cultural elite – the pretension, the hypocrisy, the parochialism – extends to Wiese’s outlandish tale. When he takes up residence in his hometown of Diss, where the only outlet for the hoi polloi is to gamble on buggy races “piloted remotely by buggy drivers from pods installed in their home,” he does so in the belief that to revive his career, to make an “emphatic return” he needs to withdraw himself from the cultural influence of London. And Wiese does make that emphatic return, but only by gaming social media and cynically exploiting the work of rural poets whom the capital ignores. Emblematic of this is a very funny section involving the old poet on his deathbed, growing steadily weaker from the villagers’ endless requests for poems (“they had quickly drained him of his powers”). It’s humour, however, laced heavily with bitter tragedy as that very same poet remarks that by living in the “arse end of no-where,” it’s been more than a decade since his last poem was published.

Beyond Riviere’s biting satire of the cultural gatekeepers who commodify and set strict rules on the correct forms of poetry (they appear in the novel almost like wizards from Harry Potter), Dead Souls is brilliantly inventive. Along the way, we meet an eccentric group of individuals, including literary terrorists, an inventor of a device that can make paper from household waste, and my personal favourite: the man with “scabs on his head.” When blended with Riviere’s critique of the literary genre he so clearly loves, we get a novel that can be laugh out loud funny, harsh and savage, but also sobering and thoughtful. 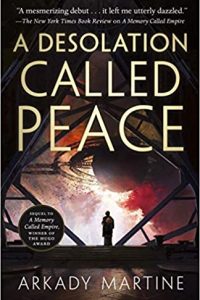