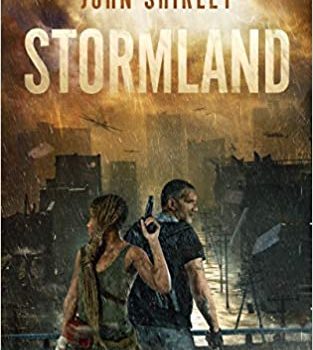 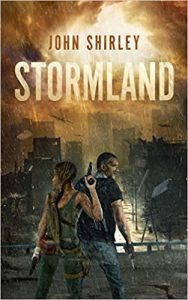 Once upon a time, there were two factions of SF writers: the humanists and the cyberpunks. Their differing narrative stances and methodologies, themes, and angles of attack basically broke down along lines of optimistic/pessimistic; liberal/anarchic; spiritual/nihilistic. Of course there were gradations and overlaps, anomalies and paradoxes among and between the two camps; and surely the whole dichotomy is ridiculously simplistic and reductionist, and often faded away completely when aesthetic decisions assumed prominence. Nonetheless, there was some reality behind such a spectrum, and you can surely see it now if you pick up John Shirley’s gripping, slam-bang new “cli-fi” thriller, Stormland, and compare it to Kim Stanley Robinson’s New York 2140. Both concern flooded, climate-change-wracked cities and the various strata of their inhabitants, from high to low, and their strategies for coping, surviving, and even flourishing. But whereas Robinson’s novel, featuring on its cover a sunny image that looks almost like an amusement park, is centered on rational choices and techno-fixes, Shirley’s book—whose cover is all lurid lemon sky and menacing shadows and gritty desperados—revolves around fatedness, emotionality, and techno-curses. Robinson’s scenario is plugged into larger systems of command and authority; Shirley’s nexus is deracinated, alone, and adrift, a “temporary autonomous zone” unhinged from the larger world outside, save for the incursion of predators.

This distinction is not to maintain that Robinson is blind to the dark side of life, nor that Shirley is immune to nobility. Both men, being excellent artists, paint the whole canvas of existence. But it’s indisputable that their foci and attitudes are radically different.

In the year 2039, perpetual superstorms have ravaged the East Coast of the USA, and turned the formerly lovely tourist city of Charleston SC into the omphalos of “Stormland,” a region full of chancers, refugees, loners, gang members, and the exiled. Into this shattered city comes Darryl Webb, a man who is a cross between a bounty hunter and a PI. He is on the trail of a serial killer named Gerald. Upon dicey arrival, he insinuates himself into the existing relationships binding the citizens of Stormland, and comes upon Gerald early in the storyline. But he discovers that Gerald committed his crimes under a compulsion that is now absent, and has become something of a local selfless savior. How can Webb reconcile his assignment of justice with this new reality?

Simultaneous with this strand of action, we watch the approach to Charleston, in a sophisticated flyer, of the Leuman family: father Noel and son Cory, along with various retainers. The father is a millionaire businessman, mostly avaricious and without scruples, dealing in various bio-products. His son, somewhat unformed and spoiled, is more principled and ethical and sensitive. Elder Leuman has some mysterious illicit doings he has to attend to in Charleston: in and out quickly. But—small early spoiler—their ship crashes and the pair are now stranded in Stormland.

Meanwhile, Webb has discovered that killings similar to those once perpetrated by Gerald are still happening in Charleston. He makes it his new mission to uncover what’s going on. (The disturbing answer lies with two bad apples named Puritan and Garbo, who live in a nice, neat, gated “Arcadia” community elsewhere.) Needless to say, Webb and Gerald’s path will intersect with that of the Leumans, and they will all find themselves acting as reluctant allies and fighting for their lives—against deadly forces both human and meteorological. A lively cast of locals, including two tough standout women, Isa and Juliana, round out the troupe.

Shirley evokes his battered, dangerous city very vividly, rendering the venue into something between Ballard’s The Drowned World and Carpenter’s Escape from New York. You can hear the groaning of the buildings’ girders and the slosh of water and the howl of the winds. There’s an essential cyberpunk filter over it too, as when we encounter a sentence such as, “Near the top of the building a dead electric sign read: GLOBAL INSURANCE,” and its affinity to the famous opening line of Neuromancer.

The characterization of all the major figures is intense, believable, and enticing. Webb is definitely in the mold of the Chandlerian Knight of the Streets, but not in a cliched sense. He has enough vices and doubts to assume flawed tangibility. Shirley also pulls off an amusing kind of Western Movie Bat Masterson/High Noon riff when, for a while, Webb has to literally become Charleston’s “marshal.”

Cory has a great character arc, a classic sequence from spoiled scion to fire-hardened maturity. “Now… he felt confident he was where he belonged. He was in the center of chaos, struggling with it, for [a] reason.” But surely the most curious and winning character is Gerald, whose moral ambiguity and semi-chosen, semi-enforced path of nonviolence provides suspense, grim laughs, and pathos.

The fact that all the events take place on a very limited stage (save for the Puritan/Garbo segments, which are minimal) and yet remains compelling, with one great action sequence after another, is testament to Shirley’s storytelling skills, honed by decades of fine work. And he does not neglect to insert some tender, revelatory moments, too.

Sharing a little of its genetic essence with Cody Goodfellow’s recent Unamerica (isolated venues used as testing grounds by monsters), this swampadelic adventure transmogrifies such realtime disasters as Katrina-flooded New Orleans into the stuff of speculative nightmares. 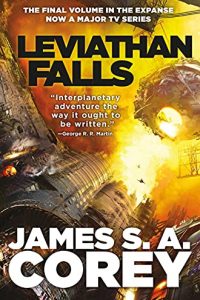