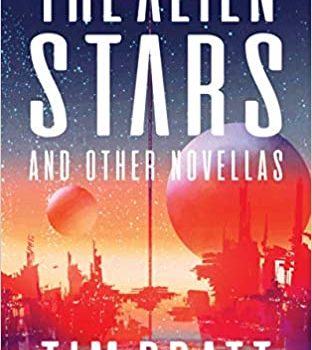 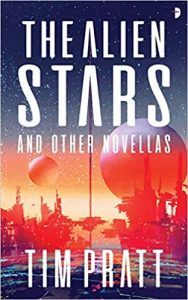 Tim Pratt’s Axiom trilogy (The Wrong Stars, The Dreaming Stars, and The Forbidden Stars) is a trio of excellent, modern, space-opera pulp adventures, with a compelling cast and a satisfying amount of solv­ing problems by blowing them up. I’m gutted that there don’t seem to be any plans for more novel-length works in this setting – and at the same time delighted by the novellas collected in The Alien Stars and Other Novellas, which form a coda of sorts to the trilogy.

The Alien Stars collects three stories: “The Augmented Stars”, “The Artificial Stars”, and the titular “The Alien Stars”. Each involves or focuses on a different character from the original trilogy, and each is told with a slightly different style – though with equal amounts of panache.

“The Augmented Stars” is told from the point of view of engineer Delilah Mears, hired by Ashok, the augmented engineer from the original trilogy (now an artificial intelligence, an engineering rockstar, and captain of his own spaceship), for a mission to investigate an Axiom anomaly and a missing human-crewed vessel in the same area of space. The Axiom anomaly appears to be able to reverse entropy, and when they arrive, Delilah finds herself in the middle of weird shenanigans involving aliens who have taken a human pirate drama show to structure their culture. Light, snappy, with a fast pace and a great sense of humour, “The Augmented Stars” is everything I enjoyed about the original trilogy compressed into a smaller space. It’s not deep, but it’s sure as hell fun.

“The Artificial Stars” is about Shall, an artifi­cial intelligence familiar to readers of the original trilogy. Shall’s original template was based on the then-husband of Callie Machedo (protagonist of The Wrong Stars and its sequels), but he’s long since grown past any jealousy he has for her current wife. Shall is the elected president of the newly reconstituted Trans-Neptunian Al­liance, the only polity in the solar system with full citizenship for AIs. “The Artificial Stars” is recounted in the first person, using the conceit that Shall is creating a record as required by his role as a public person – and it kicks off when he receives a message from a previous instance of himself, one he’d for years believed destroyed. This other Shall, now calling himself Will, warns of a threat to the existence of the universe – a threat he needs the other Shall to help him defeat. But Will has been remade with the aid of Axiom tools, as Shall discovers, and he might pose a threat to Shall’s world himself.

“The Artificial Stars”, while still entertaining, feels a little shallower, a little slighter, than either “The Augmented Stars” or “The Alien Stars”. It’s a straightforward little adventure with some musings on identity, and a bit of banter to give it teeth.

“The Alien Stars” is the standout novella in this collection. It focuses on Lantern, a member of the alien species who call themselves the Free, and it’s told in a quasi-epistolary form. Lantern was part of a sect known as truth-tellers, who alone among the Free always spoke the truth – except that she discovered the higher authorities in the truth-tellers were, in fact, dedicated to the return of the Free’s former masters, the monstrous, genocidal Axiom. Now she has finally found where the highest council of the truth-tellers have fled to, since their plans to wait for the return of the Axiom are in disarray. Alone, with only her wits and a handful of tools, it’s up to Lantern to prevent them from setting themselves up as new masters of the universe, for they have gathered old Axiom technology that would give them a great deal of firepower. Introspective about the power of truth and story, about personal ethics and interpersonal relationships and how hard it is when people who were kind to you turn out to be monsters, “The Alien Stars” is also a compelling, fun, explosive work of space opera pulp. It’s delightful.

As a whole, I suspect The Alien Stars and Other Novellas will mostly appeal to existing fans of Pratt’s Axiom trilogy, but I think it might also work as an introduction to the high-octane pulpish entertainment that characterises that trilogy. It contains a satisfying and entertaining trio of novellas. Personally, I’d love to read more of them. 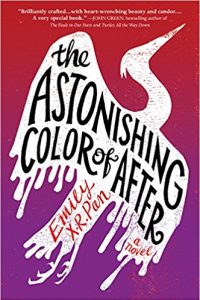 Colleen Mondor Reviews The Astonishing Color of After by Emily X.R. Pan