Authenticity as a lived principle—that is, the choice to become more truly and deeply oneself, whatever the cost—is as necessary as soil and rain. Without it, we wither. We put forth poisoned gourds. But if we speak truth, walk in truth, and cultivate truth, like strawberry plants, around us, we can offer what we’ve grown to others when they come with honest hunger to our door. In this slow way, we change first ourselves, and then the world.

The label authentic, applied to restaurants, luxury goods, and literature, is a different matter. Authentic is heir to the now disreputable exotic, frequenting the same haunts as its predecessor, its racial inflections more carefully concealed. The swap is most obvious in reviews and advertising for nonwhite restaurants. Where, ten years ago, a menu might have been described as exotic, now it is authentic Chinese cuisine, which, translated, means that this restaurant’s food tastes the same as another Chinese restaurant’s, perhaps even the same as Chinese food one has eaten in China itself, a mention of which confers worldliness and authority upon the reviewer. And the impression of authentic is emphasized if the food is prepared and cooked and served by people who look Chinese, even if they are in fact Malaysian, Brazilian, or Japanese.

One spots the term’s trick in its absences. By and large, diners do not wax enthusiastic about authentic American cuisine or authentic Canadian cuisine or authentic Australian cuisine, in the same way that exotic Canadian cuisine sounds paradoxical. This is because we implicitly understand that restaurants serving certain cuisines require a white stamp of approval, a guarantee of uniformity with other experiences of that country’s cuisine, never mind the rich and varied culinary landscapes of millet and cumin lamb in northern China and rice and mouth-numbing chili oil in the south—while others do not. In the twentieth century, in the same way, we knew that kebabs, kofta, noodles, and tamales were exotic, even if they’d been packed as lunch for American schoolchildren for over fifty years, while Lunchables, baloney, and mayonnaise were not. Then and now, this rule was not spoken aloud, but it was no less known for being unsaid.

The desire to use authentic in culinary contexts is understandable. Restaurants want to distinguish themselves. Diners have expectations they wish to be met. Eating the same thing over and over, no matter where you are, can be a comfort. But demanding uniformity, and punishing difference, stifles innovation in cooking as well as art. If we ask ourselves what a creative revolution in authentic Sichuanese cooking looks like, or cutting-edge, boundary-breaking authentic Mexican cuisine, our imaginations fall short. The word that better suits these contexts is traditional, which is used for French and Chinese food alike. Traditional implies a long conversation with others over decades, as well as the egalitarian participation of preparer, server, and diner. Using traditional also makes space for new.

But authentic continues to be used for cooking and handbags, because in addition to implying traditional, it also serves as a stamp for differential value. One can feel superior to others for having a paper certificate that distinguishes one’s Coach or Balenciaga from identical objects made in the same factories without the same certification—or astronomical price. One can photograph and brag about an authentic Ethiopian meal, authentic Louboutins, or an authentic book. The act of eating is the foundational metaphor of consumerism, and the same motivations inform consumer behaviors across industries.

Just as we do not clamor for authentic French fries, we do not ask if a small-town Midwestern Bildungsroman or another novel about a lascivious English professor is authentic; we consider these narratives sufficient and normal as they are. And so we do not subject them to the same suspicion, nor require them to jump through the same hoops, as books about the lived experience of people of color, unless the author of said Bildungsroman is also a person of color. Giovanni’s Room, Baldwin’s 1956 novel about a white American in Europe, was rejected by multiple publishers on the grounds of “inauthenticity.” Reflecting on the book, Baldwin observed: “Whites want Black writers to mostly deliver something as [if] it were an official version of the Black experience.”[1]

When minority readers use authentic, it is often a shorthand to communicate to other minority readers that a book will not be egregiously harmful or inaccurate. When used by the majority, authentic suggests communicable virtue, rather like a medal of Our Lady of the Such-and-Such, purchased at a particular shrine or vending machine: Read this authentic book and you will learn profound and inarguable facts about an exotic culture. Some of the holiness will rub off on you. You will be superior to readers of inauthentic books.

I find this binary stifling. Today a work is deemed authentic or inauthentic, the flaws skipped over in the former case, the good points ignored in the latter. As a writer and reader, I wish for a world with richer, deeper conversations, one where we talk about whether a novel is well-researched or somewhat researched or poorly researched, and what precisely it got right and wrong; whether the tone is earnest and sincere, or cynical and bitter, or forced and market-driven; whether the story tells a truth about what it means to be human.

Does the artist speak truth and walk in the truth? Is the art well executed? Or have corners been cut? Is the writing fresh and alive, and does it illuminate the soul? Or does it smear, blear, smudge, and muddy the mind? Is the work well done? Is the construction sound?

The general problem, of which authentic/inauthentic is a specific manifestation [2], is a growing desire for simple categories and fast judgments in an increasingly complex and exhausting world. We want boxes and rules, because we feel safer with them, and more and more often we feel unsafe. But literature, art, and human life do not fit neatly into boxes or follow set rules.

I want a world in which we can speak of nuance and fine differences, of gradations of quality on multiple axes, in which books are not rated between one and five stars like defective toasters and polyester shower curtains, but tasted and considered, explored and discussed. Amazon not only undercut bookstores through predatory loss-leader pricing, it cheapened literary conversation by encouraging the same form of review for hand sanitizer, one-piece bathing suits, and Shahriar Mandanipour’s Censoring an Iranian Love Story, though only one of these adds meaning and beauty to the world.

Online, the dense, layered experience of reading has been reduced to a five-point rating, while our contribution and responsibility as readers have been elided. Unlike movies, which feed us images, sound effects, visual effects, and actors we’re familiar with, novels require us to stage our own performances, to cast our own roles, to compose and play our own music. The reading of a novel is unique to each person and each text, and indeed often unique to the moment; there are books I loved upon first reading and not thereafter, and books for which the opposite happened. Reading is also, in the end, an experience that can only be imperfectly communicated to others.

But when another person, bringing different life experiences to a book, has heard the same indescribable music and come away rapt by the same beauty, we have, like Milton’s angels, briefly and impossibly shared the same point in space. I think it no coincidence that some of my oldest friendships involve the exchange of beloved books. Through conversations on literature, we are able to compare private experiences of what is invisible, unheard, and intangible, and yet, at its best, transformative. It is a miracle and mercy to speak about our souls’ encounter with art of any kind, and to be heard. May we do so richly and thoughtfully.

[2] A related but separate problem, not discussed here, is a lack of equity in the publishing industry. 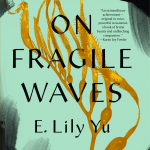 E. Lily Yu received the Artist Trust LaSalle Storyteller Award in 2017 and the Astounding Award for Best New Writer in 2012. Her stories appear in venues from McSweeney’s to Tor.com and in 12 best-of-the-year anthologies, and have been finalists for the Hugo, Nebula, Locus, Sturgeon, and World Fantasy Awards. On Fragile Waves is her first novel.