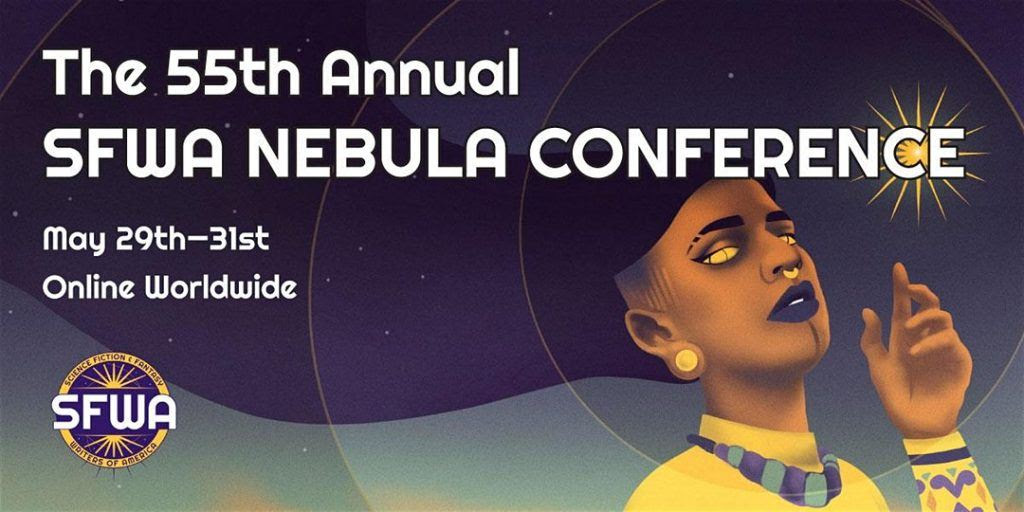 The 2020 SFWA Nebula Conference morphed mid-COVID from an in-person conference into an impressive online event, held May 29-31, 2020. There were 808 members from 33 countries, a record, up from 2019’s record-breaking 475 registered members.

The 55th Annual Nebula Awards Ceremony was held Saturday, May 30 at 5:00 p.m., streamed live on YouTube, Facebook, Oculus, and the Nebula Conference website, to more than 2,500 viewers.

SFWA president Mary Robinette Kowal opened the ceremony with an address about SFWA’s relationship with current events and introduced toastmaster Aydrea Walden, writer for the series Yin Yang Yo! and creator and star of Webby-nominated series Black Girl in a Big Dress.

Sam Weller, the authorized biographer for Ray Bradbury, presented the Ray Bradbury Award to Good Omens: “Hard Times”. Neil Gaiman accepted, saying, “I didn’t intend to write a television adaptation of Good Omens. I did it because, as he knew his own immeasurable light was dimming, Terry Pratchett wrote to me, telling me that I had to do it. That no one else had the passion for the old girl that the two of us had, and I was the one of us who had to make it happen, so that he could see it before the lights went out.” Gaiman credited the teams involved, and especially the cast and crew. He finished by saying, “It feels almost indecent to be accepting an award while so many people are hurting. But thank you, from me, and from Douglas who took the words and made them so brilliantly come to life. This is for Terry Pratchett.”

Sarah Pinsker presented the Kevin O’Donnell, Jr. Service to SFWA Award to Julia Rios, who established and oversaw the SFWA Mentoring Initiative and “gave hours and days and weeks of her life to this program.” Rios said, “All of the work I’ve done with this has been about building community.” She thanked Cat Rambo, Nisi Shawl, Elizabeth Bear, John Chu, and others who helped with the program in various ways.

Rebecca Roanhorse presented the finalists for the Short Story Award, which went to A.T. Greenblatt’s “Give the Family My Love”. Tearful, Greenblatt thanked Neil Clarke and Kate Baker, her critique group, friends, family “who don’t mind that I disappear for hours on the weekend to write,” and readers. Greenblatt said, “Being human means we’re complicated creatures, with complicated emotions, and opposable thumbs – which means we can hold both our fears and dread in one hand, and our hopes in the other. And I hope you hold tight to that hope, that desire to make good art, and to make the world a little bit better.”

The Damon Knight Grand Master Award was presented to Lois McMaster Bujold by lifelong friend Lillian Stewart Carl, who said, “I’d never known anyone who not only read as voraciously as I did, but who was similarly driven to write… she introduced me to science fiction and fantasy: Mind! Blown!” Bujold said that receiving the award was “enormously gratifying” and spoke briefly on the nature of awards. She thanked Kowal and the SFWA committee, friends, and people who helped along the way such as Betsy Mitchell, Jim Baen, Toni Weisskopf, her agent Eleanor Wood, and others.

Greg Bear presented the nominees for the Novelette Award; the winner was Carpe Glitter by Cat Rambo. Tearful, Rambo said, “This award, given by my peers, is incredibly meaningful to me.” She thanked publisher Tricia Reeks, spouse Wayne Rambo, her mother and grandmother, friends, family, and fans.

George R.R. Martin presented the first of two Solstice Awards to artist and organizer John Picacio, describing him as “one of our field’s most preeminent artists and illustrators,” and praising him for founding the Mexicanx Initiative. Picacio thanked Martin, SFWA, Mike Libby who created the actual award, and Kowal. He talked about being a 2018 Worldcon GoH and said, “There are precious few Mexicanx creators and far too few Mexicanx stories within SFF’s wider visibility. We needed more of them and we needed them now.” He spoke about people who helped make the project happen and ended with guidelines for successfully replicating what he’d done.

The second Solstice Award went to David Gaughran, presented by Jeffe Kennedy, who introduced him as “a paragon of the self-publishing community and champion for good.” Kennedy talked about the advantages and perils of self- and indie- publishing, saying, “Gaughran has dedicated himself to… offering aid and information in this wilderness.” Gaughran congratulated Picacio and thanked SFWA, saying the support was “deeply humbling.” He thanked Victoria Strauss, Ann Crispin, and Writer Beware’s volunteers. He said, “Readers need our stories now more than ever, and we need to keep giving them to them, but we also must remember to reach back and help the next generation to tell theirs.”

Gaughran’s speech was followed by the In Memoriam.

LeVar Burton presented the Andre Norton Award finalists; the winner was Riverland by Fran Wilde. Wilde began by calling for people to be safe “while everyone is out fighting.” She talked about the book being about “figuring your way out of or through a bad situation.” She thanked the people who helped her through, and said, “For many of us, surviving a violent situation doesn’t always look like you think it might. We have a shorthand for how domestic violence is portrayed in the media, and that shorthand allows people to cover up the cracks, whether on purpose, or to try to keep things from getting worse, and Riverland is about that, about making things look perfect because you can’t think of anything else to do, and how to stop that cycle.” She thanked Tom and her family, her writing community, readers, the people at Abrams, friends and colleagues, other nominees, and more.

Kowal introduced prior SFWA president Cat Rambo, saying, “She is the reason that SFWA was able to do this pivot, because she put the organization on sound financial footing.” Rambo talked about SFWA’s original goals and the way the organization has developed, saying “We must continue to look out for each other…. It is difficult to feel like we matter, but we do…. We write the stories that ensure that everyone, regardless of identity and privilege, see themselves as heroes and know that they matter.” She thanked the staff and volunteers, the members, and Kowal and the board. A compilation video of appreciations of Rambo followed. Sarah Gailey presented the finalists for Best Novella Nebula, which went to Amal El-Mohtar & Max Gladstone’s This Is How You Lose the Time War. Exuberant, El-Mohtar & Gladstone thanked their families, agent DongWon Song “for loving our book despite hating both epistolary format novels and time travel,” editor Navah Wolfe, and the teams at Saga Press and Jo Fletcher books. “We wrote this book sitting across desks from one another, imagining Red and Blue apart. And now we’re accepting this award with a lot of both time and space between us, but also at the same moment, and on the same screen.” They thanked “everyone involved in making this year’s Nebulas stellar.”

Whitney Beltrán presented the award finalists for Game Writing; the winner was The Outer Worlds by Leonard Boyarsky, Megan Starks, Kate Dollarhyde & Chris L’Etoile. Patel, Kirsch, Boyarsky, and Dollarhyde accepted, thanking colleagues, nominees, SFWA, and family. Patel said, “It’s an honor to be recognized alongside so many fantastic writers.” Boyarsky called it a “great honor” and thanked co-director Tim Cain. Dollarhyde called out for support of the Black Lives Matter protests and thanked “every player who loved Parvati; those who saw themselves in her, my work is for you.” She thanked L’Etoile, the original writer for Parvati, and the other finalists.

Walden introduced special guest ambassador Carol Moseley Braun, “a lawyer, an ambassador, and the first African American woman in history to be elected to the United States senate… she is also a science fiction and fantasy fan.” Braun said, “Science fiction and fantasy have the power to transport us to new worlds, then return us to our own, transformed by what we have experienced on the page. A new perspective opens our minds to possibilities of what this world can be, and that is the first step in creating real change…. Particularly as we are confronted with building a new world in the aftermath of the current pandemic, your voices in favor of a more peaceful world, one more connected to nature and the rest of humanity, matter more than ever….”

The finalists for Best Novel were presented by Charlie Jane Anders, with the award going to A Song for a New Day by Sarah Pinsker. Breathless, Pinsker said, “How do you write an awards speech when everything is on fire?” She thanked wife Zu for “boundless support and patience,” agent Kim-Mei Kirtland, editor Rebecca Brewer, the Berkley team, Asimov’s editor Sheila Williams for publishing “Our Lady of the Open Road”, “since this story couldn’t have existed without that one,” family, friends, beta readers, and more. She said, “We’re all scared and stressed and hurting and looking for new ways to connect…. A Song for a New Day is a book about those connections. It’s about community and belonging and supporting the people who make art….” She spoke about “radical acts” and ways to participate in and support the Black Lives Matter movement as well as engage with discussions around COVID-19. “We aren’t living in my book and we still have time to change. Wherever you live, do what you can, however you can…. Please make my book fiction again.”

For recorded video of the major program items, including the Nebulas Ceremony, see <SFWA.org>. Next year’s conference planning remains in flux, as the situation continues to evolve. In 2021, there will at least be a virtual event, and probably a hybrid conference mixing in-person and online components, and SFWA has announced it will have continuous year-round programming available going forward.

This report and more like it in the July 2020 issue of Locus. 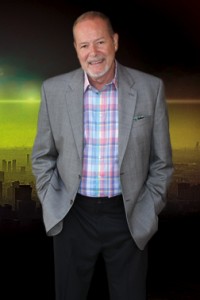 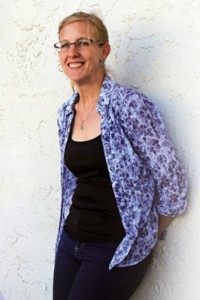