Last year, I read the same passage from my book, Creatures of Want and Ruin, for four different events: the Fantastic Fiction Reading Series at KGB Bar in New York City, at NecronomiCon Providence, at Noir at the Bar in Denver, and finally at Writers with Drinks in San Francisco. Given the reception to the readings, I can say with confidence that my performance improved every time—but it wasn’t due to that old adage of practice making perfect. Like many writers, I verbally self-edit when I read. As I listened to myself during practice readings and live events—the way I’d skip over certain bits, make excuses for unnecessary references to the book beyond, and so on and so forth—I became more willing to edit it on the page. With my pen, I mean, on the actual page. Just by listening to myself I pared down the reading significantly, and the result was a leaner passage; one with a storyteller’s clarity to it.

The final result was not just a better quality selection for reading, but a material improvement of the passage itself. Boy, how irritating! After all, this was a published book I was marking up—one to which I had done multiple, heavy edits, and which had been subjected to all the standard editorial processes by my publishing team. And not only that, the bit I’d marked up occurs at the end of Part One, which means, as a recursive writer, I’d edited it more than many of the later parts of the novel. 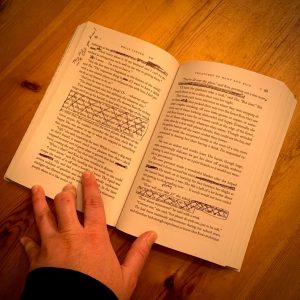 After my last, most aggressively edited, and most successful reading, I looked upon what I’d done with an eye to the future. The cadence of the passage had improved, as did the flow, thanks to those little abbreviations we make in speech but don’t always account for when composing or editing. I decided in that moment that the read-aloud editing had been so undeniably successful when it came to shaving away awkwardness that I would do it for everything I wrote from now on. I would get my ears involved in the matter. And there was no better place to start than with the third and final book in my Diabolist’s Library series, Creatures of Charm and Hunger. I vowed that when my copy edit for the sequel came in, I was going to read the entire thing aloud before submitting the final draft.

I know that “read your work aloud” is the sort of advice dutifully doled out in listicles for beginning writers, along with “kill your darlings,” and “stick to the active voice.” I was no stranger to reading my work aloud—I do it often with dialogue, to catch anything that sounds unnatural, and to untangle difficult passages in my early drafts. But I’d never read an entire novel aloud. I mean, most of my books weigh in at about 100k words, so it was a daunting vow to honor when the time came.

But honor it I did. It was such an intense experience! My goal going in was to do the thing right. To duplicate the success I’d had with my readings, I needed to duplicate the conditions. I did this by setting the intention of reading close to the pace I might while in front of an audience instead of just speeding through, which ended up being more difficult than I expected. I’d start an editing session strong, but after an hour or two, I’d catch myself muttering quickly instead of articulating every word and taking my time, like I would at an event. As penance, I’d make myself go back and start the paragraph over again—or more, if I sensed I’d been slipping for a while. The sustained effort was different than anything I’ve ever done before, editing-wise. Reading a short story aloud is one thing—they require but a single sitting. The novel took many days of afternoon and evening sessions, with occasional morning sessions thrown in there too. I don’t know how to describe it, except to call it an intimate experience, even if that sounds odd as I obviously wrote the book in the first place.

I cut at least 4k from the book during that final edit. I say “at least” because that’s just what the final wordcount reflected; I know I was appending as well as excising words. So did it work? I certainly think the book is better for it, and my delightful (and patient) copy editor said that what I’d done had improved the manuscript, which I was pleased to hear.

Would I do it again? I made a vow, didn’t I? But for my next novel, I will do it during my final round of line edits before the manuscript goes to the copy desk. That way, I’ll have had the read-through as a self-check, and my copy editor will lay fresh eyes on the leanest possible draft, and not be so taxed….

I don’t need to offer a defense of “lean” prose here, but I will say what I mean isn’t that writers must strive to create spare, or minimalist works. My enthusiasm for the novels of the 18th or 19th century means I love a sentence with a clever twist; a sly, wordy, enigmatic turn. But I also believe that conveying meaning—for whatever value of meaning—is the primary goal of the writer. A lean sentence, paragraph, and indeed a lean work stands a better chance of that than one hopelessly cluttered. After all, an artfully arranged baroque parlor can be beautiful and effective without a shred of concession to restraint, but an untidy, bestrewn sukiya-zukuri cannot truly be called minimalist. By reading every sentence of Creatures of Charm and Hunger aloud, I found it easier to locate that middle path between too much information and too little; too many indulgences and too few. This isn’t a surprising conclusion by any means; why else would “read your work aloud!” be on all those 101 listicles? And yet, as the five-year anniversary of my first novel approaches, and my fifth novel is about to emerge into the world, I’d only tried it this once on anything so long, or so complex as a book. Given what a taxing experience the read-aloud edit turned out to be—I’m lucky to live with only a cat, who can’t complain about the sound of me wittering on for days at a time!—I’d love to say it didn’t yield such good results. But it did, and thus I must continue on with it as I continue to write. No one ever said being a novelist would be easy. Then again, nobody ever said editing a book would make a novelist hoarse—which it did! So perhaps I can’t be blamed for never trying it until now.

(The sore throat was worth it.) 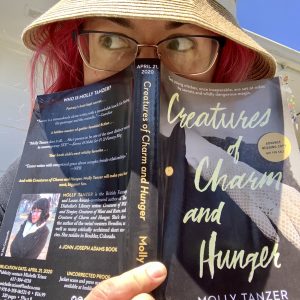 Molly Tanzer is the author of the Diabolist’s Library trilogy: Creatures of Will and Temper, the Locus Award-nominated Creatures of Want and Ruin, and Creatures of Charm and Hunger. She is also the author of the weird western Vermilion, an io9 and NPR “Best Book” of 2015, and the British Fantasy Award-nominated collection, A Pretty Mouth, as well as many critically acclaimed short stories. Follow her adventures at @molly_tanzer on Instagram or @molly_the_tanz on Twitter. She lives outside of Boulder, CO with her cat, Toad.