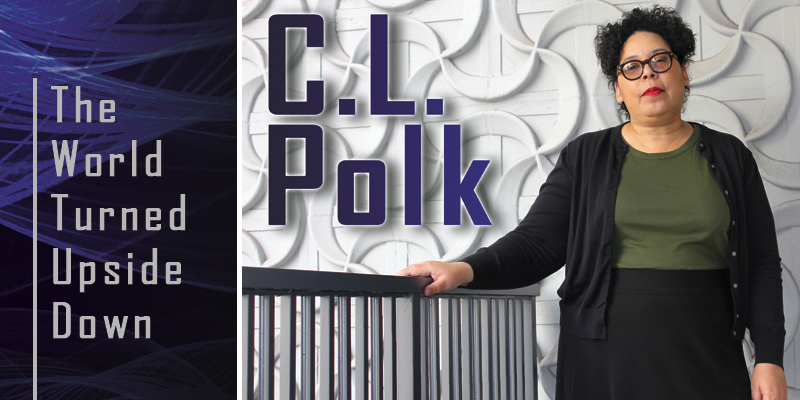 Chelsea Louise Polk was born September 28, 1969 in New Westminster, British Columbia. She spent her childhood there and in Surrey BC before moving to Ed­monton at age 13 and then to Calgary at 21.

She published a few pieces of short fiction beginning in the early 2000s as Chel­sea Polk. Her most recent story is “St. Valentine, St. Abigail, St. Brigid” at Tor.com (2/5/20). Polk’s debut novel Witchmark (2018) was nominated for Aurora, Lambda, and Nebula Awards, and won a World Fantasy Award. It begins the Kingston Cycle, which continues with Stormsong (2019) and forthcoming third volume Soulstar. Fantasy The Midnight Bargain will be published this fall.

“The oil boom in the ’80s brought my family to Alberta. My dad was following the money, so he made us move from Vancouver to Edmonton, which is the land of the really long winter. It doesn’t really get cold in Vancouver. I didn’t really like it – I wanted to stay in Vancouver, but it got extremely expensive there. I felt like every single kid in a YA novel who is forced to move away from their friends to some other town – deeply resentful.

“My mom was a huge reader. My dad, not so much. He was all about making up stories, funny songs, and jokes, and my mom was the serious reader. My most vivid memories of her are her lying on the couch with a book tented against her knees, reading, on the weekends when she was home from her two jobs. I would be in the loveseat because I was smaller, in exactly the same position across the room from her, also reading, like a little mirror. I read a lot of books when I was young, and I learned to read early. I read just about everything I could get my hands on: children’s books, and sci­ence textbooks about the anatomy of plants and bodies, and what seasons are, and how snow is made – I really loved those books.

“My mom is a huge horror reader. She was the one who turned me on to Stephen King and brought me Peter Straub books. She was like, ‘Here’s Ghost Story, you have to read this’ when I was 14. I went into a total Stephen King phase where I read everything he’d written up to that point, completely without judgment or prejudice. I even loved the one about the haunted car, and he says he doesn’t really like that story – I was like, ‘You’re wrong!’

“I did a lot of writing in school. Every week in language arts there was a writing assignment where we would have to take whatever it was that we were studying and literally write fanfic about it, though nobody told us that was what we were doing at the time. I remember writing one that was supposed to be a psychiatric report for the guy who did all the murder in Poe’s ‘The Tell-Tale Heart’, and my teachers always said, ‘You’re so good at this – you should be a writer when you grow up.’ I was like, ‘Yeah, yeah, whatever.’ I wanted to be an astronaut. It was the ’70s, but I had no idea they’d quit going to the moon – nobody told me. Then I discovered I had no hand-eye coordination, I was myopic, and I didn’t like the athletic requirements it took to become an astronaut. After that I didn’t know – I wanted to be a fashion designer for a while, then an architect, an artist, a music producer, and it went on like that. Writing was this thing I didn’t take seriously until I was about 30. I was critiquing someone else’s story, and I could see what they were trying to do, but I really wanted to correct the mechanics of the prose – to go in and say, ‘Don’t put a comma here, maybe don’t use this word, use a different word instead, don’t say “exclaimed” and then “postulated” and then “supposed,” just use “said,” “said” is fine.’ I was so worked up about it, but I couldn’t say all those things because it would be incredibly mean, so I complained to a friend about it. I said, ‘I don’t know what to say, because I see all these things wrong.’ They said, ‘Well, if you think you’re so great at it, why don’t you do it yourself?’ Fine, I will!

“I sat down and came up with a ridiculous story off the top of my head, and then I joined the On­line Writing Workshop for science fiction and fantasy. Del Rey was running the workshop at the time, and it included a bunch of people who have since gone on to be published. I tried writ­ing a novel, but that didn’t work, so I tried writ­ing some short stories, and that worked a little bit better. I started having big problems with anxiety, like, big problems with anxiety, and real­ized I was either going to be a nervous wreck, or I was going to have to quit writing, because I was so emotionally tangled up in the results of what I wrote and the way other people would receive it. I desperately wanted people to like what I was doing, but more than that, I wanted them to think it was perfect. Nobody ever did, because it never ever is. I was thinking, ‘Why can’t I get this right?’, and everybody else said, ‘You’re doing marvelously.’ Nooo, I was doing terribly. I quit writing in about 2006 and went into therapy for years, and in 2014 I literally woke up one morning and thought, ‘I want to write something.’

“I sold my very first sto­ry to Gothic.net, which is long gone now, and then I sold stories to Abyss & Apex and Ideo­mancer and Fortean Bureau. In 2003, I had a ticket to go to World­con in Toronto, but I didn’t have any spending money. Jer­emiah Tolbert said, ‘Sell me a story for Fortean Bureau – there’s at least 60 bucks in your pocket, and we’ll mooch you some lunch when you get here.’ I was literally sitting on the plane writing a short story for Jeremy so he could give me $60 so I could eat at Worldcon. That’s how I sold that story. The last story I sold was ‘Kether Station’ to Baen’s Universe. That was weird, because I had written this story and I didn’t think they’d take it, but they’d opened up their submission guide­lines, and they were the highest-paying market in the game at that point. Whatever, the moon, I’ll shoot for it. They’re not going to take it, but I’ll send it to them anyway. Eric Flint, who was edit­ing at the time, said, ‘I really like this, but I need you to rewrite it.’ I said, ‘Okay, how?’ He told me what he wanted, but I had absolutely no idea how to do what he was telling me. I just couldn’t get from here to there, so I didn’t do anything. I didn’t rewrite it – I didn’t even try. I decided to quit writing because it was way too stressful for me, and I got a letter from Mike Resnick saying, ‘You know what, this is obviously chapter one of a much longer story, and I see what Eric was trying to say to you, but to hell with it. I want to buy it, so will you sell it to me?’ I said, ‘Sure!’ That was the last short story I sold. I had other stories I’d sent out to just a couple of markets, but at that point the anxiety crisis had built up so much that I didn’t try to continue. They’re still sitting in my trunk, untouched, to this day.

“In 2014 I started writing fan fiction on Ar­chive of Our Own, just for the fun of it. I had absolutely no idea what I was doing. I didn’t know what novel structure was, I didn’t know how to contain my plot, and I just wrote every day until I got to the point where I thought, ‘This is too long – I have to end it.’ Doing that totally tricked the anxiety, because it was just fanfic, and I had all these people who were delivering nothing but praise. I never got anybody saying, ‘You missed a comma,’ or ‘This character isn’t acting in character,’ or anything like that – it was all, ‘This is great, I can really feel the music.’

“That environment encouraged me to write more. Then I got the idea for Witchmark, and started writing it around August of 2014. I wrote it, then remembered the old advice that says, ‘Put it in a drawer and forget about it for six months,’ so I did that. I chucked it in a drawer after I finished it, wrote another fanfic and con­tinued to have fun. I was also reading books on writing, things about three-act story structure, the circle of story, nine-box structure, and all this other stuff. I basically rifled the pockets of every craft book I could get my hands on and figured out what applied to me, and then I went back and fixed the novel.

“Because I had started writing on the Del Rey Online Writing Workshop, one of the things they taught us was write it, store it, revise it, and sell it. We talked about Connie Willis’s idea that you just had to get a mass of stories circulating around all of the markets, so the editors would get to know you and what you were trying to do, and they would watch you improve story after story – and then you would hit a point where all of a sudden everything starts selling. I believed in that approach, so I just sent out Witchmark. It never occurred to me that I had to do a lot of research on agents. I just decided to send the book out and see what happened.”

Read the full interview in the May 2020 issue of Locus. 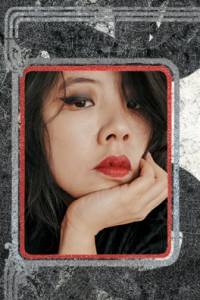 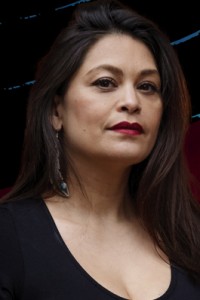