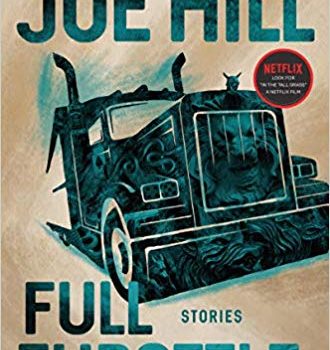 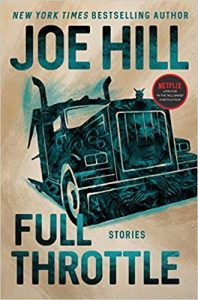 Joe Hill’s first collection 20th Century Ghosts – which this reviewer read, reviewed, and then interviewed the author while having no idea he was the son of Stephen King – was full of fresh, genre-bending work. It was a thrill to discover an unknown author with such talent and promise. Of course, Hill went on from there and everyone now knows him as the heir apparent to his pater’s commercial horror throne. He is now a far more confident writer, but we seldom find the dark sparkle of those 20th Century Ghosts stories like “Pop Art” or “Best New Horror”. Hill often seems to write without the authorial care he did as an unknown. Admittedly, the flaws may not matter to many readers: Hill’s strong characterization and smooth writing skills may negate the imperfec­tions. For those looking for entertainment and willing to withhold deep thought, Hill’s stories will more than suffice. Bestsellerdom is, no doubt, assured. Small and/or large-screen development for some of the content is sure to follow.

Like most successful novelists, Hill seldom simply writes stories for the sake of writing stories these days. Of the 11 reprints, three stories were written to honor deceased writers; one is inspired by a work of art. Three more stories were writ­ten for anthologies with themes of dark fantasy, zombies, and scary air travel. One first appeared as an audio story on vinyl. Imposed parameters can inspire, but they can also confine.

There are two originals (and a rather-nice bonus, unlisted short parable included in the author bio). The best story in the collection is an original, “Late Returns”, in which an unemployed trucker winds up driving a small-town bookmobile. His patrons include those suffering from “the incon­venience of being dead.” Hill’s typical blend of nostalgia and cynicism combine in “Late Returns” for an empathetic consideration of dealing with grief. Well-developed characters, both living and dead, also serve this lovely paean to librarians very well.

The other original, “Mums”, might have been a better story if the author had not emphasized the over-the-top paranormal element that leads the young protagonist to commit multiple murders. The possibility that it is only his mind at work is part of the story, but a subtler supernatural empha­sis would have made it stronger.

Similarly, “In the Tall Grass” – co-written with King – does a good job of building suspense and evoking fear until it enters an overlong woo-woo explanation that “goes for the gross.” “All I Care About You”, an attempt at SF, fails due to a remarkable lack of logical worldbuilding. “Wolverton Station” would have been a stand-out werewolf story (a rare beastie), except there’s no explanation why an overabundance of wolves would not have been noticed even in middle-of-nowhere England.