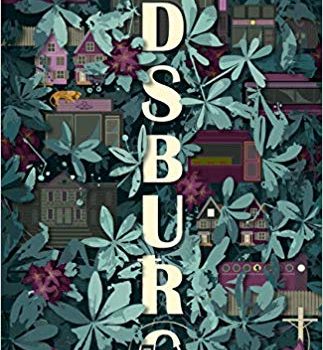 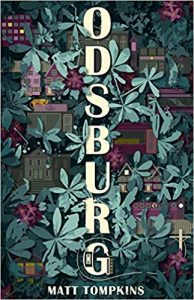 I hadn’t intended to review Odsburg by Matt Tompkins. The book I had lined up was False Bingo, a new short-story collection by Jac Jemc (who wrote a terrific haunted house novel, The Grip of It, back in 2014). Unfortunately, while False Bingo is an excellent book, it has zero genre content and therefore is not really suitable for Locus. So I picked up Odsburg instead, and I am happy I did, because this short novel about a very strange town in Washington State has left a lasting, positive impression.

The story of Odsburg is told to us through the recordings, clippings, and other marginalia com­piled by Wallace Jenkins-Ross, a self-professed socio-anthropo-lingui-lore-ologist (say that quickly seven times). It’s a scientific discipline of his own devising, which, as he sadly notes has not gained “much traction outside of my own studies, a failing that I can only attribute to a powerful academic hegemony and steadfast adherence to the status quo.” As a socio-anthropo-lingui-lore-ologist, Jenkins-Ross collects stories “from ordinary, everyday people, just like you… [and col­lects] publications, artifacts, and ephemera that tell stories.” He achieves this by embedding himself in the place he is exploring, moving among the populace almost invisibly, talking to those willing to chat, but otherwise observing and overhearing conversations. Odsburg is his first case-study, a town founded by Josiah and Jeremiah Ods in 1854 on the northern bank of the Sillagumquit River and known for its atypical “high rates of abnor­mal behavior and extraordinary phenomena.” As we progress through the vignettes, short stories, candy wrappers, leaflets, and letters that make up Jenkins-Ross’s study, a picture emerges of a town in thrall to a pharmaceutical company, the devious and secretive OdsWellMore.

Odsburg joins a fine fraternity of fictional places like Castle Rock, Twin Peaks, Night Vale, and Royston Vasey, where the weird has become commonplace. Odsburg is nowhere near as violent or foreboding as those settings, though each story – even the ones played more for laughs – sug­gest a darker, disquieting reality. For example, a resident provides Jenkins-Ross with an account of the mountain lions that have made his base­ment their home. On the surface, it’s a gentle, humorous piece that pokes fun at government bureaucracy and animal rights activists (neither of whom will assist in getting rid of the lions). And yet the man, “with matted hair, dark circles under his eyes, and several days chin stubble,” is clearly having a nervous breakdown, unable to protect his family, aware that the basement door currently keeping the lions at bay won’t hold them back indefinitely. Then there’s Deputy Hawkins’s reminiscence about his Dad who, one afternoon, when the deputy was 12, evaporated into water and became “part of the Odsburg Municipal Sanitary Water System.” It’s a touching, beautiful piece of writing, principally when Hawkins recalls the time his father was a cloud:

I couldn’t think of how to say hi to him or how to let him know I saw him. He was so high up and I was all the way down on the ground. I got so sad I started crying, which turned out to be pretty perfect actually. My tears evaporated and rose up to join him in the sky.

The entire book is like this, full of strange and inventive ideas – the man who only sees flames after laser eye surgery; the couple who can’t stopeating and begin feasting on their clothes, the furniture, the walls of the house; the man whose skin is slowly receding up his body – that have this tendency to punch you in the gut, leaving you emotionally exhausted (in a good way).

The less than ethical practices of OdsWellMore play a pivotal role in a number of these stories: the residents are virtually a petri dish for the experimental drugs the company cooks up. I was less interested in the overt evil of OdsWellMore and more in the insidious actions of the man behind the study, Wallace Jenkins-Ross. He is initially portrayed as a harmless figure of fun, a bumbling but conscientious observer of humanity. However, his method of overtly and surreptitiously invading other people’s privacy, catching them at their most vulnerable, reminded me of the debate surrounding podcasts like Serial, Missing Richard Simmons, and S-Town, which tell fascinating, gripping stories, but sometimes at the cost of their subjects. Jenkins-Ross’s convoluted justifications for eavesdropping and recording private conver­sations without consent are meant to be funny but also a little creepy. Ultimately we’re not sure what to make of the socio-anthropo-lingui-lore-ologist, whether he’s a man who truly believes in his work, or whether he’s a voyeur getting his kicks out of the discomfort of others. Maybe it’s both, or maybe – just like so many of the people he interviews – Jenkins-Ross is a tragic figure, a lonely person who can only connect with others by making up his own field of study.

The collection of data points and fragments, recorded interviews and diatribes, leaflets, menus, and school projects that makes up Odsburg pres­ent a portrait of a town – for all its bizarre and impossible phenomena – dealing with the same is­sues that many communities face: addiction, lone­liness, and the dominance of corporate interests over the welfare of the individual. With Odsburg, Matt Tompkins achieves the near-impossible by creating a world that is bonkers and absurd but feels utterly real. 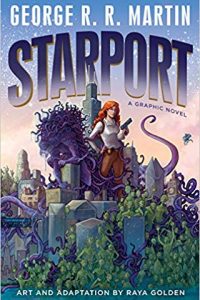