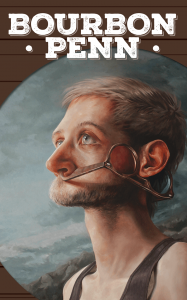 The September-October F&SF is notable for stories by some prominent writers. Maureen McHugh‘s “Under the Hill” is a very well-done, second person point-of-view story about Amelia, who matriculates at Burkman College, a prestigious institution that we quickly learn has an unusual student body – a significant subset are Fair Folk. The arc is simple – Amelia has normal issues adjusting to college and, despite warnings, is attracted to a Matthew Goodman, one of the Fair Folk. It is, really, just a perfectly simple story that does what it does and then leaves. And I liked it.

“The White Cat’s Divorce” by Kelly Link reads like a fairytale retelling, though I’m not sure which fairy tale (though there’s a hint of “Puss in Boots”, perhaps). First published in the catalog for the Weatherspoon Art Museum’s 2018 exhibit “Dread & Delight: Fairy Tales in an Anxious World”, it’s good satirical fun. A rich man decides to put his sons through trials to determine which will be his heir. As usual, the youngest son is the protagonist, and we see him go through his three trials – though mostly he spends his time at a strange house where he ends up in a snowstorm, which is occupied by intelligent cats. A particular white cat befriends him (and more, perhaps), and the young man stays with her until he must return to his father. Naturally, the rich man betrays his sons each time, setting another task. The white cat, of course, is the fulcrum of the eventual resolution of that problem…. This is smart stuff, very funny when it wants to be, appropriately dark when it wants to be.

Elizabeth Bear‘s “Erase, Erase, Erase” is not any sort of fairy (or Faerie) tale. It’s a tense piece in which the narrator is (as I read it) erasing her past – and so doing, erasing herself – a finger here, a nose there, her clothes falling off because her body disappears. The reasons for this become clear – I’ll let the story reveal those – but things turn on her realization that she can’t erase herself, for the sake of more people than just herself. There’s a thriller aspect to the story, which is satisfying, and the character aspect, with the narrator restoring herself, in a sense, is also satisfying.

In the July-August Uncanny, a particularly strong issue, Sarah Pinsker‘s “The Blur in the Corner of Your Eye” is effective SF/horror, about Zanna, a successful mystery writer, who is blocked on her latest book and thus is booked by her lifelong friend Shar (“Best Assistant Ever”) into a remote cabin where she can finish the book without distractions. It seems like a classic horror setup, and when, on her first morning, the power goes out and she has to venture into the basement, we think we know what’s up – but it’s not quite what we expect, because Zanna heads to her landlord’s place to get a fuse and finds him dead. As she waits for the police and Shar to show up, you might be expected to think about Murder, She Wrote – but things get weirder still, and then Shar tells her a really strange story. The ending is scary – and delivered with a hint of ambiguity that makes things even scarier. (And, yes, it reminded me of my favorite viewer theory about all those murders in Cabot Cove!)

Three other stories this issue stand out. In “Big Box“, Greg van Eekhout reimagines the traditional mysterious Magic Shoppe as a big box magic outlet – and is both funny and pointed about the sort of magic available, and its cost. Maurice Broaddus offers “The Migration Suite: A Study in C Sharp Minor“, in which he reimagines the African diaspora, from migra­tions in ancient Africa to the forced migration of slaves to America, to the escape to the North followed by the post-Civil War moves to North­ern cities, extending even to the Moon and the stars. Powerful details highlight each stage, and the eventual message is affecting and honest. The second reprint this issue is fair game for the column because “A Champion of Nigh-Space” was originally posted in 2019 on Tim Pratt‘s Patreon page. Glenn’s girlfriend, Vivy, is really cool, and the sex is fantastic (and kinky), but there are some strange things – the ghost of her that appears once, the time she went away for a weekend and came back somewhat trimmer and with much longer hair, her reluctance to meet his mother. The kicker comes when she summons him to a wrecked spaceship in a vacuum! That is a sort of cheap blurbish way to describe the story, but an SF reader will see where this is going pretty quick, and that’s not the point: it’s a sweet story (Pratt does sweet romance pretty nicely) with some SF coolness points too. Fun stuff.

I wasn’t thrilled by any of the pieces in the July-August Interzone, but there is some nice work here. “Verum” by Storm Humbert tells of Rev, a dealer in the drug Verum which induces full-immersion “memories” or perhaps “experi­ences” of one’s past – or an invented past. He’s been the best in the business but then starts to lose clients to Gina, a rival who is even better than him. He arranges to meet her, with less than noble motives, but over time the two become friends of a sort, and Rev learns Gina’s real situation – and the resolution involves him using what he’s learned from her for a final gift to her. “FiGen: A Love Story” by Kristi DeMeester, is barely SF. A woman whose marriage seems to be going flat learns about FiGen, a product that promises to predict the likelihood your partner will cheat on you, and even with whom. She buys it, and of course is tempted to spy on the woman with whom her husband is supposedly likely to have an af­fair. The twist is predictable, but nicely executed, though the ending, to me, seemed a step too pat.

Once again the best story in Galaxy’s Edge is a short-short, Auston Habershaw‘s “What the Plague Did to Us“, which is told by a survivor of a zombie apocalypse – with a twist (and a moral point) well conveyed by an excellent last line.

I can count on Bourbon Penn intriguing me with at least one really weird story per issue. My favorite from July is “Giving a Blood Transfusion to a Stone” by Jonathan Plombon. I suppose in a sense the story could be called surrealist. It’s a love story, about a turtle named Indolent and a woman named Magnificent, who has no lips. (Of course, neither does Indolent, being a turtle.) Others characters include a life-sized self-help book and Indolent’s feeling, which lives apart from him. You see what sort of story this is – and it could become twee, or just fail to hang together, but I thought it avoided either problem: instead it was funny, and managed to make weird sense. This issue also includes a fine Rich Larson piece, set roughly tomorrow, called “Scrubbing“, which features a woman and a man at a clinic where they will get their memories of an ugly #MeToo sort of incident erased (shades of John Kessel’s “Hearts Do Not in Eyes Shine” and also Eternal Sunshine of the Spotless Mind, though on a smaller scale). The point of the story is really the characters, and a sort of interrogation of the man’s behavior, in which he doesn’t come off well.

The fourth issue of the revised Amazing Stories features several stories I enjoyed without quite think­ing they worked. Tatiana Ivanova‘s “The Sched­uled War” (translated from the Russian by Alex Shvartsman) reminded me of Mack Reynolds’s Joe Mauser stories, but with war replaced by corporate-sponsored, scheduled fighting. In this case, a war can’t go forth on time because one cranky farmer refuses to move away from the arranged battlefield. Enjoyable, but I thought the ending was too heavily manipulated by the author. “The Prufrock Whis­perer” by Brian Rappatta has a goofy idea that still intrigued: spectacular scientific advances are “seeded” by certain poetry, to be decoded when a sufficiently talented scientist encounters the poems. What makes the story work is more mundane, though – the depiction of the narrator, an alcoholic who visits a bar once a month to prove he’s really quit drinking, and his chance hearing of an Amish woman poet on open mic night. Alas, there’s some rival secret agent hugger mugger that I thought undermined things. Still, a well-told story. Another wacky idea motivates Jo Miles‘s “#savejade” – a nomiphage, a creature that fastens to everyone with the same name and sucks up their identities. That concept didn’t quite work for me, but the story’s main character, Jade Whitmore, a barista and video-blogger who is a bit too obsessed with another, much more successful Jade Whitmore, was convincingly portrayed, and her scheme to stop the nomiphage, and her journey as a result, was solidly worked out. 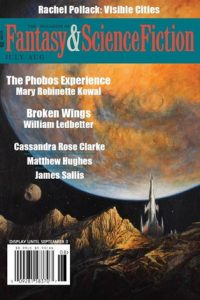