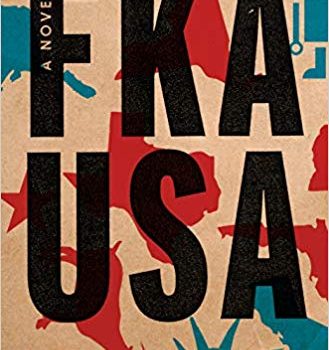 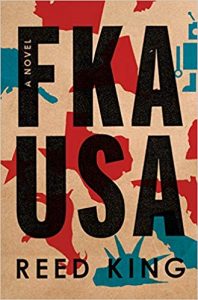 Whether Reed King’s FKA USA works for you is going to depend on who you are as a reader. To some extent, this is true of any book in the world, but it’s particularly true for this book, a sprawling, self-conscious novel of the American apocalypse inspired by equal parts David Foster Wallace and The Wizard of Oz. Some will find the reading experience exhilarating, while others will find it tiresome. Some will suspect that Reed King is punching way above his weight, while others won’t recognize (or care) that a heavier weight class exists. So it goes.

By the late 2080s, the American nation has split up and re-formed into multiple sovereign countries, most of which are named and run by corporations. From the town of Crunch 407, part of the Crunch, United Colonies (once Missouri), a teenager named Truckee Wallace is sent on a mission to San Francisco by Crunch’s all-powerful CEO. Truckee must stop a supervillain from spreading the zombifying drug Jump among the populace. He is joined in this trek by a talking goat named Barnaby, a “Straw Man” named Tiny Tim, and a sentient female android named Sammy. Even though the details are outlandish, the narrative is your basic group quest, and the journey has the usual encounters, setbacks, danger, and joy.

The same goes for the prose and characteriza­tion. There’s nothing terribly new or exciting there; the prose is clean and transparent, if unnecessar­ily vulgar, and the characters are well-delineated without having any motivations that disrupt the main purpose of propping up Truckee. Extensive, detailed footnotes line many of the pages, and the book has six fictional appendices. These quirks, plus the corporatism, plus the main character’s name, call back to David Foster Wallace’s Infinite Jest, but King is not nearly as skilled as Wallace at literary pretension, and King’s footnotes feel like unnecessary interruptions to proffer information we didn’t really need to know.

Occasionally, the book shows heart, as when Truckee sees Barnaby for the first time: “Its skinny little legs tapered into hooves, and for a second I was near to crying… because of those little hooves, because of its aliveness, because it had survived.” It also sometimes reaches into thoughtful com­mentary, as when Truckee watches the land pass by during a train trip:

I couldn’t believe how much space there was, and that, for a few hundred years, it had all been the same space – bound by laws and money and a common idea about what it meant to be a person. Looking out over all that land, it amazed me not that America had fallen but that it had ever existed at all.

However, these moments are few and far between. For the most part, the book is snide, dirty, and hopeless. Truckee thinks constantly about sex, which may be realistic for a teenage boy but is unwelcome for non-teenage-boy-minded readers. He has a dizzy­ingly misanthropic narrative perspective: “That was the world we lived in too. Almost everything true was flavored a little like vomit.” Herky-jerky pacing and an excruciatingly long, Bond-villain-style ending sequence round out this list of flaws.

FKA USA is clearly intended as satire, in mood and style, but it is so reasonably apocalyptic, so painfully close to the bleakest projections of what the late-21st century will look like (if we survive), that the net effect is depressing. Hawaii and the coastlines have sunk into the rising sea, the outdoor temperature is too high for human survival, the Big One (a storied earthquake) took out half the West Coast, food can no longer grow in the polluted earth, a huge die-off of most animal species has occurred, and water is a commodity so scarce that drinking one’s own filtered urine occurs daily. In essence, human life is close to extinction due to massive structural greed. None of that seems unrealistic. The corporate control is too frightening, too close, to be funny.

“Fun” is really the X factor in the reading experience here. From this critic’s perspective, no one in the book seems to be having fun, and the reader certainly isn’t, when she’s got hundreds more pages to go, hundreds more metaphors involving farts and pubic hair and erections to pass her eyes over (seriously, there’s one on every other page). But some critics seemed to really enjoy reading this book. Perhaps those who love Philip K. Dick, but want more jokes per capita, will have a ball with FKA USA, but those who are truly worried about the future of this planet, of this political system, of this very species, may find it hard to crack a smile. 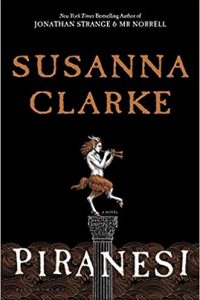