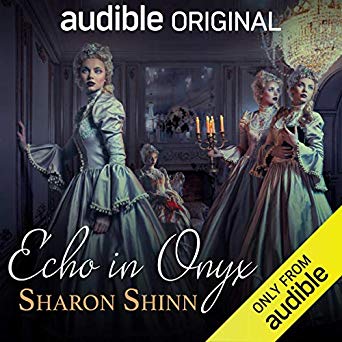 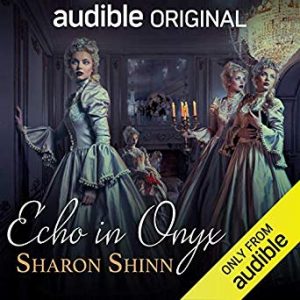 It is always a pleasure to review books that, at the present time, are only available in audio; I love alerting readers to an exclusive. Author Sharon Shinn’s latest series is an entire trilogy that (at least for now) can only be heard and not read.

The setting for the Uncommon Echoes tril­ogy is somewhat reminiscent of Shinn’s Twelve Houses books: A king rules over seven provinces governed by high nobles, and some provinces are loyal to King Harold, while others are plot­ting revolution. Unlike that previous series, the nobles in the disloyal provinces have no desire to rule over the whole country; they merely want to secede, and the magic setup here is entirely different. Several centuries ago, during the wars to unify the region, the goddess granted high nobles “echoes”: wordless, possibly mindless, slightly less substantial duplicates of themselves, who copy the noble’s every move. The intention was to deter assassins, who would not be sure who was the original and which the copies. In the present day, they’re mainly a signifier of social status – but they have the potential to be much more.

In Echo in Onyx, country girl Brianna is the fiercely loyal personal maid to Lady Marguerite, daughter of the governor of Orenza. Marguerite’s three echoes make her a suitable match for the crown prince, Cormac, who has the same num­ber of echoes, and the union would help calm tensions in Marguerite’s rebellious province. Marguerite dutifully agrees to travel to the capi­tal city of Camarria so that the prince can make his choice among the kingdom’s eligible women, even if her affections are already given to a secret lover. (You will figure out the identity of this lover long before Brianna does.) But Marguerite and Brianna unfortunately encounter Cormac’s illegitimate half-brother, the spoiled and crude Jamison, on the road. Jamison attempts to sexually assault Marguerite, and in the ensuing struggle, both Jamison and one of Marguerite’s echoes are killed. Desperate to cover up the two deaths, Marguerite and Brianna hatch a danger­ous plan: Brianna will pose as Marguerite’s lost echo, hiding her features under a veil and attempting to mimic everything her mistress does. Can Brianna carry off this intricate and risky imposture in the ever-watchful milieu of the royal court – and right under the nose of Brianna’s romantic interest, Nico, who just happens to be assistant to the King’s Inquisitor?

Scrappy and defensive Chessie is the star of Echo in Emerald. Taking on various jobs across the city of Camarria, she’s hiding both from the notice of her frightening father Malachi, the King’s Inquisitor, and the clear indication of her noble blood – her two echoes. She takes care of the latter issue by styling and dressing the echoes so that they no longer resemble her exactly; she supports her pretense that her echoes are her close friends Red and Scar with her unique ability to shift her consciousness among her three bodies. But after she’s roped into assisting the kind and attractive Lord Dezmen into investigating an as­sassination attempt against Prince Cormac and the subsequent mysterious death of the assassin, she must come out of the shadows and confront the dark secrets of her past.

Finally, Echo in Amethyst is told from the per­spective of an echo. The narcissistic and casually cruel Lady Elyssa of Alberta loathes her echoes. She’d rather not have three copies of herself fol­lowing her around, but she needs the consequence they lend her as a high noble, especially as her father seeks out an advantageous marriage for her. The young woman deals with her frustrations by torturing her echoes. Over the years, though, the pain awakens one of the echoes to sentience and even a limited amount of independence, if Elyssa loosens her control. When Elyssa is put forward as a potential bride for the king’s younger son, Prince Jordan, neither is terribly enthusiastic about the match, but their close proximity leads Jordan to recognize that Elyssa’s echo is becom­ing her own person. He names the echo Hope, and the two begin an improbable romance, even as Elyssa becomes entangled in her province’s plans for rebellion. Can Hope use the knowledge she’s gained as Elyssa’s shadow to save the kingdom and somehow find freedom?

Emily Bauer acts as first-person narrator for all three books, voicing a distinct character for each. Even if the pitch or accent isn’t incredibly different for each protagonist, she successfully evokes a separate emotional tone and pace for cheerful, practical maid Brianna in book one; streetwise but vulnerable courier/tavern wench/guard/secret noble Chessie in book two; and the innocent, frightened, but determined newly sentient echo Hope.

As always, Shinn’s romantic fantasy (fantastic romance?) offers a mostly well-built and usually interesting world, magic, characters to root for or to despise, and an obvious Chosen Couple who will overcome all obstacles to get together. The world is always slightly contrived, with some bits of logic that get bent to serve each story. (For example, book one implies, and book three outright demonstrates, that echoes can develop individual consciousness, which makes Chessie’s ability to overwrite her own echoes’ conscious­ness in book two downright disturbing.)

Let’s be honest: most of us are fans of at least one author who sticks to a formula, even if it isn’t a perfect one; picking up a new book (or reread­ing an old one) is like sinking into a nice warm bath. I simply enjoy Shinn’s unique mix of frothy and dark. Brianna’s teasing flirtations with Nico are set against the brutality of Jamison’s assault and subsequent murder. Chessie’s sassy street urchin persona dissolves when we discover why she’s really hiding from her father. In the first book, Elyssa seems to be the snooty mean girl that one always encounters in fictional high so­ciety, but book three reveals just what’s festering underneath that beautiful face.

In short, this is classic Shinn, and I can’t resist it. You might not be able to, either.