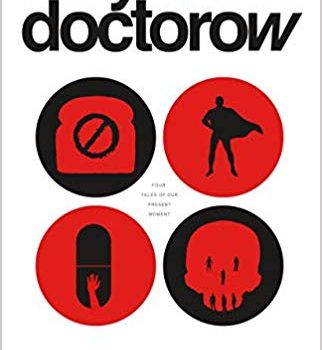 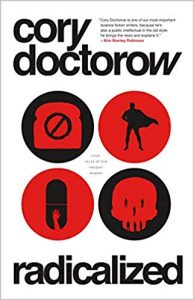 There’s a glib and half-serious theory that the career of every SF writer is contained in embryonic form in their first short-story sale. For Cory Doctorow, this critical trick holds partially true. His first major work – “Craphound” from 1998 – displayed his affinity for droll humor laced with melancholy; his hipness and intimacy with trends, fads, and bubbling-under currents of culture; his speculative chops or ability to turn a single novum into an unpredictable wild ride; and his affinity for underdog characters (no chronicler of lords and supermen he). All that was missing from this debut, and which would soon crop up in his growing oeuvre, was Doctorow’s politically engaged, monitory concerns and his desire to upset old paradigms and rewrite all possible sociopoliti­cal assumptions. So it’s fair to say that for the past 20 years Doctorow has been on an undeviating path to both entertain and enlighten his readers, deploy­ing both humanistic virtues and an nth-generation cyberpunk toolkit.

His latest, a collection of four novellas, subtitled “Four Tales of Our Present Moment”, fits the template perfectly, and extends his vision further into a realm where impassioned advocacy, Upton-Sinclairish muckraking, and Dickensian-Hugonian ashcan realism drives a kind of partisan or Cassandran science fiction seen before mostly during the post-WWII atomic bomb panic (think On the Beach) and 1960s New Wave-Age of Aquarius agitation (think Bug Jack Barron). Those earlier troubled eras resonate with our current quandary, but the “present moment” under Doctorow’s microscope – or is that a sniper’s crosshairs? – has its own unique features that he seeks to elucidate. These stories walk a razor’s edge between literature and propaganda, aesthetics and bludgeoning, subtlety and stridency, rant and revelation. The only guaranteed outcome after reading is that no one can be indifferent to them.

Each of these tales revolves around a different acknowledged passion of Doctorow’s, but together they limn the intricacies of one central issue: how can the needs of the individual and society be reconciled, and how can we repair any imbalances in the equation?

The first tale is “Unauthorized Bread”, a medi­tation on the right to repair, digital permissions, and the meaning of ownership in a capitalist, digital milieu. We find ourselves in the realm of Sterling’s “Bicycle Repairman”. Our protagonist is Salima, once a refugee but now granted permanent residency in the US, albeit in the stressed lower classes. When her toaster oven – which only ac­cepts proprietary bread input – goes offline, she teaches herself to hack its software. This leads to a general spree of appliance tampering among Salima and her community, which in turn brings them into confrontation with corporate forces. Ultimately, a path forward for everyone is found, but not without some suspenseful moments.

Salima’s backstory is dense and affecting, and her friendship with a woman named Nadifa and her family is touchingly depicted. Doctorow is a master of the miniutiae of living the desperate and downtrodden life – the terrors and the joys and the banality of it. In fact, each of these tales reflects its chosen stratum of society in convincing depth. The issues under examination here arise organically out of Salima’s life, the “villains” are represented fairly, and there is little outright preachiness. It’s a good and inviting opener.

The next story, “Model Minority”, strikes me as the least successful of the lot. Not because of any technical or imaginative flaws, for it’s engrossing and dramatic, but only because it’s been done so thoroughly before. In an alternate timeline to ours, a certain superhero named the American Eagle ex­ists, along with at least one other: an unpowered billionaire vigilante named “Bruce.” When the American Eagle sees an episode of racist police brutality, he intervenes – really for the first time in his long career. But his well-meaning aid goes awry, through a lack of self-knowledge and self-questioning, and he ends up doing more harm than good. Doctorow wants to show us the limits of do-goodism, paternalism, vigilantism, and the whole notion of superpowers, and he does. But it’s a scenario that has already been fully plumbed – to exhaustion? – by Alan Moore, Brian Bendis, Garth Ennis, Warren Ellis, Peter Milligan, Matt Fraction, Jeff Lemire, and others. This outing doesn’t bring any fresh insights to the issues.

The title story takes on the medico-insurance-pharma complex, as well as governmental inertia and special interests, with a dessert course of the dark web. Our hero is one Joe Gorman – a perfect Everyman name – whose wife develops terminal breast cancer. An experimental treatment holds out hope – but at a cost of 1.5 million dollars that insurance won’t cover. Frustrated and without other recourses, Joe ends up in an outlaw internet forum where people similarly screwed-over blow off steam and plot revenge. When words turn to deeds, average, middle-class guy Joe finds himself on the far side of the funhouse mirror.

Again, Doctorow nails his chosen milieu – typical suburban law-abiding and unquestioning existence – with a plethora of keenly observed details. And Joe Gorman’s plight is an authentic extension of his circumstances. Society’s slow accommodation to the nudges of violence seems realistic and fair-minded. Like the first story, this one feels balanced and not overly programmatic.

The last tale is “The Masque of the Red Death”, following Doctorow’s practice of repurposing classic titles. (See his versions of “I, Robot” and “The Man Who Sold the Moon”.) But in my eyes, a better title might have been “Farnham’s Freehold”. For just as in the Heinlein novel, we are dealing with survivalists and apocalypse and the question of what the best Darwinian strategy is for the species: altruism or selfishness?

Martin Mars is a rich jerk, too smart for his own good, who intends to ride out an anticipated apocalypse in his Arizona stronghold, along with 30 chosen comrades. He’s prepped for every con­tingency he can imagine, and when the big day of doom arrives, he’s almost gleeful. Needless to say, all his egocentric Randian focus leads straight to the pit. Doctorow inhabits Martin’s mind with true empathetic brio, making us cringe, yet also revel along with Martin at his superiority. He digs deep into the hidden ecstasies of Armageddon, the kind of manic pleasures that M.P. Shiel showed us in The Purple Cloud. His step-by-step charting of things going pear-shaped is relentless and biting.

There’s one misstep at the very end, though, that showcases the problematic nature of such moral­istic narratives as these. We have ridden Martin’s shoulders exclusively for 99% of the tale. But then, at the climactic moment, just to make absolutely sure we understand that Martin’s approach to living was wrong, Doctorow breaks his consistent point-of-view to put us in the head of the Good Alternative Life Philosopher, Graciela.

Graciela had learned a lot since she’d gone back to Phoenix, so sick she thought she was dying. She’d learned first aid, and basic sanita­tion, and the kind of food hygiene you used in a pandemic. She’d learned the word pandemic.

Lesson driven home, we must then jump jarringly back to Martin’s consciousness for the coda. The whole section illustrates the artistic pitfalls of privileg­ing message over esthetics. But of course, Doctorow would say, that’s just what I wanted to do. Readers must be likewise onboard for maximum enjoyment.

The Radicalized collection strikes me in some sense as an episode of a primo TV anthology series – Night Gallery in the classical mode, or maybe in a more modern version, Philip K. Dick’s Electric Dreams. It gives us polymath Cory Doctorow as talented Rod Serling – himself both a dreamer and a social crusader – telling us that he’s going to show us, as vividly as he can, several nightmares or future hells, but that somehow the human spirit and soul will emerge intact and even triumphant. 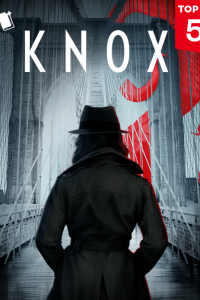