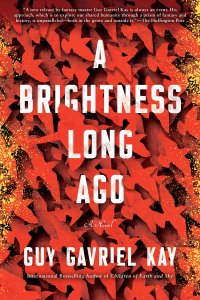 The Locus Bestsellers for August include top titles A Brightness Long Ago by Guy Gavriel Kay, A Game of Thrones by George R.R. Martin, and Star Wars: Master & Apprentice by Claudia Gray.

New releases dominated the hardcover list, with our four top finishers released in May, but Guy Gavriel Kay’s A Brightness Long Ago claimed first place, barely beating Ted Chiang’s new story collection Exhalation in second. The new runner-up was The Gordian Protocol (Baen), a new stand-alone from David Weber & Jacob Holo. We had 52 nominated titles, down from 54 last month.

Old favorites continue to take the top spots on the paperback list, with A Game of Thrones by George R.R. Martin in first place, followed closely in the number two spot by Neil Gaiman & Terry Pratchett’s Good Omens. There were no new runners-up. There were 50 titles nominated, down from last month’s 64.

Not satisfied with nabbing the top spot on the paperback list, George R.R. Martin’s A Game of Thrones narrowly edged N.K. Jemisin’s The Fifth Season out of first place on the trade paperback list. There were no new runners-up. We had 47 titles nominated, down from 72 last month.

In media and gaming related books, Star Wars: Master & Apprentice by Claudia Gray moved up from second last month and into first place with a substantial lead over second place finisher Greg Weisman’s Magic the Gathering: War of the Spark: Ravnica. There were no new runners-up. We had 21 nominated titles, down from last month’s 24.

February 25, 2015 admin Comments Off on New in Paperback, January – February

Episode 23: In conversation with Ted Chiang: “The Great Silence” Most people may know about Ted from “Story of Your Life” which was filmed as Arrival, but his reputation with readers and writers as a top tier craftsman of the short form was well established before then. We had the pleasure of asking Ted some questions about a short (very short!) piece of his from 2015, part of an art installation