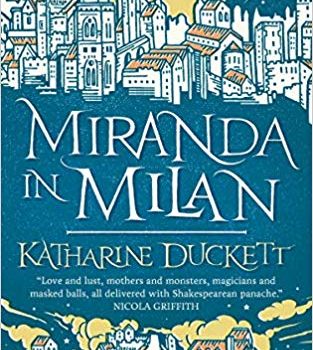 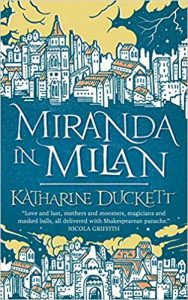 Of all Shakespeare plays, it seems that The Tem­pest is one of the more popular among writers of speculative fiction. Considering that it boasts among its dramatis personae at least one wizard and one spirit, an isolated young woman, treach­erous lords and a now-gone witch, it’s hardly surprising that this should be the case – especially when the action takes place on a magical island, and the play ends with its protagonists about to return to Milan for the restoration of Prospero to his dukedom and the marriage of Miranda to the Prince of Naples. (That’s an invitation to explore what happens after if ever there was one.)

In the last couple of years, I’ve read at least three different writers’ approaches to The Tem­pest: Jacqueline Carey’s Miranda and Caliban, Foz Meadows’s novella Coral Bones, and now Katharine Duckett’s Miranda in Milan, from Tor.com Publishing’s novella line. Both the no­vellas treat the aftermath of Miranda’s return to so-called civilisation, away from the wildness of her island, and it seems appropriate to me that both have as their protagonist a queer Miranda, a Miranda whose queerness – unmarked and unremarked in her island solitude among spirits, Caliban, and birds and beasts – is part of what isolates her and sets her apart on her return to Italy. And it forms part of her struggle to choose between her father’s plans and her wishes for her own life.

Miranda in Milan opens, naturally enough, in Milan. Miranda has just entered a world that is entirely strange to her, full of secrets and intrigues and rules she doesn’t understand. Her father’s courtiers avoid her and seem to fear her; the servants don’t speak to her and avoid her as much as possible; she’s forced to wear a long black veil to hide her face whenever she leaves her rooms; she’s ignored by her father (who she rather fears as much as feels affection for, and so is disinclined to ask him to explain) and she has no word from her affianced husband, Ferdinand, Prince of Naples.

The only person who will treat her as though she’s a person and not a monster is the servant Dorothea, a young foreign woman who has magic of her own – albeit not at Prospero’s level, nor yet enough to provide her with the safety to practice a profession that isn’t “servant.” Between them, Miranda and Dorothea uncover yet more layers to the mystery of Miranda’s treatment: Prospero claims to have forgiven his brother Antonio, so why does Antonio now languish in chains in a hidden dungeon? Why is Miranda’s mother’s portrait veiled in black, and why does no one, not even her maternal aunt, speak of her to Miranda? And what does Prospero actually intend?

As they investigate, Miranda and Dorothea stumble into some of Prospero’s darkest secrets, while discovering a mutual attraction that’s com­plicated by Miranda’s upbringing, her marriage/engagement to Ferdinand, and the distinctions of class and station that lie between them. As Dorothea says,

Even if we discard your royal titles when we’re alone – even if we pretend you’re not to be Ferdinand’s queen – I don’t want to be your servant, Miranda. I know that’s how I entered your life, but I can’t bear the thought of continuing on that way. It’s hard enough for me to imagine finding happiness as your mistress, much less your maid.

There’s a subtle and subdued thematic argu­ment in here about power and responsibility, about the harm of imposing one’s own values and one’s own desires on the people around one – which Prospero does, solipsistic and arrogant as a toddler in a tantrum, and just as heedless of anyone else, albeit a toddler with great and terrible arcane powers. This is played out in Miranda and Dorothea’s relationship, and in the discourse of “civilisation” by which Prospero claimed the right to rule over the island of Caliban and Sycorax. Because Dorothea is a foreigner, and moreover one who changed her name from Duriya to something more Italian in order to be able to fit in, in order to be less at risk, she has a different view of Prospero’s “civilisation” than many of the people who surround Miranda – and confronted with Duriya-Dorothea’s pointed observations, Miranda must in her turn confront the hard truths that underlie both her father’s discourse of “civilisation” and his history that led to Miranda growing up in island solitude.

Duckett writes an engaging tale, with crisp pacing and precise, attractive prose. Her charac­ters are compelling individuals, fully developed with desires and personalities of their own, and the novella mounts with ever-increasing tension to its conclusion, in which Miranda must make a choice between the constraints of civilisation and the possibilities of wildness – of choosing her own way in collaboration with Duriya. If I have one quibble, it’s that the relationship between Miranda and Duriya develops and deepens very quickly. I’d have liked to see a little more of their courtship.

Miranda in Milan is very much concerned with relationships between women: all of its primary relationships, its emotionally important relationships, centre on women – and on the fail­ures of empathy of the men around them. It’s a very gripping story, and one I enjoyed very much. I look forward to seeing more of Duckett’s work in print in the years to come. 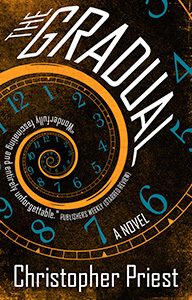