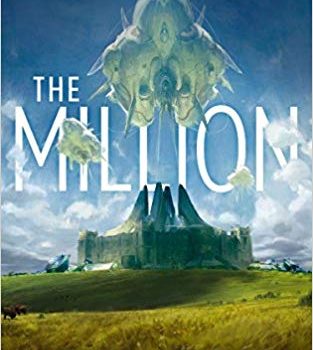 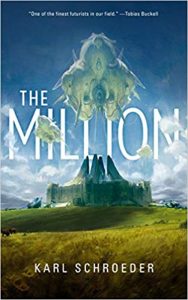 The Million by Karl Schroeder is a very intrigu­ing novella set in the future of his novel Lockstep, which I have not read. In this future, Earth is in­habited by close to one million people who strictly maintain their population and the ecological integ­rity of the Earth. Any violation – an unauthorized Visitor, or an unplanned child – is subject to severe punishment at the hands of the Auditors. Gavin is an unauthorized child living on the Chaffee estate, having been kept a secret his whole life, but things come crashing down one day with they are attacked, and his existence is discovered. His father is killed, and his brother arrested. One of the attackers is killed as well, and Gavin, escaping, takes an offered opportunity to take the identity of that man, Neil Makhav, and to apply to join the Auditors. Another new auditor candidate, Elana, is part of the Hundred, the most privileged among the Million. Both Gavin and Elana are charged with secondary tasks by their “families” – Elana’s Aunt needs a plant in the Auditors to ensure their family’s position remains secure through the next Jubilee, in which ten billion Visitors will run roughshod over Earth for a month. And Gavin, besides his own secret quest to free Bernie, is asked by his new “uncle” Eli Makhav to do some spying for his family. Gavin and Elana become friends of a sort, and their separate snooping leads to a completely unexpected revelation. This is enjoyable indeed, but a bit thin. Schroeder’s ideas are (as usual for him) fascinating, but they need more development and examination – all of which I suspect is to be found in the novel.

People Change is a slim new collection of stories and poems from Aqueduct featuring Gwynne Garfinkle. There are six short stories, and quite a few poems, one of the former and a number of the latter new to the collection. The stories are good solid work – I quite liked the original piece, “The Paper Doll Golems“, set in New York in 1915, in which Ruthie, a 13-year-old Jewish girl recovering from influenza, decides to animate two of her paper dolls by writing LIVE on their forehead. The dolls don’t much like this new life – and moreover they carry the attitudes the fashion­able young women they are modeled on might have in their real lives. And, of course, Ruthie, an invalid, really wants to LIVE herself.

The theme of Mother of Invention is women (and other genders too) creating and inventing. It opens nicely, with “Mother, Mother, Will You Play With Me?” by Seanan McGuire, in which Nic keeps waking up older, playing “games” her “Mother” suggests, and learning more each time. It’s an AI learning story, and we’ve seen those before, but it’s quite effectively done.

Indeed, all the best stories here seem focused on AI to some degree. “Sexy Robot Heroes” by Sandra McDonald is about Biyu, who has escaped her own family to achieve her true identity, and to work on ship engines. Robots are supplied for many func­tions including sexual gratification, but Biyu is as confused about their identity, and her needs, as ever… and she’s also tangled in dynastic struggles. It’s an exciting piece. Justina Robson in “S’elfie” writes from the POV of Huntress, a S’elfie herself – that is, an AI assistant to a person, who records everything, gives advice, and communicates with its fellows. There’s a lot of potential there – for mischief, for good, for privacy loss. And all gets bigger when a sort of “S’elfie server” comes into the picture. This is first-rate extrapolative SF. 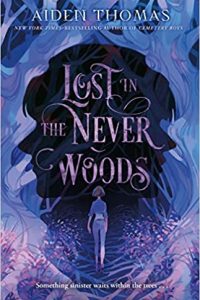