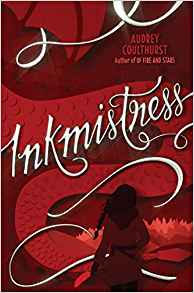 In its opening paragraphs, Audrey Coulthurst’s Inkmistress seems to be a story about love. The protagonist, Asra, declares her love and longing for Ina, the beautiful girl who lives in the village below, and soon, with the coming of spring, will return to her. They are aware that their relationship must remain secret – the fear engendered by Asra’s demigod status combined with the fact that they are both female – but they love each other. They LOVE each other. Asra might be alone, might be desper­ately lonely, but there is the promise of Ina to keep her warm through the long winter months in the mountains. And then Ina arrives early, and she is in trouble, and in a matter of days Asra does something foolish, a catastrophe follows, and everything in her world is blown to smithereens.

First and foremost, Inkmistress is an epic tale and, for all that it starts on a remote mountaintop, it is also filled with a ton of palace intrigue. Calling to mind the great sweeping fantasies of Guy Gavriel Kay as well as the intricate workings of Holly Black’s ongoing Folk of the Air series, Inkmistress begins with the story of two girls and their secrets but soon becomes a tale large enough to encompass an entire kingdom. The magical favor that Asra does for Ina is innocently given, but the fallout is enormous and life-changing. As Ina embarks on a path fueled by fury and lust for blood, Asra scrambles to find a way to contain her. She must also grapple with some ugly truths about their relationship and her guilt over her too-casual use of power. As any fan of fairy tales knows, use of magic always demands a price be paid. In this case, the price immediately spins beyond Asra’s control and it keeps getting higher as the narrative progresses.

I am reluctant to give away much of the specific plot elements for Inkmistress because this is a very plot-intensive book, but they include aspects of mystery, romance, and adventure. Clues must be followed to get to important answers, hearts are broken (more than once), and layers of betrayal are prevalent. (No one can trust anyone!) Asra’s magical ability allows her to exert enormous control over events, but how to wield that power, and the many people who want to control it, are problems. For much of the book she struggles to figure out the right thing to do, which is not easy when all the choices appear grim. Ultimately, she realizes that everything she once believed so ardently was based on a host of lies. Studying her people’s history offers little solace, as their land is “a kingdom built on blood.” She wants a world of kindness but brutality is all everyone respects, and even she succumbs to its easy lure more than once. So also, painfully, does Ina to the most disastrous of results.

Inkmistress is a novel to sink into, a great, grand story full of dramatic moments that will sweep read­ers away. Audrey Coulthurst promises much in her opening pages and she comes through in all the ways that matter. I can’t help but think there might be more in store for Asra in the future, but even if there is not, her story is a thrilling way to while away the hours as we grapple with our own daily political intrigue. 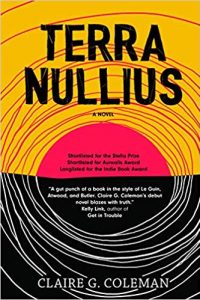