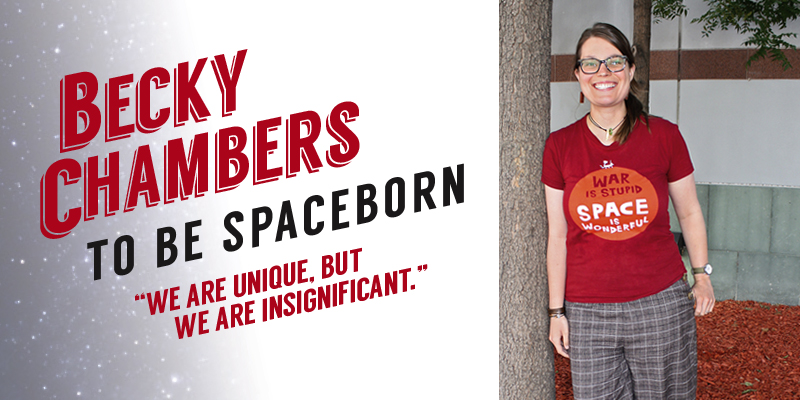 Rebecca Marie Chambers was born in 1985 in Southern California and grew up outside Los Angeles before relocat­ing at 18 to study theater at the University of San Francisco. She worked in theater for years before becoming a freelance writer, and spent time in Iceland and Scotland before returning to California, where she lives now with her wife, Berglaug Asmundardottir.

Chambers crowdfunded her debut novel The Long Way to a Small, Angry Planet on Kickstarter in 2012 and subsequently self-published the book; it was later published by Hodder & Stoughton and Harper Voyager in 2015, and was an Arthur C. Clarke, Brit­ish Fantasy, and Kitschie Award finalist. The Wayfarers universe continues in Hugo and Clarke Award finalist A Closed and Common Orbit (2016) and Record of a Spaceborn Few (2018). She has also published a few short stories, and recently sold a pair of solarpunk novellas in a new series to Tor.com Publishing.

“My dad worked in aerospace en­gineering, and my mom is an astrobiology educator. She and I actually did a panel together at Worldcon this year. It was awesome. She teaches high school and does education consulting for JPL and Howard Hughes Medical Institute, so she does a lot of really cool work. It crossed my mind to be a scientist – I al­ways loved science – but it was clear that wasn’t the path for me. My problem is I’m interested in everything, and I would find it challenging to specialize. I don’t have the level of patience required to do tedious lab work. It’s funny that I say that, because I write books, and those obviously take pa­tience, but it’s a different kind of patience than ‘I’m going into the lab to treat this Petri dish in exactly the same way every day.’ I don’t have that particular kind of patience. I’ve always gravitated toward the arts.

“Everybody else in my family works in or studied STEM in one capacity or another, and I was the weird one who studied the­ater. I still loved science, though, and that was always where my brain and my heart really lived. I worked in theater for a while, and it became clear to me that the stories I was interested in were not the stories taking place there. I decided it was worth paying attention to the fact that my colleagues would all go to one-act festivals and openings of plays at other theaters after work, or they’d meet to work on their playwriting – theater was their whole life – whereas I would go home and watch Star Trek and play video games. At some point I said, ‘These are the stories I want to tell. These are the stories I care about most.’ So I started focusing on writing science fiction instead.

“I ran box offices for a number of years. Whenever I was going to or from work, I was writing. I had a long bus ride to one of the theaters I worked at, and bus rides are an amazing time to just sit and worldbuild, especially since this was before smart­phones. Boredom is so important. I still use boredom in my day-to-day if I’m stuck on something. The worst thing I can do is go online and start goofing around on web­sites or chatting with my friends, because then nothing else gets done. If I get stuck, and I haven’t done enough writing that day, I just sit back and wait. It’s boring and it sucks, but eventually your brain starts telling little stories.

“There was a brief period where I was bartending, as sort of a transitional thing. I was trying to figure out what to do next, and I decided to try my hand at writing full-time. I started freelanc­ing, and did technical writing to pay the bills. I’ve always been good with computers and I really like technology – that’s a language I speak, so it felt like a natural fit. As a technical writer, you’re translating engineer-speak into normal human-speak. I used that to keep the fridge relatively full until the rest of my writing career picked up.

“I’ve always written. I’m more comfort­able writing than speaking a lot of the time – I’m not uncomfortable speaking, but I express myself better when I write, and that’s always been the case, even when I was younger. As a kid I was con­stantly writing stories, and constantly reading, too. I was reading before I start­ed school. My teachers would just let me read books in the back of the class, and often I would use that time to write as well. Fantasy was more of my upbringing, at least as far as books go. My mom loves science fiction and fantasy, and that rubbed off on me. We watched Star Trek together, and Star Wars, and all of that – Star Wars is more fantasy, but we can save that fight for another time. My mom read me The Hobbit and Lord of the Rings as bedtime stories, and gave me A Wrinkle in Time because she loved it as a kid – she really encouraged me to read. She was always taking me to the library and buying me books for birthdays.

“When I first started writing with the goal of getting published, I began with short fiction because I thought that was how it was done. I’d always loved to write and I loved to tell stories, but I was like, ‘How do you actually do this as a job? What does that look like?’ I looked into authors I liked, and read their biogra­phies, just trying to sleuth out how this career works. So many of them started with short fiction and then wrote a novel, and I got it into my head that I had to start that way, too. It makes sense because in school you’re not taught to write books, you’re taught to write short stories. I beat my head against the wall for a long time trying to write stories, and I am just not built for it. I’ve had a few stories published, and they’re all things I wrote after my first book. Those stories were all commissioned by somebody who came to me and said, ‘Here’s this anthology, would you like to be part of it?’ I can write stories in that context, but when I sit around trying to come up with my own short stuff, I hit a wall. The stories I make up on my own do better if I have more space to spread out. It took me a long time to get past that idea of, ‘This is how you’re supposed to start.’ Playwriting didn’t grab me either. I didn’t do much of that – a few ‘play-in-a-day’ or sketch comedy things, just for fun. In school I split my time between acting and tech­nical theater. I liked building sets and working in the shop, and loved being onstage as well. I never studied writing or took a creative writing class. In gen­eral, I find I learn better by just trying something for myself.

“I wrote fanfic when I was younger, and I learned a lot from that. It makes good training wheels. Some writers disparage fanfic because it’s like, ‘Oh, you’re not learning how to make your own stuff.’ That’s okay! You can start with someone else’s fully fledged character – especially since your version of that character may be different than what’s textually there. It’s fine to start with a character that al­ready exists in a world you didn’t build, because it’s still coming from a place of love. A good story needs that more than anything else.” 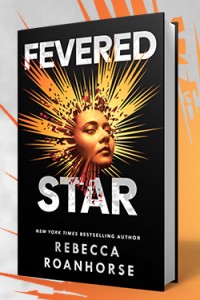