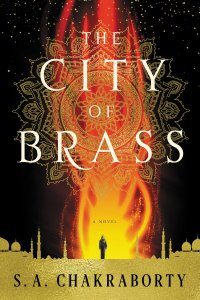 The City of Brass by first-novelist S.A. Chakraborty begins a trilogy. Though notably ambitious – taking fantastic elements (and El­ementals) from a wide range of Eastern/Middle Eastern myths and folklore and switching be­tween viewpoint characters in two plotlines that converge – it flows with such natural ease, 500-plus pages become swift and compelling. Back­ground emerges from scenes with enough blunt words, unflinching observation, and strong emotion for title city Daevabad, ancient home to long-lived spirits wielding many magics, to feel as gritty and real (troubled amid decaying grandeur) as Cairo during Napoleon’s Egyptian war, where the book opens.

The first three chapters focus on the sly tricks and strangely mounting perils of Nahri, who preys on her “marks” as witch and healer – a role she takes for granted but plays better than she thinks. This scruffy young citizen of Cairo’s slums and markets can speak a tongue nobody else seems to know, understand foreign lan­guages soon as she hears them, and sense the nature of other people’s illness, while her own wounds heal with uncanny speed.

None of this might have changed her life if not for an accidental feat of magic. Planning to con a wealthy Turk out of his house so she can rob it, she uses her “private” tongue for a spell with unexpected consequences. A monstrous entity manifests in a flash, roaring “I will kill whoever called me here!” Her first reaction (italicized like all of Nahri’s unvoiced thoughts): Why is some lunatic fire creature speaking my lan­guage? Instead of killing her, the angry djinn saves both of them from wild attacks: first by rival fire spirits who recognize her as a hybrid with links to a famous family of djinn, then by ravening ghouls who drive him to snatch her up and flee, via flying carpet.

Before her plotline moves beyond the vast desert and cursed lake hiding the City of Brass from curious humans, the fourth chapter in­troduces second viewpoint character Ali, a royal prince of Daevabad who sees the place as natives do. It’s messy, fractious, and threatened by more than one kind of rebel: some from an oppressed underclass of part-human hybrids, others from the city’s original rulers. Since djinn society reflects the world of short-lived mortals with surprising accuracy, unrest can stem from conflicting faiths, tribes, or cultures.

Against this unruly setting, the main narratives unite when Nahri tries to cope with strong, con­flicted feelings: attraction to both Dara (the hand­some, ancient, near-mythical djinn who first saved her) and her new mentor, Prince Ali. I’ll leave you to discover that fascinating story for yourself.