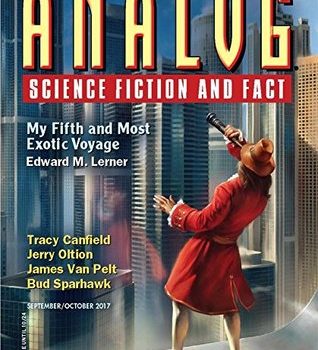 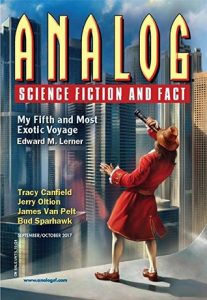 The most exciting short fiction news this month is surely the appearance in the September/October F&SF of a new story by Samuel R. Delany. Even better, “The Hermit of Houston” is exceptional work! It’s set some time in a strange future and is hard to get a grip on (the best kind). From one angle it seems a sort of pastoral utopia, from other angles utterly horrifying. It’s mostly about the narrator’s long-time lover, an older man named Cellibrex (sometimes), and about the hints he lets drop of some of the true nature of this future. There is extremely interesting treatment of gender, politics, law, custom, and memory – and I don’t get everything that’s going on in the story, in a good way. One of the stories of the year, I think.

There’s plenty more good stuff this issue. Lisa Mason‘s “Riddle” is a slickly executed horror story about a declining painter whose girlfriend has left him, and who meets another woman – or is she a woman? The title hints at what she re­ally is – and what she really does is pretty scary. Michael Swanwick‘s “Starlight Express” is really good far-future SF, set in Rome. Flaminio is a water carrier, and one day he sees a woman on the platform of the “starlight express”, which seems to be a way to travel to the stars, no lon­ger understood by humans. People sometimes travel through it, but it’s assumed that’s a way to suicide. No one comes back – except here is someone. Flaminio and this woman, Szette, spend much time together, and he learns her strange, sad story, and of course that time must end. An elegant and bittersweet, and wise piece.

Robert Reed‘s “Leash on a Man” is told by one Porous Mirth, a guard at a special high security prison. Mirth tells the story of a young woman named Constance, a prisoner who lived on an artificial habitat in space (a Crystal), and who destroyed it, killing all her fellow residents. The center of the story, though, is not the prison, nor Constance or her crime. It is the way humans are changing themselves in the future, repre­sented in particular by Mirth, who is to a great extent genetically a Neanderthal, and Constance, who, along with her fellow Crystals, is radically enhanced, both genetically and cybernetically. Reed, in his typical measured way, lets the implication of these human alterations settle in through the slant means of the story of a prison, a guard, a prisoner, and an escape attempt.

It’s not often that short-short stories show up in these columns, partly because they’re hard to describe without spoiling, and partly because while they’re often amusing, they are rarely particularly distinguished. But I was particularly struck, in the September-October Analog, by Lettie Prell‘s “Emergency Protocol“, which in six or seven hundred words presents a neat, plausible, and quite scary SFnal idea, involving the use of regular citizens in emergencies. Of the longer stories, Norman Spinrad‘s “The Sword of Damocles” is perhaps the best, about the Order of the Galactic Eye, a group of people genetically engineered to live their long lives on the Galactic Eye, an observatory aimed at detecting extrasolar civilizations. The protago­nist takes on a mission to move the Order from simply cataloging alien civilizations to trying to understand their sociology. One thing that seems clear is that while there are many such civiliza­tions, none travel to other stars… but what if one does? The story doesn’t quite come to a definitive conclusion, though it had plenty of nice ideas – I suspect Spinrad may revisit the Order.

I don’t think Scott Andrews regularly pairs sto­ries in a given issue of Beneath Ceaseless Skies by subject matter, but I noticed that both stories in the August 17 issue featured protagonists who protect their lords from poison, and who are also attuned to perfumes. That pair of skills is central to Kate Marshall‘s “Red Bark and Ambergris, which concerns Sarai, taken as a young girl from her home island because she has a remarkable skill with blending scent. She is destined to spend her entire life on the stark, isolated isle of the essence eaters, making per­fumes for the thrice-slain undying queen and her courtiers. The only escape is to become a poison tamer – to train oneself to survive most any poison, and thus became worthy of going to court to protect the queen. It’s ambiguous at first whether Sarai just wants to escape, or whether she want to take action against an unjust queen – for a poison tamer would have plenty of opportunity – but her true talent is with scents…. The story is very nicely told, and honest, and finds a way to a satisfying resolution that is true to Sarai’s established character. Benjanun Sriduangkaew‘s “No Pearls as Blue as These” is told by Bidaten, the household “bulwark” of Samonten Tangankaya, born human but bred to transform over time into a large and powerful sort of bodyguard. She can taste only poisons, to protect Samonten, and she has other defensive talents. Samonten has taken a bride, Yut, and as soon as she comes we sense an attraction between her and Bidaten. The consummation of this attraction, and Yut’s true motives, are very well displayed, and the central fantastical idea, the bulwarks, is fascinating indeed.

Lightspeed‘s October issue includes a longer than usual original story, Jeremiah Tolbert‘s novella “The Dragon of Dread Peak“. It’s a sequel to “The Cavern of the Screaming Eye”, which ap­peared in Lightspeed a year ago, and introduced narrator Ivan and his friends, who have formed a team to investigate “dungeonspace,” the various fantastical realms that can be reached from their home city. Their practice runs haven’t been going well since the events of the first story, and the team is in danger of falling apart. Ivan is still lying to his mother, who doesn’t want him to mess with d-space after his brother died there, and now there’s a new temptation: a desperate attempt to get some credit – and a chance to meet with someone who just might know something about his brother – by dealing with the Wizard Briggsby. But Briggsby wants them to steal from a dragon…. This is enjoyable stuff, and it looks likely to be a pretty good YA series of stories (or indeed a novel) in the making.

Tor.com opens September with a fine adventure story by Alex Wells, “Angel of the Blockade“. Nata is a starship pilot who makes money by smuggling. She’s also blind. Her latest contract sounds pretty simple, but things go south fast when she realizes the 2800 kilos of electronics she’s hauling is actual people – religious refugees who want to take her ship and run the Seventh Satrapy blockade. Nata doesn’t much like religion, or getting too involved in politics, liars, or people who threaten her, but she does have a conscience, which makes this a hard place for her to be. The general outline of the story is pretty familiar, and the resolution certainly doesn’t surprise, but the main character is interesting and story is well told.

In the September Clarkesworld, I particularly liked Suzanne Palmer‘s “The Secret Life of Bots“. 9 is a very old, not very specialized bot on a battered Ship trying to stop an alien attack on Earth. The bot is tasked to track down an “Incidental” that is caus­ing havoc, while the human crew and the newer bots keep things together for their hopeless battle. But number 9 shows a surprising amount of initiative – even, one might say, imagination – in dealing with the Incidental. Might that not be useful in dealing with the aliens? Or might bots have their own ideas about their own place? Fun stuff.