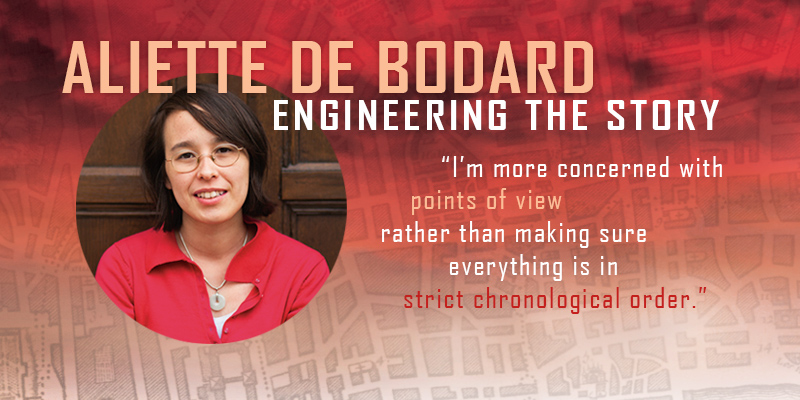 ALIETTE DE BODARD was born November 10, 1982 in New York City to a Vietnamese mother and a French father. At age one she moved with her family to Paris, France, where she has lived ever since, apart from two years in London as a teen­ager. She attended the École Polytechnique, graduating in 2002 with a degree in applied mathematics, electronics, and computer science. She speaks both French and Eng­lish fluently, and knows some Vietnamese, but writes her fic­tion in English.

De Bodard began publishing short fiction in 2006, and has since published many stories in publications including Clarkesworld, Asimov’s, Inter­zone, The Year’s Best Science Fiction, and many other magazines and anthologies. “Obsidian Shards” was a quarterly winner in the Writers of the Future competition (2007). “The Jaguar House, in Shadow” (2010) and novella On a Red Station, Drift­ing (2012) were both finalists for Hugo and Nebula Awards; “The Shipmaker” (2010) and “Three Cups of Grief, by Starlight” (2015) won British Science Fic­tion Association Awards; “Shipbirth” (2011) and “The Breath of War” (2014) were Nebula Award finalists; “Immersion” (2012) won a Nebula Award; and “The Waiting Stars” (2013) won a Nebula Award and was a Hugo finalist. Two of her stories were collected in Scattered Among Strange Worlds (2012).

Her first novel was Servant of the Underworld (2010), beginning the Aztec noir historical fantasy Blood and Obsidian series, which also includes Harbinger of the Storm (2011) and Master of the House of Darts (2011). The Dominion of the Fallen series began with BSFA Award winner House of Shattered Wings (2015) and continued with The House of Binding Thorns (2017). More books in the series are forthcoming.

She lives with her family in Paris.

“I haven’t finished the Dominion of the Fallen series. I’m contracted for two more books, and am working on book three on proposal. I can talk about how it sounds in my head, but that’s not me committing to anything. It’s still set in this Gothic Paris, and each book is focused on one House. The next book is about House Harrier, the snobbish house. They think all the fallen angels are hor­rendously superior to mortals, and therefore all mortals should be the servants. I was researching the roles of servants and the social conflicts and social relationships there. The next book should have some returning characters and some new characters.

“I am a very ‘organized’ writer. I really need to have an outline before I sit down to write a book. About half the time I devote to doing a lot of research and putting together a scene-by-scene outline, which is actually fairly detailed. Some of the outline might go fly­ing out the window, at which point, I will replot the outline. I like having the outline. Otherwise I find it difficult to maintain a whole narrative. It tends to go in all directions, and then I’m no longer in control of the word count or what’s happening with the book.

“When I write outlines I will do different colors for different characters, print it in full color, and then look to see if there’s too much green in one spot, and move that chapter elsewhere. It’s not a mathematical formula, I don’t have POV A then B then C strictly rotating, but when I was writing A House of Binding Thorns I ended up with entire successive chapters in the same character’s point of view. One of the things I do that my editors are not terribly fond of is to slightly adjust the timeline so two things that are on the page side by side are not, strictly speaking, happening at that same moment. There can be half a day between them. I’m more concerned with points of view rather than making sure everything is in strict chronological order. I don’t want the readers to get too comfortable with the same character, because then there’s the temptation to skip the other characters to get back to the bits that interest them. It’s the reader’s choice as to what they do with the book, but my duty as a writer is to say there are these other characters, and they do have points of view and things that happen to them, and it’s really nice to see that as well.

“I’m very lazy, and working as an engineer you realize it’s easy to fix things at the conception stage, but by the time the thing has gotten into production, you need to file a formal bug report, it has to be accepted by the client, and then you need to go through the entire cycle again. If you need to go through development again, and it’s very expensive, whereas you could fix it with two words at the conception stage. I always have that idea at the back of my mind when I’m writing. I’ve done extensive edits, and it’s not something I shy away from, but if I can spare myself that trouble, I definitely will.

“The research is something I definitely feel connected to. In book two I had a lot of the Western houses encroaching on the Vietnamese-based folklore. What I wanted to use as inspiration was what hap­pened in the 19th century, when the French started to make inroads into Vietnam, so I read books in particular on how that had affected the Imperial court. As the century went on, the court responded to increasing French interference in their affairs, first with trade but eventually with a full army. I didn’t finish the book. Reading about the colonization made me really upset. I was like, ‘Why do I have these really terrible ideas? Why do I keep doing this to myself?’ I thought drawing on that history was a good thing to do for the book, but not a good thing for me, necessarily. Most SF/F is from the US or UK perspective, so there’s a lot of history that doesn’t get touched on much. This is the right thing to do, but it doesn’t mean it’s easy. I read up to the beginning of the 20th century, and my duty was done. I could read on to find out what happens under French colonial rule, but I’d basically be hitting myself over the head. There’s a time when self care comes first, so I closed the book and put it back on the shelf.

“I am always very mindful that in French the word for history and story is the same word, it’s histoire, and you capitalize it or not depending on whether you’re talking about history or a simple story. It’s worth remembering especially when we’re talking about history – we are definitely getting into storytelling territory. With family history, that’s mostly clear to everyone: if you ask your aunt A why she fell out with your aunt B, they will almost certainly both give you a different account of what happened. The same thing applies to world history. There are areas where it’s not a matter of records. If we don’t have records, we only have oral histories. My grandparents were alive at the time of the French colonial empire. My mom was born, strictly speaking, under French colonial rule, though she prob­ably doesn’t remember much of it. We’re not talking about things that have been buried for centuries. That actually makes it worse, because it’s within living memory. Empires are really long-lived. We still speak Latin in some ways. Latin words are everywhere, and how long has it been since Rome fell? It’s more than language. Colonialism has shaped the recent history of countries. Look at food. Phở is probably a Chinese dish that got influenced by the French. Bo kho is a braised dish of beef with carrots and star anise. It looks a lot like boeuf bourguignon, which is also braised beef. If you put them side by side it’s very clear someone thought, ‘How can we make this dish with these local ingredients?’ We have pineapple duck. It’s orange duck in France, but oranges grow badly in tropical monsoon countries, so we used pineapple. It’s fascinating to see the influence. Colonialism really has an impact on all kinds of things. This is not the kind of stuff that should be buried. I’m also a bit of a contrarian I want to talk about the things few people are talking about. They may be painful memories, but we can’t keep burying things.” 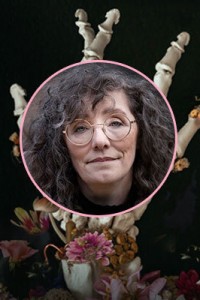