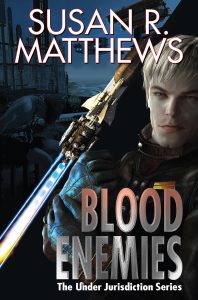 Susan R. Matthews’ Blood Enemies is the long-awaited conclusion to her Under Jurisdiction series. The first book in that series, An Exchange of Hostages, was first published in 1997. Until Baen recently republished previous volumes in the series as Fleet Inquisitor and Fleet Renegade, it was entirely out of print and there seemed to be little prospect of Matthews ever being able to tie up the threads left dangling in Warring States. Now we have Blood Enemies, a book which makes a solid attempt to give the series a satisfying end-point. In large part, it succeeds.

Andrej Kosciusko, former Fleet Inquisitor – that is to say, torturer – has spent the last year in Gonebeyond space, beyond the reach of the remains of the now-splintered Jurisdiction government. He’s working at an underfunded hospital, trying to escape from the oversight of its administrators (or security) so that he may reach his former security team, men he rescued from enslavement in the Fleet and sent away into Gonebeyond. He feels a powerful need to apologise to one of the men with them: Brachi Stildyne, who went after the security team to look after them because he loves and is loyal to Kosciusko.

As well as having been a Fleet Inquisitor – technically, Andrej still is one, since no one has revoked his commission – Andrej is also the inheriting prince of a wealthy and powerful family in his system of origin, the Dolgorukij Combine. One of his younger brothers (a disgraced one) has made common cause with an old and very racist Dolgorukij terrorist organisation, the Angel of Destruction, which has been operating in Gonebeyond. Said younger brother has invited Andrej to come and see the work he’s been doing to atone for his disgrace as a ploy to get Andrej in place to try to recruit him for the Angel of Destruction.

Meanwhile, Andrej’s Cousin Stoshi, a highly placed operative within the autonomous religious organisation that acts as the Dolgorukij secret service, has his own agents in place within the Angel of Destruction. He’s en route to try to get their information out, but his scheme relies on him posing as Andrej – and using Andrej’s former security team to reinforce his imposture. With two Andrej Kosciuskos in play, though, he is sure to be found out. Andrej himself will have to play his old, loathed role of Fleet Inquisitor to the hilt, if he’s going to keep his security and his cousin alive – and bring an end to the Angel of Destruction’s atrocities.

Blood Enemies tries to wrap up a number of continuing threads – Andrej’s struggle with his aptitude (and appetite) for inflicting pain and his complicated feelings towards his family and the duty he owes them; Andrej’s security team and their own complex loyalties and affections; Stoshi and the Malcontent; Karol Vogel’s role in Gonebeyond space; the not-quite-renegade Jurisdiction Fleet Ship Ragnarok and its crew and their relation to Andrej; Andrej’s legitimate son. It does reasonably well, although the sheer number of pieces means that some arrive at a more satisfying denouement than others. Matthews remains fundamentally interested in the problem of atrocity: the nature of bad bargains and complicity; the cost of self-knowledge and the price of atonement. She remains, too, interested in exploring the nature of honour and loyalty, of right action and indeed of love in situations where people are pulled in multiple different directions.

Matthews’s characters have always been the biggest draw of her books for me. I find Andrej Kosciusko perhaps a little more compelling than any torturer really ought to be, and the other characters that populate this series are equally interesting. Matthews’ language is well chosen, and Blood Enemies rattles along towards its conclusion with admirable tension despite its scattered threads. It’s really gratifying to finally see how it all turns out. 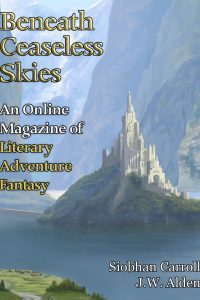