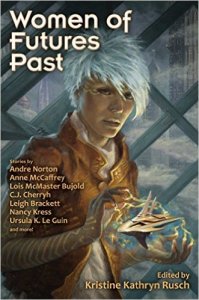 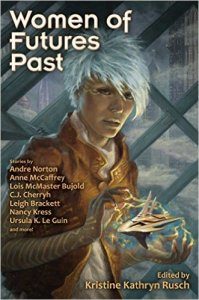 Kris Rusch is a busy and successful author. For her to doff her comfortable novelist’s cap and don the old green-celluloid editorial eyeshade that she wore so capably during her years editing, first, Pulphouse, and then F&SF, she must have an important mission in mind. And indeed she does. With this fine new anthology she is seeking to perform a number of important tasks simultaneously. She lays out her agenda in a long, articulate, impassioned introduction that would be worth the price of the book all on its own.

First, she is out to correct a demonstrably false narrative which states that for most of their existence the genres of science fiction and fantasy boasted very few female authors—and, at that, a weakling bunch who were mostly neglected, reviled and put-upon—prior to some miraculous, unprecedented flowering of women’s SF/F during the twenty-first century. Second, she is out to remedy the undeniable deficit that does demonstrably exist: that these prolific and capable women writers, having achieved print and popularity, were underrepresented in the reprint anthologies that built the canon. And third, she wants to show that limiting the scope and themes of what women SF writers can tackle, confining them in some kind of domestic corral, is both counterproductive and narrow-minded.

So, building on the work of two scholars who have dealt with these topics—Eric Leif Davin and Justine Larbalestier—as well as employing her own immense familiarity with the field, while also giving due acknowledgement to milestone works by earlier editors like Pamela Sargent, Rusch lays out chapter and verse of how women writers thrived in the field and significantly advanced it prior to the year 2000, and yet were denied due recognition, while also being stereotyped as to range and abilities.

Such historical nescience and/or revisionism is detrimental both to our true consensus understanding of the field, and hurtful to the memories and reputations of the individual authors involved. Any dismantling of such a shoddy superstructure of misconceptions will reveal the solid foundations beneath, and that’s precisely what Rusch’s selection of fine stories achieves.

We open with Zenna Henderson’s “The Indelible Kind,” one of her tales of “the People.” I read this myself in its first zine appearance in 1968, and it’s stayed with me ever since. Not many tales can do that. Henderson’s non-sappy humanism blends quotidian matters with cosmic ones in a perfect ratio.

Anne McCaffrey’s “The Smallest Dragonboy” is set in her Pern universe and reminds me—this is a real compliment—of Rankin and Bass’s Rudolph the Red-nosed Reindeer. Certain roots of Naomi Novik’s Temeraire series are apparent.

“Out of All Them Bright Stars” by Nancy Kress retains the power that won the author a Nebula for this. The almost vignette-like precision of this tale of alien-human interaction harks back to some of Michael Bishop’s pioneering work in this area.

Pat Cadigan delivers surreal and nighted cyberpunk bravura in “Angel,” where the confused, hurting, yet plucky voice of the narrator is so important. Then comes C. J. Cherryh with “Cassandra,” which strikes me as a kind of lost Harlan Ellison script for a consummate Outer Limits episode.

Maybe it’s my own prejudice and reading history, but I can’t really deem C. L. Moore’s “Shambleau” as a forgotten masterpiece. Masterpiece, yes, but it’s always been utterly central and honored in my gestalt of SF. But whether it’s forgotten or revered, it belongs here. Please note Lavie Tidhar’s homage to the tale if you read his Central Station.

In “The Last Days of Shandakor,” Leigh Brackett blends Robert E. Howard primalness with the faerie exoticism of Lord Dunsany in a tale about a dying race and city on “Old Mars.” Her refusal to contrive a happy ending for her protagonist or the inhabitants of Shandakor, while demonstrating that life still goes on despite tragedies, is typical of her depth of sensibility.

In “All Cats Are Gray,” Andre Norton weaves a swift-moving interstellar adventure with an unconventionally “drab” heroine at its center. The happy ending somehow reminds me of Nick and Nora Charles from The Thin Man.

Ursula K. Le Guin’s “Sur” is a stirring counterfactual first-person narrative about an unheralded all-woman polar expedition during the early part of the twentieth century. The difficulties are not diminished, nor are the victories and camaraderie slighted. I find one quote from the tale almost emblematic of this whole collection, revealing perhaps any special female slant on the field: “The backside of heroism is often rather sad; women and servants know that. They know also that the heroism may be no less real for that. But achievement is smaller than men think. What is large is the sky, the earth, the sea, the soul.”

We round out the book with Connie Willis and her award-winning “Fire Watch,” about a time-traveler serving a stint during the Blitz of London. Has anyone ever remarked before that this series by Willis is, among many other things, a droll critique of academia, wherein grad students can be justifiably killed?

This book needs to be slotted onto your shelves amongst all the other seminal anthologies that seek to limn the greatness of our field. Its judiciously and intelligently selected table of contents both entertains and instructs. Rusch has done important, masterful work here, and redressed a huge esthetic and moral imbalance. 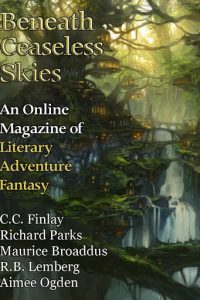 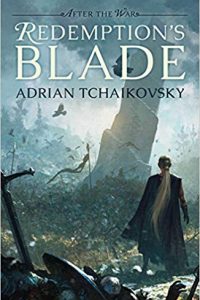