Worldcon in Helsinki, the 75th World Science Fiction Convention, will include a special trial Hugo Award category for Best Series:

Fans voted in August 2016 to trial a new Hugo award for “Best Series”, which could be added in 2018. Each Worldcon Committee has the authority to introduce a special category Hugo award, and Worldcon 75 has decided to test “Best Series” in 2017. This follows the precedent of the 2009 Worldcon, which trialled “Best Graphic Story” before it became a regular Hugo the following year. Fans at Worldcon 75 will be able to decide whether to ratify the “Best Series” for future years and suggest revisions to the award definition at the World Science Fiction Society Business Meeting held in Helsinki during the convention.

For eligibility, a series is defined as “a multi-volume science fiction or fantasy story, unified by elements such as plot, characters, setting, and presentation, which has appeared in at least three volumes consisting of a total of at least 240,000 words by the close of the calendar year 2016, at least one volume of which was published in 2016.” 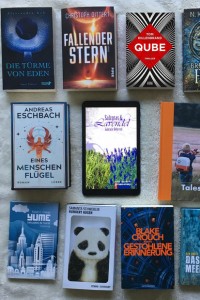