When I started writing, I thought I was talented. I was six, and I’d written something precocious that attracted praise from the grownups around me, and that praise included a descriptive dimension: I hadn’t just written something that was good – I was a good writer.

Talent is a destructive myth. To call someone talented is to imply that their abilities are intrinsic. Having written and taught for decades now, I’ve satisfied myself that the improvement of a person’s art isn’t drawn from the mystical well of their soul: it’s generated by practice.

Practicing isn’t always hard. At times, practice is joyous. When you are working at the edge of your abilities, acquiring mastery of something difficult that you value, practice is the best feeling. But if you only practice when it brings you joy, you won’t practice much. Logging the requisite hours inevitably involves some slogging.

The psychologist Mihaly Csikszentmi­halyi (‘‘Me-high Chick-sent-me-high’’) is a leading authority on learning, practice and motivation. It was in his work that I encountered the idea that ‘‘ability’’ wasn’t made of some in-built talent, but repre­sented continuous reflection, feedback and refinement, over a series of attempts to master your art.

A belief in your own talent can be a powerful motivator. After getting all that praise, I wrote more, and was praised anew. So long as writing was fun (and it often was, and still is), I kept at it. When it grew choresome, I stopped. This is entirely consistent with the literature. One ingenious experiment divided high-performing students into two groups: the first was comprised of children who believed that their academic suc­cess was the result of practice; the other believed that their talent had taken them far. Both groups were given a test that was harder than they could possibly complete.

The ‘‘practice’’ students worked at their tests for much longer than the ‘‘talent’’ kids, who gave up quickly and were dispirited afterwards. After all, if you owe it all to talent, then when talent fails, there’s nothing to do except for wait for the fates to add more talent to your capacity. The ‘‘practice’’ group kept plugging. When they were done, they were of good spirits. If your ability comes from practice and you are assigned a task that is beyond it, then you just need to practice some more.

The best piece of writing advice I ever ignored was to write every day. Boy, did I ignore this advice. I heard it dozens of times, from writers I admired, but I didn’t start doing it until I got to my second or third novel. Writing every day is fantastic, because it habituates you to writing. Habits are things you get for free. As anyone who’s raised a child knows, there are a lot of boring things that we don’t notice because they’re such deep-grained habits that they happen as if by magic. I brush my teeth without having to think about it. My seven year old daughter practically needs to be arm-twisted to clean her teeth.

For years, I’ve been a repentant daily writing sinner, telling anyone who’ll listen to ‘‘write every day, until it becomes a habit, because habits are things you get for free.’’ It’s worked for me: despite a busy professional life involving a lot of activist work, freelance assignments, and several side-businesses, I have written or co-written about 20 books since 2000. I’m no Charlie Stross, but I’m hardly Harper Lee, either. When I have a book to write, I pick a schedule and a word-count – 1,000 words a day, five days a week, for six months, say – and get to it. There’s rewriting at the end of course – reading the book aloud to find infelicities in the language, ‘‘structural’’ rewrites to meet my editor’s requests, and fixing stuff the copyeditor, first readers, and proofers find.

Now I’ve had a revelation about prac­tice – practicing the kind of writing you’re good at can make you better at it, but practicing the stuff you’re bad at is even better.

About two years ago, we changed the layout for Boing Boing, the website I co-own and post to several times every day. The change gets more good stuff onto the front page, and lets the substantive pieces hang around longer without being pushed down by slight things.

The new layout means each story gets a brief teaser sentence – the lede – and a short headline, which has to be short enough to tweet with room left over for an image embed and a URL.

I hated this. I’d been used to assuming that readers would get five or ten times more text on the front page to help them decide whether to click through to the rest. Writing shorter – much shorter – meant that something crucial was left out.

But you get better at anything you do, especially if you get feedback. We get lots of feedback on Boing Boing, from comments, to analytics, to social media responses. Two years of writing 10-20 very short ledes daily, along with regular Twitter use, imbued me with a smooth facility for brevity that I find delightful and horrifying.

In January 2015, I finished the first draft of Utopia, an epic novel for adults, which ran to more than 220,000 words (!). After conferring with my agent, I agreed that I would shorten the book to 150,000 words. I sat down to re-read it, and as I did, noticed redundancies in the language. They leapt off the page. As an experiment, I took the first 5,000 words of the book and spent 45 minutes trimming them. When I was done, I did a word-count and discovered that I was down to 4,100 words.

Cutting like this has made me a better writer, too: I catch myself when I’m about to write the prototypical excesses I’m finding in my prose, eradicate them before they’re even set down. I haven’t had a hint of ‘‘cen­tipede’s dilemma’’ from this (‘‘how do you walk with all those legs?’’ ‘‘I never thought about it’’ – and the centipede never walked again).

But it’s vindicating. It also makes me understand why authors itch to release ‘‘preferred texts’’ of their novels decades later.

My experience contrasts with the moral panic over the decline in writ­ing standards due to the Internet. Those who wring their hands at the informality and vernacular of instant messaging and social media prose have missed the point: when we practice writing short, for an audience, as a kind of performance, it makes us better writers.

From the May 2015 issue of Locus Magazine 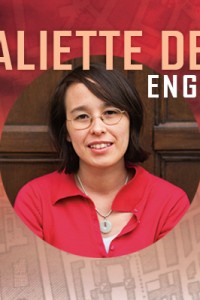