As is our wont, we follow deep discussions of non-fiction, poetry, and music with… a giraffe? Somewhere, on some level, this makes sense. Honest. John Clute, Guy Gavriel Kay, Michael Dirda, Stefan Dziemianowicz, Cecelia Holland, Cat Rambo, and Peter Straub all pile on.

I agree with Guy entirely, and he’s just in time. I was about to tell everyone exactly how I make use of my six foot wooden giraffe whenever I worry about writer’s block, and I begin to realize it’s probably something unique to me. But anyone who does almost anything at all with their giraffe, I’d like to know about it. Off-list.

You know, given that Locus has some innocent young readers (and Liza), that IS probably best done off list, John.

Your giraffe is only six-feet tall? I wouldn’t thought that anywhere near enough.

I don’t know. If your giraffe remains at 6 feet for more than 4 hrs, maybe you should call a Dr.

It’s not the size of the giraffe that matters so much as how you use it.

I feel much better now. 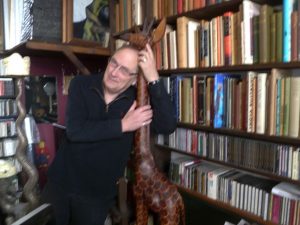 Sometimes, when the critic demystifies a metaphor, all the fun is lost.

As to critics and demystifying…

The Clutean giraffe? A metaphor?
Too nakedly parsed, as in semaphore?
The writers assembled
Grew pale and trembled –
Knowing a Wolfe might appear at the door!

Too bad, Stefan. Maybe the joke was that in fantastika all metaphor is fog. Did anyone mention Edmund Wilson? I think Clive James was mentioned, but only Cultural Amnesia, which needs to be read one section at a time; his early reviews always helped me get on with the job, because they told me it was possible to be funnier than I could manage, and that jokes were a way of telling the truth, hey.

On the other hand:

A normally placid John Clute
When blocked was entirely a brute.
He would pound his … giraffe
Then hysterically laugh,
And at last try a software reboot.

I don’t know about the rest of you, but this conversation is making me want to own a six-foot giraffe AND be blocked as a writer, just to see what all the hullaballoo is about.

The unrhymable critic, stefan
Devised an intricate plan.
He’d STEAL Clute’s giraffe,
Cut it in half,
And SEE how Kay’d make that beast scan!

(working fast, indulgence and amusement craved, pitchforks to be checked at the door)

Guy, step away from the giraffe. That’s a good boy.

I don’t know if I would read Guy’s shaggy doggerel the same way I would read other poets mentioned in this discussion for reference or inspiration–but I would definitely read it to laugh out loud in my office, as I’ve done several times today.