Sandra Tayler is an author of short fiction, mother of four, blogger, and co-manager of the business that puts out the Hugo-nominated web comic Schlock Mercenary.

The book was red and yellow, not just on the cover, but the pages were yellow too. It was not a typical reading choice for me. At 10 years old, I liked books about magic and this one had a pair of kids in space suits on the cover. Lost Race of Mars, proclaimed the title. I was at my grandma’s house, it was too hot to play outside, and there wasn’t much else to read except antique magazines about antiques. Perhaps this book would be okay. I liked watching Star Trek, it had space ships and aliens too. So I cracked open the pages and joined Jim and Sally Chambers in their move to live on a Mars colony. Robert Silverberg wrote Lost Race of Mars in the years leading up to the first moon launches. He imagined a future with space colonies and described it to kids in a way that focused on those matters which are most important to kids, like having to leave your friends and pets behind, but then finding new alien friends and pets on Mars. I first read the book only a few years after the space shuttle Columbia blasted out into orbit. I too lived in an era where Mars colonies seemed an obvious part of the future.

Decades later I sat with my six year old son watching Firefly. The show was a little scarier than what I’d shown him before, but I wanted to share my love of science fiction with him. I wanted him to feel the same wonder and joy I felt when reading books which attempted to answer the question “what if.” There were few science fiction books aimed at his age group. I was left with movies and video games. My little boy was tense, completely involved in the drama of the show, so I paused the show to explain how it was all pretend.

He turned wide eyes to me in disbelief and said “You mean space ships aren’t real?” It was like I had stolen Christmas. I explained to him that yes we did have space ships, but that they didn’t look like the ones in the movies. So we googled space shuttles, the International Space Station, and the Russian space program. A few days later we gathered all four of my kids and took a trip to an air and space museum where my children stared with wide-mouthed wonder at WWII bomber planes and exhibits explaining aerodynamics. I realized then a possible reason for the dearth of science fiction books for kids younger than teens. They don’t need science fiction to take them to fantastic futures when the world of non-fiction is so filled with wonder. We swung by the library on the way home and grabbed a pile of books from the kids non-fiction section.

Among that pile were some Magic School Bus books. These books were based on the television show in which a crazy teacher loads her classroom full of kids into her magic school bus to go on a field trip to learn about science. Sometimes they traveled in time, others they shrunk to microscopic proportions, still others they learned the physics of magnets. The series wrapped fiction around the science in a way to make clear which was which. It was perfect. The kids read every page and asked for more. We expanded to reading and watching other things with hidden, or not so hidden, science content. Shows like How It’s Made and Mythbusters were frequently re-watched favorites, as were a variety of nature programs. Through these mediums my children learned science concepts and loved
them.

Yet two years after that day with my son, I find that I still lament the fact that my kids do not have literature which teaches them to dream of space exploration in the way that I did. There is a dearth of moon colonies and friendly robots in books for younger readers. I am forced to delve into the collection from my childhood and share with my children. That copy of Lost Race of Mars came home with me from my grandma’s house. It is time for me to dust it off and read it with my kids. After that we’ll dive into The Norby Chronicles by Janet and Isaac Asimov. The retirement of the space shuttle program means that my children will not get to wake early and watch rockets fly on live television, as I did. But perhaps they can be part of a generation that dreams about space and launches us all into a grand new venture. So I will feed mixed-up robots and Mars cats into my children’s imaginations, then see how far we fly. 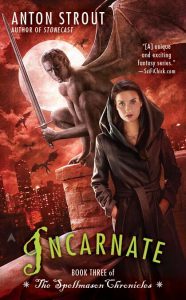