The few times I’ve been nominated for a major award, I’ve never won. And though I try to act as though I don’t care and am above it all, I’m human enough that I’ve played the Monday-morning-quarterbacking game of trying to figure out WHY I didn’t win. In the various vague categories where I’ve been nominated–Best Non-Fiction, Best Non-Professional, etc.–the breadth of territory spanned by the other nominees is so vast that I’ve had the consolation of believing, “Wow, it’s all apples and oranges. My book is a Winesap, but this year’s judges were clearly looking for a blood orange.” It has definitely helped me to appreciate the hard-to-pigeonhole diversity of what our field(s) produce(s) each year.

I’m curious to know if the fiction writers in our group feel the same way. If you don’t get the award for Best Novel, or Best Short Story, or Best Novel, are you able to look at the other nominees and wonder how the judges could even make an informed decision about five or six fictions so varied and diverse that about all they have in common is their word count?

Hey, I love awards too — or I wouldn’t have spent several thousand hours over the past decade building and maintaining the Locus Index to SF Awards. The awards lists of the ’60s and early ’70s made a deep impression on me as I came of reading age and discovered new writers and formed opinions about who were the cutting edge authors of the day, and I can still more accurately recall the finalists for the Hugos and Nebulas of, say, 1972, than I can those of 2002.

At the same time, I hold no illusions about ‘accuracy’ of awards in terms of what works are later regarded as important and lasting by the SF community, and from the beginning of the Locus Index to SF Awards, I’ve had a set of essays about what awards do and don’t mean, in particular Influences, Or, 22 Reasons Why Your Favorite Book/Author Didn’t Win (and Someone Else Did). Other influences have occurred to me over the years… recently thinking about Lucius Shepard. As prolific, nearly, as ever, but he got lots of award nominations early in his career, and not so many recently. (Well.. now that I check, I see that he has won four awards in the past six years – but not Hugos or Nebulas.) Anyway, the general principle is one of author/audience fatigue; awards tend to recognize novelty — new writers, new talent, new types of fiction. It takes a prominent career, lots of author exposure at conventions, and so on, to maintain award attention. (Think Neil Gaiman, Connie Willis.)

Anyway, with all this in mind, and as I’ve long alluded, I’m currently building a replacement website for the Locus Index to SF Awards, which will place awards data in context with much other data, and show why, for instance, “Day Million”, despite not having been even nominated for anything, is nevertheless one of the top ten or twenty short stories in all of SF.

I find it hard not to do the same thing, Stefan, both before and after the awards, replaying everything in the same way that I used to replay blind dates in high school.  But I find myself equally baffled, though maybe a little more graciously so, when I win as when I lose, particularly when there’s another book in the category that I really admire (there’s usually at least one and often more).  I do agree with what a lot of people are saying:  the thing I like most when nominations are announced, whether I’m in them or not, is the work that it makes me aware of or reminds me about.  Sure, the work in a given category is varied and sometimes it’s hard to know how apples and oranges can be compared, but I love the way that the best nominations by the most thoughtful judges give me a clearer view of the field than I had before.

Stefan:  I’d think it would be difficult to figure in the award catagory you find yourself in from time to time because there is such a wide range of material.  In my experience, the ones I’ve lost, it was pretty clear as to why the works that won did — fiction by Graham Joyce, Kij Johnson, Mary Rickert, Neil Gaiman, Greer Gillman, etc.  Terrific work by terrific writers. Not much need for pondering. 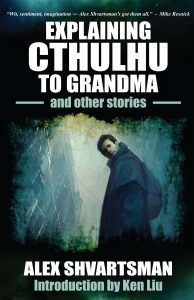