I don’t get to reread much anymore. But every once in a while, a reprint crosses my desk that I can’t resist. Heinlein’s The Moon is a Harsh Mistress (Gollancz) which I read in 1966 when it came out and probably reread in the ’70s when I still had time, was one. Heinlein’s reputation, since his death in 1988, has gone downhill somewhat, with objections to his women characters, his politics, his arrogance, and that his books are more or less dated. Probably true of all authors who wrote mid-century. It’s easier to find fault then see what’s still good about them.

I loved rereading Moon… and think it may very well be his best book. Why John W. Campbell rejected it I’ll never understand. The plotting is tight, the lead characters, including the computer, interesting, and the voice – the voice! Marvelous. Yes, the lead female character Wyoming Knott isn’t very smart (Hazel Meade at 10 who goes on to be a leading character in The Rolling Stones is more interesting), the Heinlein character, Prof. de la Paz is arrogant and spouts both ideas and nonsense. He isn’t reactionary, but a strange mixture of Marxism and libertarianism. Here’s Heinlein playing jujitsu. The villains are North American corporations. The colonists are transportees a la Australia, their language and customs are mostly Russian! The historical background is the American Revolution. Heinlein is excellent at ratcheting up the tension to a fine ending. I’ll see if some of the others hold up as well. 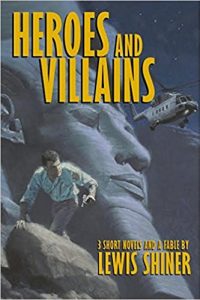 July 11, 2017 admin Comments Off on OMNI Returns to Penthouse

3 thoughts on “The Moon Is a Harsh Mistress”

I started writing Barsk: The Elephants’ Graveyard late in 1989. I’d been writing short stories for a while, but hadn’t sold any. I’d recently completed my doctorate in cognitive psychology and was teaching at a small, liberal arts college in Sarasota, Florida, and to this day, more than twenty-five years later, I really can’t say what made me decide to write a novel. But I did. And it was horrible.