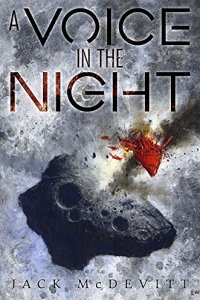 With nearly two dozen novels published, Jack McDevitt is one of those writers whose sturdy and engaging presence in the territory of long-form fiction definitely overshadows his stature at shorter lengths. But since his first story sale in 1981–nigh unto forty years ago, impossible as that seems!–he has accumulated, by ISFDB’s catalog, over one hundred tales, enough to furnish out four previous collections. His newest assemblage, A Voice in the Night, reaches back to 1986 for one entry, but predominantly features publications from very recent years, showcasing McDevitt’s mature talents in this narrative range.

In their themes and novums, these tales diversely inhabit almost the whole breadth of modern SF, but share certain qualities. They are all upbeat without being Pollyanna-ish; respectful of the rigors of solid science without being close-minded or unimaginative; and told in old-school, straightforward linear fashion, a kind of Ur-narrative that never really loses its punch or utility. Lively yet not without gravitas and poetry, these stories embody the core values of SF.

“Searching for Oz” is the first of several counterfactual ventures, a mode that McDevitt plainly loves. Here the famed SETI trials of Frank Drake in the Sixties diverge ecstatically from the reality we know, satisfying all dreams. Told mainly in dialogue form, the giddy “The Law of Gravity Isn’t Working on Rainbow Bridge” is a kind of world-turned-upside-down interlude that makes the reader realize how unstable the cosmos is.

Another alternate history intrigues us in “The Adventure of the Southsea Trunk,” wherein the originator of the fabled Sherlock Holmes is one Christopher McBride, citizen of the late twentieth century. In “Combinations,” McDevitt focuses on artificial intelligence, another passion of his, and brings us the silicon version of historical chess whiz Paul Morphy. (An allied tale is “The Play’s the Thing,” involving Shakespeare instead.) A distinct autumnal perfume of Bradburian whimsy infiltrates “It’s a Long Way to Alpha Centauri,” as we follow a man who wishes to flee to the stars–or does he? Two high-grade AIs are at the center of “Lucy,” a tale of lost spaceships and bureaucratic timidity. “Listen Up, Nitwits,” is a worthy, less solemn companion to The Day the Earth Stood Still, and feels like it might have been written by Fredric Brown.

Xmas on an alien world is invoked in “Midnight Clear,” when a young woman decides that Capella III needs more holiday spirit. Counterfactuality resurfaces in “The Lost Equation,” the saga of a poor overlooked genius who beat Einstein to the draw. “Blood Will Tell,” co-written with Tom Easton, is a snappy time-travel vignette, just long enough. If Hal Clement were still around, he’d praise the suspenseful and ingenious “Blinker” as a problem-solving tale after his own heart. A moonquake leaves two people isolated, with only their wits to save them. The deliciously irreverent “Friends in High Places” shows us Jesus on an alternate timeline, while “Maiden Voyage” is the first of two adventures involving McDevitt’s well-known heroine Priscilla Hutchins, who was introduced in The Engines of God (1994). She’s young and learning here, as she also is in “Waiting at the Altar.”

Ferrying alien “books” across the stars is the duty of the ship and crew in “Oculus,” and their mission is not made any easier by sabotage. Former editor of Analog Stanley Schmidt teams up with McDevitt on “Good Intentions,” showing us an archaeological mission on Mars that turns up something very ancient–and alive. Another round of speculation on balky artificial intelligences infuses “Molly’s Kids,” while “Ships in the Night” is a quiet, melancholy contemporary love story that might have sprung from the pen of Robert Nathan or Heinlein in his moments when he composed “Our Fair City.”

Fermi’s Paradox is addressed with verve and compassion in “The Pegasus Project.” The inevitably fatal way to motivate humanity out of its torpor–much as Heinlein’s D. D. Harriman knew–is manifested in “Cathedral.” A particular slant of AI–the recreation of a dead human as a silicon avatar–forms the substance of the tragic “The Last Dance.” You might call the conspiracy-minded “Excalibur” the “Secret History of the Space Age.” And finally, we visit with that sensitive forager for treasures, Alex Benedict (A Talent for War birthed him) in “A Voice in the Night.”

Taken en masse, these stories provide the kind of nourishing meat-and-potatoes fare that once sustained generations of bright, questing SF readers. Yet they are not retro, but fully cognizant of twenty-first-century matters and attitudes. They feature protagonists who are generally doers, makers, strivers. They limn victories and setbacks alike in humanity’s progress. They are playful with plentiful ideas. Aside from the other writers I’ve mentioned, you might invoke Harry Harrison, Raymond F. Jones, James Schmitz, and Gordon Dickson as McDevitt’s stablemates.

And yet these tales are not bland and generic, but studded with moments of whimsy and catharsis. Maybe the best way to end my assessment of McDevitt’s virtues is to invoke one of my favorite writers, Clifford D. Simak. McDevitt echoes him in this passage, for instance:

A high triple doorway anchored the balcony, but, in the unsymmetrical style of the Capellans, it was well to the right of center. The doors and windows all gaped at her now black and exposed. There had once been glass.

And music? Had these people known music? What would it have sounded like? How sad to think that, whatever it might have been, it was gone now, lost forever.

Yet the Aerie did not feel like a dead place. The way cemeteries felt, for example. Or the Antiqua, the alien starship orbiting Deneb, its origin unknown, its mummified crew still at their station. No: maybe the Capellans were so long gone that no part of them remained, and so this was only a pile of rock and plastic. Or maybe this place had thoroughly served its purpose, and its builders had lived their lives and moved on and nothing more could he expected.

She smiled, It was spooky up here. Hard not to keep her eyes on the silent openings, not to suspect that the moment she turned away, there would be movement inside.

This sense-of-wonder shiver, this frisson of the unknown and unfathomable–that’s what SF used to consider its main business, and what McDevitt still pursues and captures. 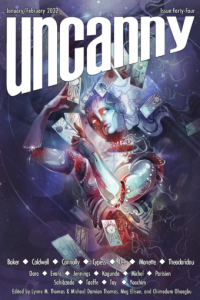