On the hardcover list, Morning Star by Pierce Brown (book three and the conclusion of the Red Rising trilogy) claimed the top position, closely followed by the latest book in Lois McMaster Bujold’s Vorkosigan series, Gentleman Jole and the Red Queen. The new runner-up was Bigfootloose and Finn Fancy Free by Randy Henderson (Tor). We had 45 titles nominated, the same number as last month.

For the fifth month in a row, The Martian by Andy Weir retained the top spot on the paperback list. Longtime fan favorite Patrick Rothfuss’s The Name of the Wind took second place. The Brimstone Deception by Lisa Shearin, the second book of her SPI Files series, was the new runner-up. There were 63 nominated titles, down from last month’s 66.

On the trade paperback list, A Darker Shade of Magic by V.E. Schwab nabbed the top spot and relegated Andy Weir’s The Martian to second. There were no new runners-up. There were 36 nominated titles, equaling last month’s numbers.

In media-related books, Paul S. Kemp’s Star Wars: Lords of the Sith took first place, followed by a tie in second place between the Star Wars movie novelization, Star Wars: The Force Awakens by Alan Dean Foster, and Star Trek Voyager: A Pocket Full of Lies by Kirsten Beyer. There were no new runners-up. There were 15 nominated titles, down from the 17 titles nominated last month.

In gaming-related books, none of the nominees received enough votes to make our list. There were 21 nominated titles, up from last month’s 11.

From the May 2016 issue of Locus Magazine 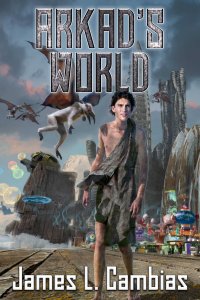 “Nice try, but she should go read Tom Clancy to see how it’s done.” That was a review on my first novel, Aurora: Darwin. I remember being a little stumped by this at the time because I hadn’t been trying to emulate Tom Clancy at all. I’ve never actually read any of his books, and as far as I’m aware he doesn’t write science fiction…. Perhaps it was the military