Twenty years ago, already working for Locus as the magazine’s monthly short-fiction reviewer since 1988, I volunteered to Charles N. Brown to set up a Locus website. It was the early days of the web and it was becoming fashionable, even necessary, for any kind of institution or publication to have an online presence. Not coincidentally, I volunteered for a similar task at my workplace, an engineering firm that built the Space Shuttle Main Engines among other things, to create an internal website for my department, and so was able to learn HTML on company time and then apply it in my spare time to building a Locus site. (In the following years I used a similar tactic to learn how to build databases in Microsoft Access, and then to generate webpages from them, which led to my SF awards sites.)

From the beginning this site’s mission has been to post samples of content from Locus Magazine, as enticements to attract new subscribers, and to post supplemental material special to the site, as bonuses for regular readers. I also recognized early on that there were three principal ways websites have advantages over print publications: they can post content in a timely manner and update continuously (rather than publishing periodic ‘issues’); they can accumulate content (like indexes) on static pages without having to issue periodic print volume updates; and they can link to other sites and posts on other sites to allow access to information without posting such information themselves. I think the site has successfully exploited all three advantages, over the past two decades.

Here’s a timeline of significant developments, and featured posts, over those 20 years. Note that any posts older than 2009 display earlier designs of the site (and early pages were very narrow by current standards!). Below the featured posts is a gallery of homepage captures, showing the development of the site’s design since the beginning.

6 March 2011: Philip K., Diminished: A Review of The Adjustment Bureau

The operatives of Hollywood’s Adjustment Bureau had gathered to map out strategies for their latest assignment: given this quirky little story by Philip K. Dick, “Adjustment Team” (1954), how could they “adjust” its plot to transform it into a crowd-pleasing blockbuster?

23 Feb 2009: Pitfalls of Prophecy: Why Science Fiction So Often Fails to Predict the Future

As a person regarded in some circles as an expert on science fiction, I was once asked to give a presentation offering some predictions about the future; science fiction writers routinely face the same request.

As publicity about the condition has increased in recent years, I have gradually come to the conclusion that I have suffered all my life from an undiagnosed case of Asperger’s Syndrome — although, as will be explained, I don’t think that “suffered” is the proper term.

22 Apr 2012: review of Samuel R. Delany’s Through the Valley of the Nest of Spiders

Samuel R. “Chip” Delany wants to push your buttons—I mean that in a good way—and really knows how to do so in the most esthetically magnificent, narratologically adroit, intellectually rich, and filthily transgressive fashion.

How can a reviewer possibly say something fresh and illuminating about a writer of Ursula K. Le Guin’s immense stature, at this epochal moment in her career?

But it is one of the most original, complex, and interesting SF films to come out of Hollywood in a long time, and it may very well be the most overlooked SF film of the last decade.

Both: All year we’ve been complaining about the movies we’ve been reviewing here. We told you we’d let you know when Locus finally sent us to a good film. And now, in recompense for our suffering, we get to review The Prestige. But in a way we’re still waiting, because The Prestige is not a good film.

The Prestige is a great film.

This time I feature a science fiction anthology and recommend the John Barnes story as one of the year’s best. Also a couple of first-of-the-month publications.

Featuring a really fine issue of F&SF, with the Good Story Award to Andy Duncan. The current issue of Shimmer is also particularly worth reading.

Inspired by a patio conversation with Charles N. Brown and others at ICFA, the International Conference on the Fantastic in the Arts held every year in Florida, in 2000, Locus Online posted April 1st humor pieces for many years, usually using anagrammed versions of their contributors’ names.

(The site’s Index to Contributors includes all the April 1st humor pieces, indexed under actual names of authors.)

Here is a selection of homepage captures from the past two decades, as the design of Locus Online has changed, reflecting the changes in design standards across the web: e.g. as screen resolutions increased, sites got wider; layouts settled on reverse-chronological order of new posts; page designs became unified through stylesheets; graphics became more important. Over the years I looked to professional sites like CNN and Slate for design cues. For the first decade every page on the site was composed manually. In 2008 we began using first Blogger, and then WordPress, to host portions of the site, beginning with the News, though the homepage is still edited manually, in part, to this day.

The earliest homepage used basic HTML tables with resizeable color graphics to mimic the front cover of the magazine, which in 1997 always had a big red border (like Time Magazine); the width was 600 pixels. 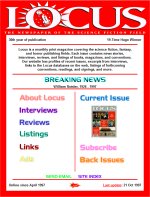 By 1999 the site established its own logo (font: Souvienne), subtitle (“News, Reviews…”), and a three-column layout with colored headers, rather cluttered text, and surrounded by a thin curved-corner border, at just 585 pixels wide. Within a few months this was cleaned up a bit with a single main section separate by tab-like colored headers. (Length of screen captures varies depending on content at the time.)

The first expansion of the site, to 750 pixels wide, came in 2001, allowing a left sidebar for cumulative links. This is what the site looked like in the year for which it won the Hugo Award. 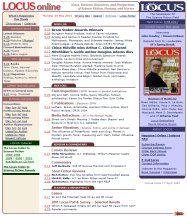 By 2004 the homepage went to a strict, reverse-chronological order for main posts down the center. A new tiny spaceship icon was placed at the bottom right. Then by 2005 the width crept out to 800 pixels, drop-down menus were established along the top, and the colors changed from the tan and lavender scheme to the blue/green and lavendar scheme similar to what’s still in use.

In 2008 the width jumped to the current 980 pixels, allowing for the logo, and two standard-sized banner ads, across the top. 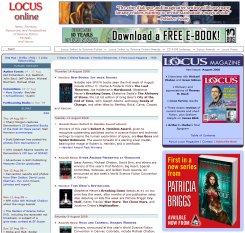 In December 2008 the Locus Magazine staff took over the posting of news on the site, via Blogger, and the homepage was rearranged to highlight the latest news posts in a box at the top of the central column. (While a different set of drop-down menus was located below the logo in upper left.) In this May 2009 capture, the banner ads have been removed. 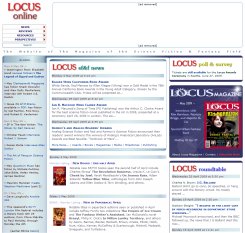 In 2009 and 2010 the News blog migrated from Blogger to WordPress, and the other main sections of the site — Reviews, Monitor, Perspectives — were set up in matching blogs. (The manually created design of the homepage was applied to the WordPress blogs, with appropriate variations; no pre-designed WordPress templates have ever been used.) By June 2010 the current homepage design was established, with gradiant colors behind both left and right sidebars, thinner end-caps and separators, the main central column reduced so that all three sections are of roughly equal width, and a new set of horizontal drop-down menu bars. 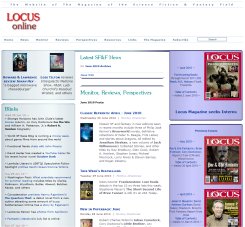 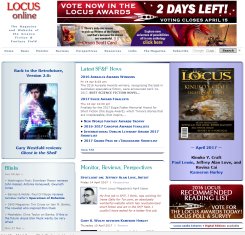