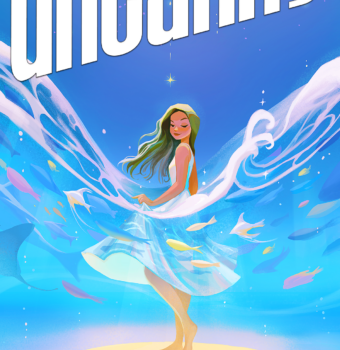 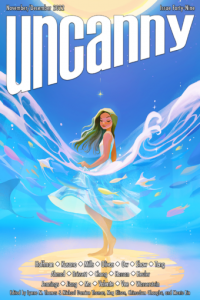 Tor.com’s Fall offerings are all good, but I liked some better than others. PH Lee offers a clever tribute to Stanislaw Lem’s The Cyberiad series with “How the Crown Prince of Jupiter Undid the Universe, or, The Full Fruit of Love’s Full Folly”, in which an impossible romance is made possible. A routine trip to Mercury to investigate why an ore deliv­ery to Mars was misdirected turns into an un­expected and dangerous encounter in “Victory Citrus Is Sweet” by Thoraiya Dyer. It’s crisply written, well-paced, and ultimately optimistic. In “Choke” by Suyi Davies Okungbowa, a Nigerian graduate student (referred to as “you” in the story’s second person narrative style) is invited to a free dinner by a friend. They go, even though the protagonist’s “ancestors have warned that you will choke.” The supposedly friendly gathering grows increasingly tense, and the protagonist realizes there are meanings to the ancestors’ warnings that must be explored. I wanted to like this one more than I did, but I found it a little too unclear to be completely effective. I do intend to look for more from Okungbowa.

The cyberpunkish “Quandary Aminu vs The Butterfly Man” by Rich Larson is set in a booming future Nuuk, Greenland, where violent crime is the norm and biotech so advanced you can make living creatures in a bathtub. Protagonist Quandary Aminu is the quarry of such – a disposable assassin: a short-lived “but­terfly man.” Fast-paced action ensues as Q tries to escape its unrelenting pursuit. But Larson delivers more than a simple good vs. bad chase scenario. Totally terrific.

John Wiswell’s “D.I.Y” is completely dif­ferent, but also enjoyable. In a world recovering from invasion, beset with drought, and lacking for even the most minimal healthcare, wizards have been a help. But now they’ve become as greedy as any other established or­ganization. Two young, geeky, neophyte wizards who also have serious health conditions prove: “There is no educational resource in the cosmos greater than a nerd who thinks you’re wrong.”

Apex 133 is not a cheery issue. In the science-fic­tional “On the Sunlit Side of Venus” by Benja­min Parzybok, astronaut-astrobiologist Leesh, is marooned on a space station on the sunlit side of Venus. Earth has stopped responding. She has everything she needs to continue living but has only Doris, her AI ship, for company. Then they receive a message. Nicely written, but rather de­pressing. Ukrainian author Sergey Gerasimov offers “The Day When the Last War Is Over”, in which war has annihilated the world. Living skeletons are the only inhabitants. Bleak. Paul Jessup’s “The Skinless Man Counts to Five” is a surreal serial murder mystery set on a gen­eration ship in which corpses are found chanting a countdown starting with “five.” Characters are on “the edge of nihilistic despair,” but the story gets even grimmer. The gloom continues with “Nothing That Bleeds” by Leah Ning as the unnamed main character in the second person narration recalls various attempts to save a nameless someone. Plotless, but evocative. The final two stories lift the glumness of the issue, which, considering the themes, may be ironic. Derrick Boden’s “Ten Steps for Effective Mold Removal” uses product reviews to tell of a mold epidemic taking over the world. It’s not a happy tale, but it is clever and blackly comedic, if a little too long. Elderly Patricia, in “Kings and Popes and Saints” by Jon Hansen, may or may not be delusional. Her daughter thinks she can no longer care for herself or her home, but with some assistance from the various kings, popes, and saints hanging about, as well as advice from her cat, Patricia may be doing well enough–and therein lies some real hope.

Uncanny 48 is a stellar issue. Natalia Theodor­idou’s novelette “The Prince of Salt and the Ocean’s Bargain” is a tale of love, desires, bargains, sacrifice, and the power of the story that offers two, or maybe three, endings. “Our Love Against Us” by DaVaun Sanders, set in the near future, is full of striking characters and ideas that deserve a wider palette than a short story can offer. Rati Mehrotra’s “Girl, Cat, Wolf, Moon” is an entertaining if somewhat gruesome tale of magic, murder, transforma­tion, and felines. In Beth Cato’s very short time travel story “The 207th Time I Went Back to March 9, 1980”, a daughter helps her mother escape Alzheimer’s and live her perfect day in the past forever. Lavie Tidhar’s truly enjoy­able “The Portal Keeper” is the diary of the titular character for the month of October. “As One Listens to the Rain” by Andrea Chapela (translated from Spanish by Emma Törzs) is set in a future version of Mexico and features young love and difficult decisions. Tansy Rayner Roberts confronts the question “Can one read too many fairy tales?” to delightful effect in “Towered”. Miyuki Jane Pinckard’s gothic novella “Radcliffe Hall” is the standout for the issue. It has all the necessary elements to make for a fun, creepy, and compelling read – spunky heroine, funky college residence hall standing in for mansion, spooky ghost, moody mystery – written in perfect (updated with lesbian love and confrontation of anti-Asian racism) early 20th century tone.

Uncanny 49 is not quite as strong, but still good. Samantha Mills’s “Rabbit Test” is set in 2091 when women have long lost bodily au­tonomy, but it also traces the history – or rather herstory – of their struggle. Some may find it too didactic, but I felt it was worthwhile reading. Haunted by a “freaky” painting, the protago­nist of Vivian Shaw’s “Transference” seeks to exorcise her nightmares with a tattoo of the hellish artwork. Nina Kiriki Hoffman gently reminds us of the negative effects of words and images with a trip to an interstellar tourist spot in “Travelers’ Unrest”. Matt repeatedly seeks Gary out and starts fights with him for reasons he won’t reveal in Iori Kusano’s story “can i offer you a nice egg in this trying time”. Em­ily Y. Teng considers what is possible in “To Walk the River of Stars”. My two favorites from the issue take place in extremely differ­ent locales. Matthew Olivas takes us to an underworld based in Aztec cosmology in his story of magic and family ties and magic with “The Other Side of Mictlān”. Yue Ling takes her bak chang, a medical and magical soup, to where a general is seeking to destroy an earth dragon in Anya Ow’s “Earth Dragon, Turn­ing”. It’s a multileveled tale that reinforces “the person you should first love most is yourself. To do otherwise is to live in a constant state of self-immolation.”