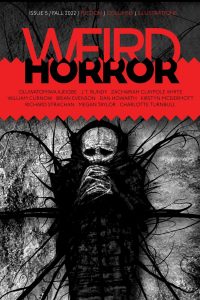 PodCastle 742: “The Morning House” by Kate Heartfield deals with the shifting perceptions of reality involved with an aging parent suffering from dementia and, well, shifting reality.

PseudoPod 828: “Taxiptómy” by Shannyn Campbell presents a consideration of a “con­troversial art of deliberately causing the death of a human as part of a public performance, before preparing and preserving the skin of the deceased person” and the art’s “muses,” who permit themselves to be killed. In PseudoPod 827: “She Works in the Office Where They Died” by Alex T. Singer, 1,082 people died 20 years before in the space where Dezra works – not that the dead seem to notice. Most folks who work there now just forget about them and carry on. As for Dezra, she’s a new hire with plenty to worry about other than the distracting dead. An interesting story that touches on our reactions to all-too-common modern tragedies as well as daily work life.

With its fifth issue, Weird Horror is beginning to move beyond “not-quite-ready for prime time” fiction. Of the issue’s ten stories, four deserve note. “The Rider” by Brian Evenson is not his best, but still exceedingly well written. J.T. Bundy’s “The Shadow of His Bones” is well-executed and has excellent characterization. The story concerns the human costs of nuclear test­ing, but when it left the realm of the terrifyingly real for the supernatural, the story quit working for me. Richard Strachan’s “Coffin Texts” – with its key sentiment of “To be a memory is to take up more space inside the people you love than you did when you were alive” – did deliver for me. Young people following a deadly a viral trend in “Lemmings” by Kirstyn McDermott makes for a real chiller. The slogan “We are the virus. And we are also the cure” is likely to stay with you for a long time. You’ll also learn some facts about lemmings.