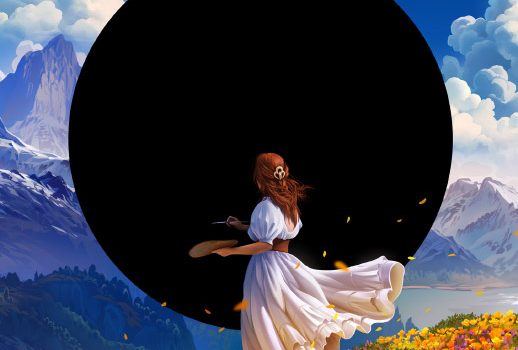 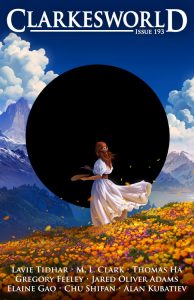 Translunar Traveler’s Lounge starts off its Au­gust issue with a beautiful story, “Raindrop Doughnuts for Women Raining Inside” by Jana Bianchi. Told in second person, you go through life with ghostly (friendly) words ap­pearing in your nonna’s recipe book, offering wise words to help with all manners of life and family situations. The ending has a lovely twist to it. Thea Cooke offers us a nicely literalized metaphor in “The Truth Hunter”. Allegra hunts truths, real monstrous beings that can latch on to the unsuspecting. Still recovering from the loss of her business partner, she takes a lavish royal commission to track down the largest truth she’s ever seen. What can you do with a truth when denial, justification, and defiance aren’t enough? Rajiv Moté brings us a fun story in “Don’t Make Me Come Down There”. Based in Hindu traditions, Brahma just wants to design, run, and then have Shiva destroy different worlds on the way to achieving perfec­tion. But Vishnu keeps going down in different avatars to “fix” things, corrupting Brahma’s experiments. In this mode we get capsule retell­ings of legendary events, along with Brahma’s charmingly exasperated take on the way things are unfolding. Equally enjoyable is “A Date to Memoir” by Rick Danforth. Otto and Vanessa are vampires in the modern world, to which she has adapted better than he. The British Museum has their old love letters on display, and hijinks ensue when they attempt to break in to recover them. Vampires hate being mortified, as it were.

Future SF Digest continues its streak of thought­ful, often charming, fiction from around the world in its sixteenth issue. “Liz’s Tea House” by Rodrigo Culagovski imagines the human narrator landing on a space station in a universe full of the bizarre and quickly getting disori­ented and overwhelmed. She’s directed to the titular tea house, where the proprietress helps her get her bearings. She heads back to the tea house several times after having amazing (off-screen) space adventures, and eventually starts hanging around on a more permanent basis. It’s a lovely take on the sort of Casablanca-in-space trope. In a very short piece, “Their War” by Vanesa L. Perillo, an astronaut and cosmonaut on the ISS really hate each other, and it doesn’t help when active war breaks out between their countries back on Earth. The question is what they will do when each receives a direct order to kill the other. “Services” by Marlon Ortiz imagines a very fancy insurance service where, after your death, a concierge of sorts can keep your consciousness alive for a couple of hours – long enough to, through them, have a last meal or wrap up affairs. Perse does this for Agnes, who is remarkably sanguine about the whole experience. They drive around a bit, mail off the ashes of her wife, call one daughter but don’t mention the recent change of mortality, eat oysters au gratin. It’s a lovely slice-of-life (slice-of-death?) story. I also particularly ap­preciated the perspective in “How the Stars Were Connected” by Zhou Wen (translated by Judith Huang). Friends Ding Xiao Xi and Zhou Xin Yan swap places after Ding fails a psych test to be allowed to migrate through a Starlink/interstellar portal system. Zhou had passed the test with flying colors but didn’t particularly want to emigrate. However, back on Earth, it turns out that people have been using leaked results of the psych tests to discriminate against people in terms of loans, rentals, credit, etc., and Zhou is now suffering from being as­sociated with a “failed” test. In the meantime colonies established by the Starlink program are starting to fail, ceasing communications with Earth. There’s a lot to think about here in terms of social cohesion and the risk of groupthink.

Clarkesworld in October is a natural home for the bizarre, as showcased particularly in a few of the stories this month. “Coding Van Gogh” by Elaine Gao imagines a cyberpunk future where most art has been lost and many people have to resort to renting out their brains for corporations to use as servers. In this world, Tara wakes up with a prosthetic arm, death certificate, and almost no memory of how she wound up in this state. She returns to the mu­seum where she had been coding up the works of Van Gogh, but the curator is curiously eager to get her out of there. “Fly Free” by the late Kyrgyz author Alan Kubatiev (translated by Alex Shvartsman) imagines a world where birds have completely taken over society, and humans are kept around only at their sufferance. Crowley is a translator, and we meet him at the trial of some chicken farmers – it doesn’t go well for them. His friend (an avian) Raven tips him off that he’s suspected of violating one of the major rules, in that he’s been clandestinely harboring a kitten. The situation quickly gains life-or-death stakes. “Giant Fish” by Chu Shi­fan (translated by Stella Jiayue Zhu) imagines K’un, a giant being that was presumed to be im­mortal – until its corpse crashed down to Earth. People start mining the corpse, as its flesh is a delicacy, but it also turns out to be narcotic and addictive. Seeking his fortune, one fisherman joins the mining efforts, and eventually sends his son away to avoid getting sucked into the same life. From a separate island, the son bears witness to the millions of pilgrims that swarm towards K’un’s remains, and the consequences of such a migration. “Rondo for Strings and Laserguns” by Jared Oliver Adams imagines musician Chasca Huyapaya, who became a famous prodigy for playing Quispe’s Rondo for Cello and Orchestra. She loses feeling in her hands after a plane crash and enlists in the Terran Protectorate to fight off space Phages and, she hopes, gain access to rehabilitation treatments. Even without her old fine motor control and using a 3D-printed cello, music still has amazing power.

Two stories continue series that the authors have been developing. “Lost and Found” by M.L. Clark is centered on the planet Drasti Prime, now evacuated by all sentient species at the order of the biocomputing Spinners. Essen is a representative of the human Partnership, responding to a beacon that a human ship is there and in distress. When she and her crew of rather charmingly anthropomorphized bots board the ship Kir-Anin, they find only voids where any of the crew would have been. The solution to the mystery requires shedding quite a few preconceptions. “The Secret Strength of Things” by Gregory Feeley is set on and around Triton, where a Kitsune bot is evading Snow Woman, an artificial being who is ap­pointed to protect the moon. A cat-and-mouse game ensues within seas of liquid nitrogen, the kind of exotic setting and trickster plot that is catnip for traditional SF fans. 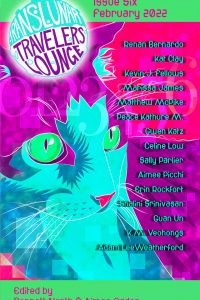 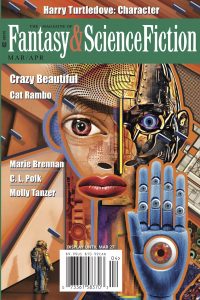