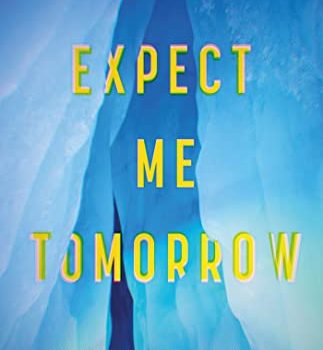 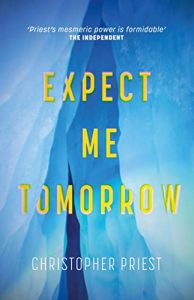 Christopher Priest is another author who writes with an illusionist’s skill about shifting reali­ties and identities, not only in his long-running Dream Archipelago sequence of stories and novels, but in such haunting works as The Separation (2002), in which the contrasting adventures of twin brothers lead us into alter­nate versions of WWII. Twins show up again in Expect Me Tomorrow – two sets of them in fact – but now the time frame extends from 1877 London to a 2050 England devastated by climate change. While climate disaster becomes one of the novel’s central themes, Priest’s own version of cross-time communication (what the SF Encyclopedia calls “time radio”) ingeniously links the two disparate time frames. But before we meet either set of twins, Priest opens with an account of a real-life Victorian confidence man who went by the name of John Smith and was convicted of swindling several women back in 1877. It takes a while before we learn how his tale becomes tangled with that of Adler and Adolf Beck, Norwegian-born twins whose father disappeared while exploring a famous glacier. As adults, Adler becomes an accomplished glaciolo­gist, increasingly concerned about how glaciers may be harbingers of a changing climate, while the far less disciplined Adolf eventually forges a peripatetic career as an opera singer in the Americas, though he also ends up spending time in prison for reasons best left unmentioned here. Both, however, are occasionally visited by mys­terious voices that literally freeze them in place.

In 2050, another set of twins, Charles and Gregory Ramsey, a police profiler and a journal­ist respectively, struggle to survive in an increas­ingly uninhabitable southern England. Charles, or Chad, has lost his police job, but not before he’s fitted with fancy new technology called IMC, in the form of a graphene shield embed­ded in his cranium, which makes it “possible to link the device to his phone, all available TV, radio and streaming channels. The internet was constantly online at a speed much higher than any of the advertised commercial packages, and the IMC was its own cloud and browser.” Long intrigued by a scandalous and near-legendary family figure named Uncle Adolf, Chad is able – with the aid of a bit of energetic handwaving on Priest’s part – to combine the new technology with some old DNA traces and thus to commu­nicate back in time with the Beck twins.

But family mysteries and a real-life case of mistaken identity are hardly the only things going on in Expect Me Tomorrow – a phrase used by several characters in different contexts, but one which takes on an ominous undertone in the context of climate change, which turns out to be the thematic fulcrum of the novel. Fascinated by the advances and retreats of the Norwegian glaciers, and by the temporary global cooling caused by the volcanic eruptions of Mount Tambora in 1815 and Krakatoa in 1883, Adler Beck undertakes research which leads him to conclude that Europe is imminently in danger of another Ice Age. While he does learn of the English scientist John Tyndall’s emerging theory of greenhouse gases and other evidence of global warming, he concludes that such warming would at best mitigate the effects of the coming Ice Age, and he even publishes an awful-warning book in 1905, though it apparently has no influ­ence. Meanwhile, back in 2050, temperatures in England have soared to barely survivable levels, “coolcabs” are the necessary form of transporta­tion, and southern Europe has turned into a dust bowl, while wars, famines, droughts, and viral plagues are almost universal. “Countries on the Bay of Bengal were inundated, and much of Kolkata had been evacuated. Jakarta, the Pacific Islands, the Netherlands, the massively industri­alized Pearl River delta, the shallow Venetian Lagoon, the eastern seaboard of the USA – all were flooded or unlivable.”

While the contrast between Adler’s chilly vi­sion of climate doom (not entirely unreasonable, given the evidence available to him) and the ac­tual catastrophes of the 21st century lend a sense of cosmic irony to Expect Me Tomorrow, the novel’s emotional center lies in the intertwined stories of the Beck twins and the Ramsey twins. We learn a good deal about Adler’s research career, including his eventual marriage and children, and of Adolf’s musical career (again involving some actual historical figures) and his unfortunate legal problems. In different ways, all these disparate tales call into question the very nature of interpreting evidence and building hypotheses. Chad and Gregory Ramsey, though, seem more like characters in an SF novel, Chad coming to grips with a new technology which turns out to be more invasive than expected, and Greg never quite fully emerging as a main actor. Nevertheless, as with the best apocalyptic fiction, the power of the tale lies with the challenges, ambitions, and failures of a fascinating extended family living in two vastly contrasting – but inescapably linked – historical eras. 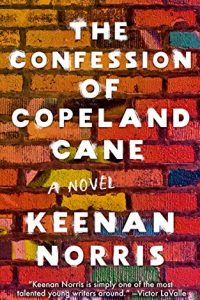 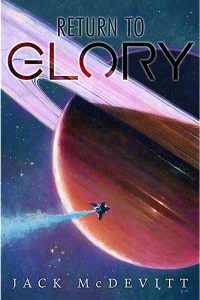