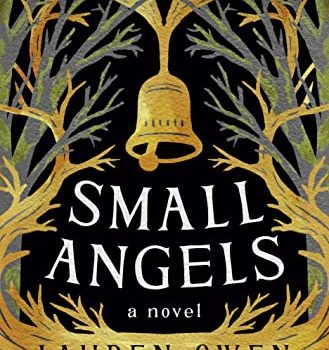 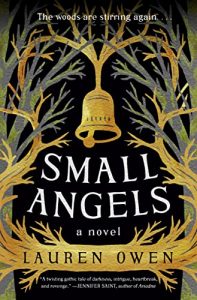 The Mockbeggar Woods like stories. If you go to the woods and tell it a story, you may well feel the trees responding. And sometimes a particularly resonant story might be one that the trees decide to keep, and keep alive. This might be a comfort if you think the woods will keep the memory of a loved one alive. It’s not such a comfort if the story they hold on to is one of vengeance and anger.

Lauren Owen’s gothic tale of family, small towns, and the stories we tell is her first since her 2014 debut, The Quick. It’s a novel of many parts, with two narratives set in the now: the first built around Chloe Day, the second around Kate Unthank. Having met Sam Unthank in London, Chloe has come to Sam’s home – the village near Mockbeggar – to get married. They’re getting married in the quaint little church St Michael and All Angels, which everyone calls Small Angels. At their combined stag/hen night, in the local pub, the local historian tells Chloe the story of Small Angels: that the church belongs to the Gonnes, a family who have lived next door to it for a century, and that they have followed unusual traditions for as long as anyone can remember – the ringing of bells, lighting of beacons, and a monthly walk to Small Angels at full moon. And visiting Mockbeggar, too, which is not something that other villagers have felt comfortable doing for a long, long time. Chloe is initially undaunted; but, as with any good gothic novel, there is a gradual building of tension and unease as the week progresses and more unexpected things occur. In the same timeframe, Kate Unthank has been reluctantly drawn home by this wedding: she has troubled memories of her childhood in this village, particularly around her unorthodox friendship with the Gonne sisters. Nonetheless, home she comes, and she finds herself drawn back to the Gonne farm and its mysteries. These two stories largely work in parallel – even though it’s a small village, Kate and Chloe have their own concerns – but given that everything centers on the Gonnes and Mockbeggar, it’s no surprise that they eventually pull completely together.

Intertwined with Chloe and Kate’s stories are two others, both of which give the history of the Gonnes, and contribute to the tension while unravelling some of the mysteries. One is that of Lucia Gonne, the youngest of the children who are Sam and Kate’s contemporaries. Her history, gradually revealed, shows a childhood in some ways idyllic – haphazard education, playing in the woods with her sisters – but also hemmed about by a stern grandmother, strict rules, and the knowledge that the family owe a debt to Mock­beggar and what lives there. Lucia is discontent with all of this, and eventually breaks a cardinal rule: taking a forbidden path, and befriending what she finds, which becomes a leading cause of the narrative’s climax. Finally, around all the other parts of the novel, are Selina’s stories. Selina is Lucia’s grandmother, married into the Gonnes but fiercely determined to keep their traditions. Her stories slowly reveal exactly why the Gonnes do what they do and what Mockbeg­gar is capable of.

The multiple narratives are an absorbing and fascinating way to build this story: layer upon layer, gradually revealing part of the structure, adding supports and occasionally ripping them away, until eventually the final shape is revealed. “Gradually” is a key word here; this is not a fast-paced narrative. (If you’re looking for action, go elsewhere.) Instead, words like ‘languorous’ spring to mind: as is fitting in a gothic novel, it’s all about a gradual building of tension and atmo­sphere as history is revealed and key elements come together. It’s also deeply character-based, which feels rather odd to claim because actually, you don’t learn all that much about the lives of Chloe or Kate outside of this week; and while Lucia’s childhood is closely examined, that’s a long time ago in the context of the story. Maybe it’s like those friendships you develop on holiday camps: you may not know much about the person outside of camp, but you know them truly and deeply for the length of that adventure. If this were a holiday camp, though, the kids would probably need counselling. 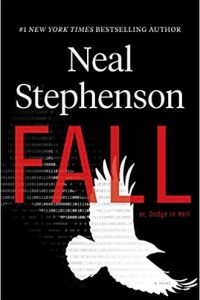