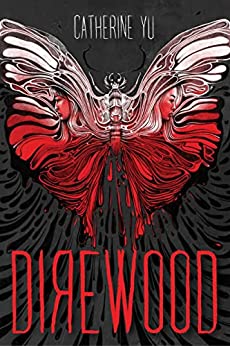 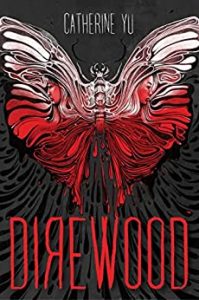 Sisters Fiona and Aja are part of the only Chinese American family in their entire suburban town. It’s the 1990s, the era of grunge and disillusion­ment, and no one is more disillusioned than Aja. Or so she thinks. Fiona is the golden child. She is the perfect daughter beloved by everyone in town. Aja, meanwhile, is rough around the edges and sharp-tongued. Where Fiona is soft and polite, Aja is brittle and rude. Then one day, strange white caterpillars appear, the trees around town start dying, and Fiona vanishes without a trace.

Aja discovers that the people behind her sister’s disappearance are Kate and Padraic, newcomers living in an abandoned church deep in the woods. They also happen to be vampires. Padraic lures Aja to his lair with the promise of answering all her secrets, but what she finds there is worse than she could have imagined. Two other classmates are living there as the vampires’ thralls, yet Fiona is nowhere to be seen. The more Aja digs, the less she understands. There is something big and terrible that Padraic and Kate aren’t telling her about what is in that church and why they came to this town. To expose their darkness to the light, Aja must descend into the depths of depravity, literally and metaphorically.

I can’t speak to the Asian American experience, but I do understand what it’s like to grow up as being one of the only Black kids everywhere you go. Back in the 1980s and 1990s, in my predominantly white hometown, Black people made up only about 0.5% of the population, and white people made sure I knew just how different I was. This was largely before the internet, so for me, the only examples I had of Black life were my family and sitcoms. For most white folks, I was not a person but an avatar for Blackness. To them, I existed in one of these three states: as the token Black friend (even if I was barely acquaintances with them); as the person expected to answer for all Black people, especially those who did not live up to whatever arbitrary and impossible standards white people were mad about that day; or as the person representing all Black people and who therefore had to be “respectable” and “eloquent” at all times. It took years of work – not to mention getting away from my hometown – to unlearn all of the bad expectations and assumptions I had brainwashed into me.

Reading Direwood dredged up a lot of bad memories, which only added to the horror. Fiona and Aja are deeply damaged by their experiences as the only Chinese Americans in their town, just as I carried around a lot of baggage from my own childhood. You really have no idea what it’s like growing up like that unless you’ve been there. The temptation to escape, the desperate need to breathe free, the feeling of constantly being on and on guard, the constant stress of living in a swamp of microaggressions and “polite” racism, it wears on you. I recognized in myself Aja’s prickly frustration and Fiona’s skill at playing the part. In all honesty, if a vampire had turned up at my doorstep offering to whisk me away from my oppressive hometown, I would have been inclined to take him up on it, too.

I personally don’t care for creepy-crawlies or body horror, both of which are in Direwood, but there was just the right amount of terror for a young adult novel. Yu is good at knowing when to keep going and when to take a break. Teens could easily read this novel without feeling overwhelmed. Most of the horror lies in the an­ticipation, or, more accurately, the apprehension. Many teens might believe as Aja does, that she can change Padraic and that maybe deep down he’s not as bad as he seems; adults know otherwise.

I have no idea if this was intentional on Yu’s part, but as someone who was a WB-obsessed teen in the late 1990s, I took Padraic to be a call out of the trope of the older hot vampire dude trying to seduce the naive teenage girl, especially as it relates to the TV show Buffy, the Vampire Slayer. For those of you not inducted into the Buffy-verse, Buffy’s main love interest in the early seasons was Angel, a 270-year-old Irish vampire. She’s 15 when he first lays eyes on her and 16 when he falls in love with her, takes her virginity, and then tries to kill her when he turns back into the monster, Angelus. Ah, the joys of letting creepy dudes write romance story lines involving teenage girls. The point is that Padraic and Angel have similar enough backgrounds that it was hard for me to not see the parallels – and, crucially, the way Yu gradually dismantles that trope to reveal the patriarchal creepiness of it all.

Direwood is a very good YA horror novel. It’s distressing and disturbing, but ultimately unput­downable. On a final note, if you want more Yu horror, check out her story “Balloon Girl” in the excellent anthology Death in the Mouth: An Anthology of Original Horror by People of Color, edited by Sloane Leong and Cassie Hart.