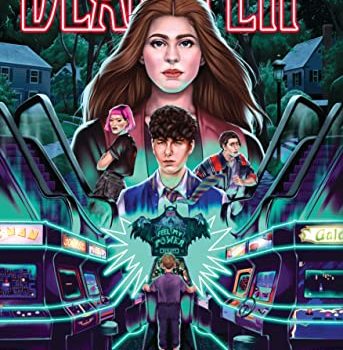 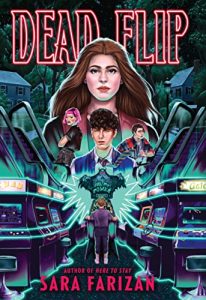 The premise for Sara Farizan’s latest novel Dead Flip is right up my alley. Set in 1987, it’s about 12-year-old Sam who is kidnapped by a ‘‘supernatural pinball machine’’ and then returns, without aging a day, five years later. The vast gulf between 12 and 17 is perfect fodder for conflict and the mystery of how and why Sam disappeared, and what his friends did after he was gone, is extremely appealing. As it happens, I am a product of the ’80s with a well-deserved love for pinball. (Everyone should love pinball!) I was eager for Dead Flip to deliver the drama and am happy to report that Farizan gives readers a thoughtful thriller along with some very realistic surprises.

As middle schoolers, Sam, Cori, and Maz are good friends, the kind of group who love horror movies, comic books, pinball, and riding their bikes looking for something to do. Maz has a crush on Cori’s older sister, who is kind of a stuck-up jerk, while Sam is a bit feral, with a largely absent home life, and spends way too much of his time letting his mouth get him into trouble. It’s Cori who is laboring under the biggest secret of all though, as she’s fairly certain she is gay but doesn’t know how to tell anyone (or if she should). (Remember, this is 1987.) The three of them work as a sort-of-not-cool-but-not-bullied little crew who need each other more than they are willing to admit. They get along in every way that matters and they forgive each other’s mistakes. But being twelve is not the same as being thirteen and, in small but worrisome ways, Sam senses that the edges of their friendship are starting to fray. Then a new pinball machine arrives at their favorite local store, and he gives it a whirl, and nothing is ever the same again.

When Sam disappears everyone else thinks he’s a runaway. Even Cori decides to accept that convenient but unlikely excuse. But Maz is certain the pinball machine stole their friend. After a few minutes with the police, he realizes that telling anyone his suspicions about the game will get him nowhere, or worse, so he buries it deep. Before they know it, Maz and Cori are locally famous as the friends of the kid who vanished, and then Maz and Cori aren’t even friends anymore. More disturbingly, as the years go by they aren’t even themselves. Then it is 1992 and twelve year old Sam has suddenly returned, and Maz and Cori have to deal with what that means and also, more seriously, what Sam has come back to do.

Farizan does a couple of things structurally that really work for Dead Flip. The decision to move the narrative back and forth between 1987 and 1992 and among the point of view for all three protagonists provides much appreciated insight into Sam, Maz, and Cori’s varying motivations in both timelines. I especially enjoyed the direct insight into their younger selves, which makes Maz and Cori’s transformation as older teens that much more significant. Upon his return, Sam is rightfully horrified by how his friends have turned out and more than anything else, this proves to be the catalyst that forces the novel’s major confrontation. While there is something very bad about the pinball machine, (and getting to the bottom of that makes for some fun mystery-solving), it is Maz and Cori’s failures in the eyes of their younger friend that stand out. He is the one who has been in peril, but they are the ones who gave up. In the end they all need rescuing, and despite being a bit obnoxious, Sam is the novel’s surprise hero. He reminds his friends who they used to be, and who they wanted to be, and that reminding makes all the difference.

The supernatural elements of Dead Flip remain murky (though there are a couple of decent vil­lains), and Farizan does not provide a tidy ending, but her choices ring true to the story. The novel’s retro feel is solid and all the ’80s references work as effectively here as they do on Stranger Things. (If you are a fan, you will enjoy Dead Flip.) It’s the sincerity of Farizan’s characters that really stood out for me, though. All the ways that friends come together and fall apart on are on display in Dead Flip and if you ever were lucky enough to be that twelve year old with the best friends in the world, then you will recognize Sam, Maz, and Cori. We all get lost a bit while growing up and while Dead Flip is about a supernatural pinball machine it is also, importantly, about finding our way home again, no matter how dark the path has become. 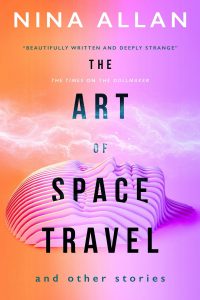