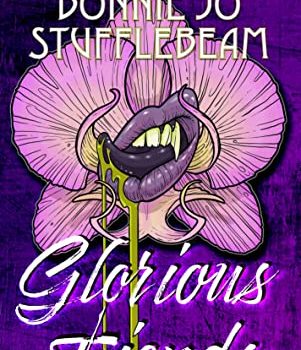 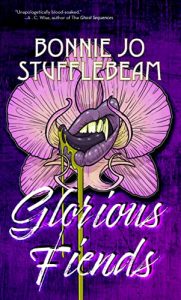 I’m a child of the ’80s, raised on camp, kitsch, and all that is lowbrow, and nothing can ever rinse clean what late-night broadcast televi­sion horror films (not to mention all the Anne Rice and VC Andrews I read in primary school) did to my soul (even if I wanted to). So, Bonnie Jo Stufflebeam’s latest novella, Glorious Fiends, appealed to me in an elemental, sentimental way.

Unlike other Stufflebeam work, Glorious Fiends is not high art – and that’s partially what’s marvelous about it, and its writer. Every time a critic or bookseller believes they can pigeonhole Stufflebeam into a specific subgenre, she pivots and delivers something totally different. This is a hard trick to pull off, and one that writers as a species, in general, avoid even trying (with, of course, notable exceptions). There are, of course, the author’s obsessions that thread, book-to-book, and while Glorious Fiends is very much its own splattery, B-film light horror confection, it has heart and compassion, an unflinching look at how female friendships really work, and the nature of true forgiveness.

Super bad-ass, selfish vampire Roxanne cares about only three things: feeding, pleasure, and her best friends, Medusa and Mx. Hyde (yup, they are exactly who you think they are). We first meet Roxanne fretting at the Great Library of Evil, with the remains of her two friends. They lost a battle against famed monster killer Abraham Lee Vansing, and Roxanne, the only survivor, has to resurrect her friends (which she does, handily). However, the resurrection has angered the powerful, extremely unpleasant Guardian of the Underworld. The Guardian does not like any alteration to his plans – and he had big plans for the formerly-dead two friends. So, he offers Rox­anne a trade: the lives of three other monsters for the permanent release of Medusa and Mx. Hyde. Otherwise, he will come back for both of them, and take Roxanne along, too, as compensation.

Roxanne takes the deal. Seems simple enough. The Monsters Three, in the regular course of their adventure-seeking, carefree (un)lives kill routinely – for food, for fun, and for science (on the part of Mx. Hyde, anyway). But the best laid plans of man or monster gang aft agley. The monsters the Guardian has ordered killed are the three that will be most difficult for the trio to kill. The difficulty has nothing to do with the condemned’s strength or powers, however, but because each of the three was specially chosen because they will hold an undeniable, irresistible appeal to one the three friends.

That the Guardian has also ruled that the three cannot kill more than three innocents before they complete their task adds an additional layer of complexity to the quest. Neither Roxanne nor Medusa can feed to full strength, and Hyde won’t be able to extract the serum they need from the glands of dead women to maintain their form. So, they will meet their literal matches at a decided disadvantage – still, armed with some basic information supplied by the half-spider librarian of the Great Library, the three friends set off to satisfy their end of the bargain.

Needleskin is a clever, sexy Cenobite-like woman creature, lusty and as mas­ochistic as she is sadistic. She is, by all respects, the perfect mate for the psycho­sexual Roxanne. Zeeka, a rogue scientist obsessed with transmogrification – to the point where she is more mosquito than woman – is foil to Mx. Hyde, a brilliant scientist herself, who turned herself from male to female, then worked to be able to embody both simultaneously. The third and last condemned is Hector, a former vampire-killer now possessed by a demon. His demonic side allows the otherwise sensitive, sweet Hector the ability to hold Medusa’s gaze safely, which, for the lovelorn Gorgon, is halfway to winning her heart. Shenanigans ensue. Gory, silly she­nanigans, but ones which challenge the bonds between the three best friends.

They all behave, in their own way, very badly. Roxanne sleeps with, but fails to kill, the unpleas­ant and captivating Needleskin, even as she easily and unthinkingly slaughters innocents, endanger­ing the whole mission. Mx. Hyde is entranced by all the bells and whistles of Zeeka’s lab to the point of nearly sacrificing all their lives. Medusa falls snake-haired head over heels for Hector, and decides that he is her soulmate. Each of them potentially brings doom to all – unless they can pull together and carry off a last-change, Hail-Mary plan to get rid of the Guardian himself.

In the end, love (albeit evil and demented love) wins, and (bless Stufflebeam for somehow doing this well) grow as people… er, monsters, and as friends. Each of the three get exactly what they want. Medusa gets unconditional love. Hyde gets to live a life of learning. Roxanne, well, she gets to continue making chaos wherever she goes. And their bond is as strong as ever between three friends, monsters or otherwise. 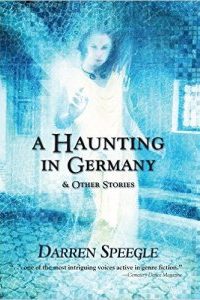