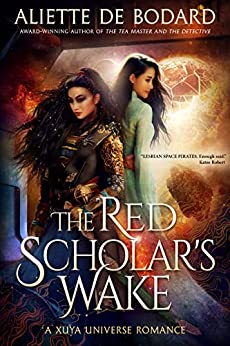 SF novel about a lesbian tech scavenger in a marriage of convenience with a sentient pirate spaceship.

Clare, Gwendolyn: In the City of Time

Young-adult time-travel novel, the first in the eponymous duology, set in the world of Ink, Iron, and Glass. In 1891 a young researcher discovers a mysterious signal, while in 2034 a cataclysm has rendered Earth uninhabitable, and attempting to use a time machine to set the past right only makes things worse.

Genre-bending epic fantasy, third and final in the Five Warrior Angels trilogy. When an apocalyptic crusade comes to the remote border of Gul Kana, that belief that magic isn’t real is shattered, as is the tenuous peace that held the Five Isles together.

Ernshaw, Shea: A Wilderness of Stars

Young-adult fantasy novel. An illness cursing the land forces a teen girl astronomer to venture across the wilderness in search of the stars’ message that will, hopefully, save them all.

Dark fantasy novella. Annae, a grad student in psychiatric magic who can read minds, learns how one Doctor Górski, an academic magician, turned himself into two by putting his “undesirable” qualities (kindness, charm, empathy) into a homunculus.

Fessier, Michael: Fully Dressed and in His Right Mind

Collection of the title noir crime novel with fantasy elements (Knopf 1935), plus three stories from 1953. Introduction by David Rachels.

Horror novel, sequel to The Hungry Earth. Medical examiner Dr. Laura Powell investigates how a man who died that day could leave a petrified corpse.

Lemberg, R.B.: Geometries of Belonging and Other Stories

Collection of 11 pieces of poetry and prose in the Birdverse series, one new.

Fantasy novel, third in the Ironheart Chronicles series. Maggy has reached the floating city of Meridion, where she intends to fight for the rights of other Moon Children stuck in the Pits.

Fantasy novel, 17th in the Chronicles of Elantra series. Kaylin becomes concerned about an elderly woman who likes to report things told to her by ghosts.

Paranormal romance novel, the second in the Lair of the Wolven series set in the Black Dagger Brotherhood world.

Young-adult fantasy novel. The young man called Saint has a reputation of piety, but his belief in the myths and legends of the sea is tested by a young woman with secrets.

Paranormal ghost story. Sara spots a youthful apparition of her grandmother and starts digging into her past. 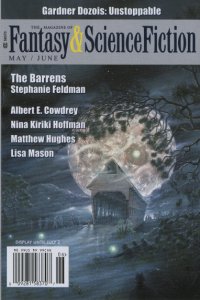 Charles Tan maintains the blog Bibliophile Stalker. He has contributed to and edited projects that bring Philippine SF to the wider world, such as the Philippine Speculative Fiction Sampler. He is also a frequent contributor to SF/F sites such as SFSignal. While I was always a fan of mythology and the fantastic, it wasn’t until grade seven that me and my best friend decided that we wanted to read fantasy